Posted on May 15, 2013 by myhomefoodthatsamore

The mystery as to the origin of this saucily named pasta dish is not going to be solved any time soon but it would seem that Naples and thereabouts (Ischia) are good contenders.

This is the version that I favour: “In a 2005 article from Il Golfo—a daily newspaper serving the Italian islands of Ischia and Procida—Annarita Cuomo asserted that sugo alla puttanesca was invented in the 1950s by Sandro Petti, co-owner of Rancio Fellone, a famous Ischian restaurant and nightspot.[5] According to Cuomo, Petti’s moment of inspiration came when—near closing one evening—Petti found a group of customers sitting at one of his tables. He was low on ingredients and so told them he didn’t have enough to make them a meal. They complained that it was late and they were hungry. “Facci una puttanata qualsiasi,”or “Make any kind of garbage,” they insisted.a[›]  (“In this usage, puttanata is an Italian noun meaning something worthless. It derives from the Italian word for whore, puttana.”)

Petti had nothing more than four tomatoes, two olives and some capers—the basic ingredients for the sugo, “So I used them to make the sauce for the spaghetti,” Petti told Cuomo. Later, Petti included this dish on his menu as spaghetti alla puttanesca.”

I happen to have a soft spot for prostitutes because I really can’t imagine it being much fun as jobs go, even though there will always be some clever dick (ooops … the pun just slipped out!) who will remind us that prostitution is the oldest métier in history.  Though not one to be be drawn to novelty for novelty’s sake, I nevertheless think it highly fatuous that so many people tend to sit on the fence when it comes to prostitution simply because it’s been around for thousands of years. So have depression and disease … but we don’t think of these phenomena in shoulder-shrugging terms just because they have been such a close and very unwelcome companion to humanity’s heritage.  The ways of sex are truly mysterious, granted, but love-for-sale is an oxymoron and the sad truth is that … prostitutes are never loved.  Think about it.   Recieved wisdom (wisdom?) views prostitution as an accepted ‘necessity’ of society (and I believe that prostitutes even pay tax in countries such as Switzerland and Holland) but a prostitute will, and can, never command respect and admiration within that same society … not the way a nurse will, or a teacher, or  any other vocation.  Am I making this up?  To me, prostitution is a form of slavery and when one reads of the horrific backgrounds of most of the poor girls’ curriculum, the whole ‘business’ smacks of base abuse.  Here is an article that might be of interest: Hhttp://www.guardian.co.uk/society/2012/dec/26/government-pressure-review-prostitution-laws . 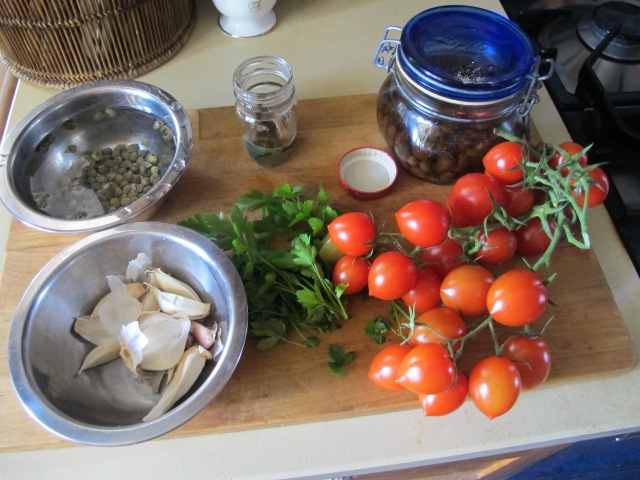 I decided to add a little crunch factor …. and here you see breadcrumbs on the left and a little pan with olive oil in it on the right.  The idea is to toast the breadcrumbs in the oil and then sprinkle them over the pasta just before serving. 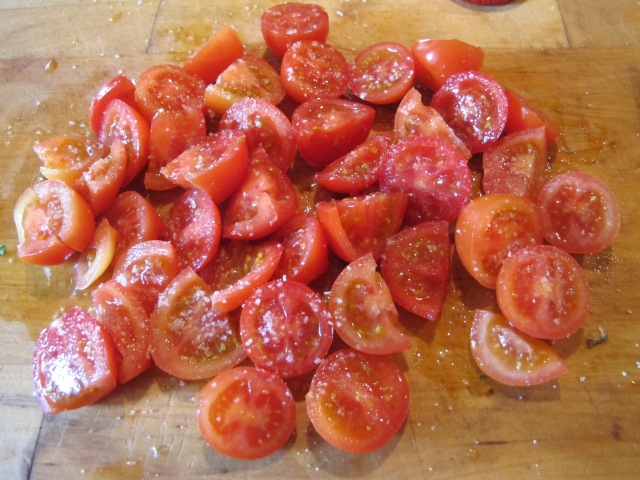 I cut up the tomatoes and sprinkled salt over them …

Chilli … this is fresh peperoncino (chilli pepper) …  which is also a good addition. 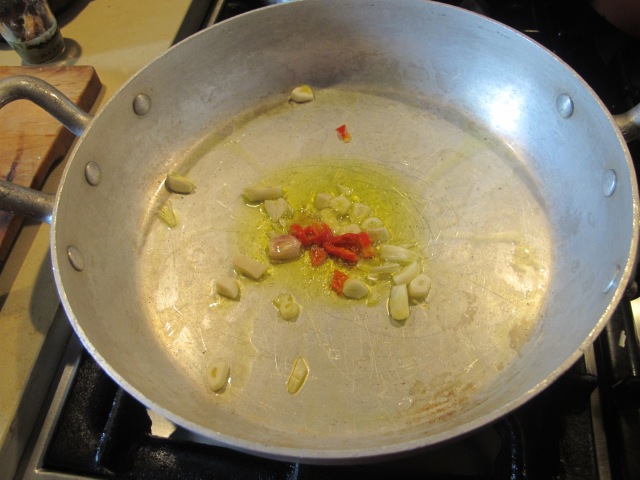 Add as much or as little of the fresh peperoncino … if you don’t have any of the fresh, you can always substitute with dried chilli flakes.  Please note how I have poured in the oil in the middle of the pan, so that what we get is like a ‘puddle’ of olive oil.  This is because if you spread out the olive oil too thinly over the surface of the pan, the garlic won’t get properly coated and the olive oil will not get ‘scented’ with the garlic taste.  You could, alternatively, pour the olive oil to one side and tilt the pan at 45° over the source of heat.

I then added some anchovy fillets.  I realise that it can be very annoying to not be given precise quantities … but that is because it all depends on people’s personal taste.  I think that the ‘eye’ is a very good gauger of quantities and this is one of the main reasons for my taking the trouble to chronicle a blow-by-blow explanation of any recipe.

Add the olives when the garlic has turned golden.  Please realise that the above steps are in quick succession and it didn’t take more than about 5 minutes to get to the adding the olives stage.

And, finally, add the tomatoes and cook for a few minutes.  Now is the time to start cooking your pasta (i.e. adding it to the salted, boiling water).  While the pasta is cooking, you can start toasting the breadcrumbs. 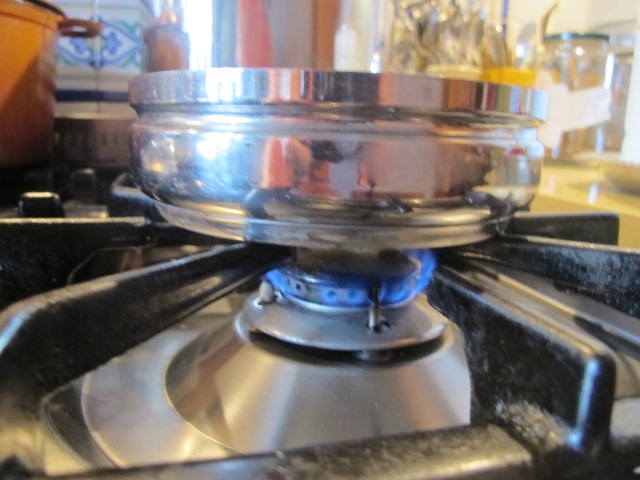 Here is the little pan with the olive oil in it … 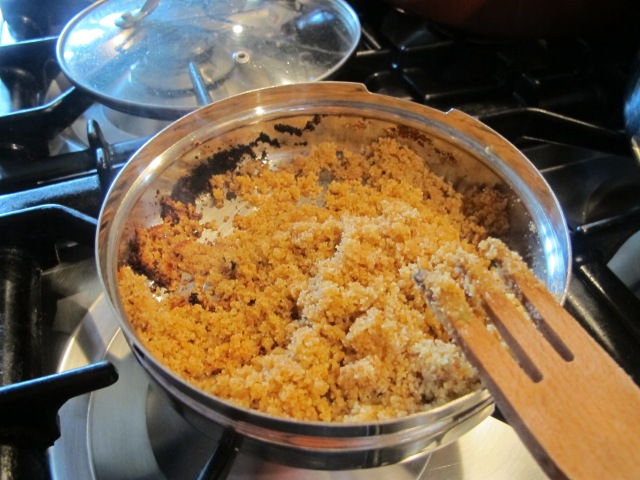 Add the breadcrumbs and cook them for a few minutes until they turn crisp.  Use a wooden spoon or fork to stir them a bit and be on the look-out for any hint of overcooking, otherwise known as burning! ayeee ayeee ayeee … mine had just started to burn if you look carefully on the top left of the photo … and fortunately I was able to save the rest. 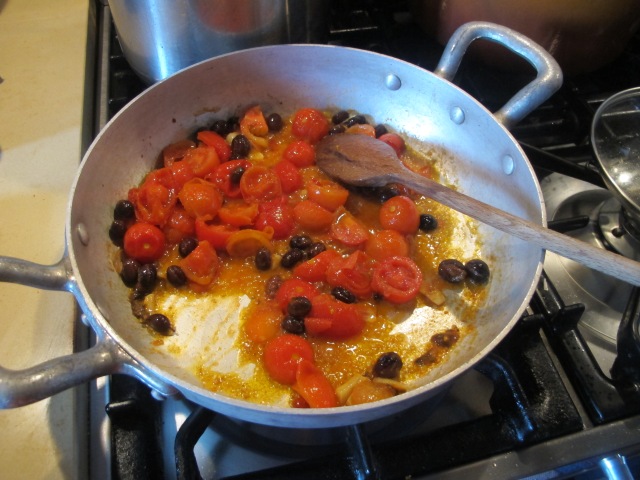 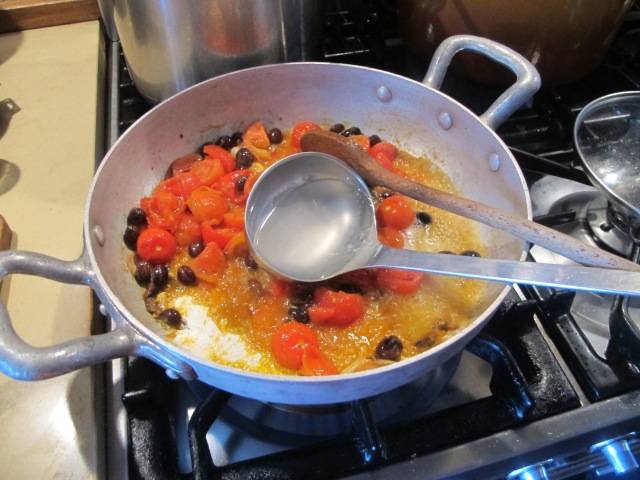 When the pasta is almost but not quite ready to drain, take a ladleful of the cooking water and add it to the sauce.  Turn the heat on again …

Then drain the spaghetti and place them directly into the pan with the sauce.  Turn the heat up and toss the spaghetti with the help of two utensils until the pasta has absorbed al the sauce.  Add a little more of the cooking water if you think it looks a little ‘dry’.

Sprinkle the toasted breadcrumbs over the top and garnish with a leaf or two of parsley.

It is a very ‘hearty’ pasta dish and not for the faint-palated.  When you are in the midst of enjoying it and taking in the various flavours, it is the sort of dish that makes you think: why don’t we make this more often?  A welcome variation, brought to my notice by my friend Liz, one of the best cooks in real life whose food I have the pleasure to eat, is to put the tomatoes in the oven to cook over a low heat, confit style, drawing out the intensity of the tomato.

10 Responses to Hounded by the Whore – Pasta alla Puttanesca