Posted on February 2, 2015 by myhomefoodthatsamore

Yesterday I wrote about some leftovers … see photo below:

Here are the remains of what had been meatballs cooked in a tomato and pea sauce.  These leftovers could have easily been used to coat a lovely plate of pasta but, somehow, and blame it on the cold weather if you will, I was in the mood to ‘cook’ yesterday … i.e. to spend some time fiddling with the minutiae of ingredients, pottering with ‘bits’ to my heart’s content, my small scaled kitchen groaning under a welter of pots and pans, and aluminium bowls and wooden boards.  I knew the oven would have to figure in the picture somehow (what can be pleasanter than a hot oven on a cold day?) … and thus it was that I got inspired. Inspired to make a rice-based dish called ‘sartù’ … with its princely origin in Campania … and one that is usually made only for special occasions.   The list of ingredients is mind boggling … I am surprised that Ottolenghi hasn’t had a look at it and succumbed to the sheer number!

I had only made sartù once before, about seven years ago, at a cooking class at the Gambero Rosso School, under the kind and knowledgeable supervision of Chef Sandro Masci (who is now at the head of Rome’s Les Chefs Blancs – http://www.leschefsblancs.it/).   He made it all sound so straightforward and do-able … but you can’t fool me and by the time we were assigned the task of creating tiny tiny meatballs (and I mean lilliputian) I knew that this wasn’t a recipe I was going to repeat any time soon — not unless I had a lot of helpers around me to give me Dutch courage.

Such is life, however, and there I was yesterday … postively gagging to have a go at sartù making and — which goes totally against the traditional culinary grain in this case — using leftovers to boot! Veeery naughty, veery adventurous.  So … I promise I will make a proper sartù before the year is out, following my printed recipe from the Gambero Rosso lesson, starting from scratch.

In the meantime … this is what I did yesterday, on a very cold Sunday, and wearing warm socks. 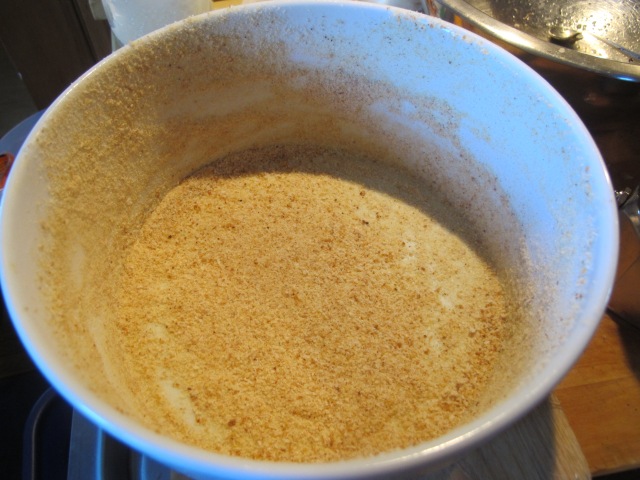 Butter a deep oven-proof pan and coat it with breadcrumbs.

Get hold of another 2 eggs and beat them when the time comes.

Avail yourself of some mozzarella, chop it up, and let it stand in a colander so that any excess liquid can ooze away. 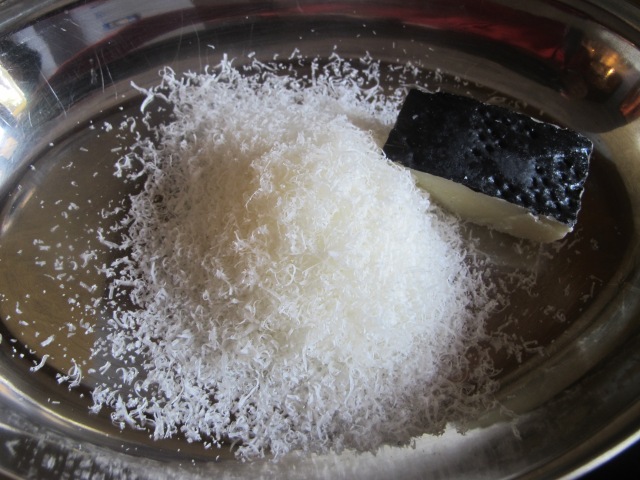 Soak a couple of dried porcini mushrooms in hot water.  After about 10 minutes, drain and roughly chop. 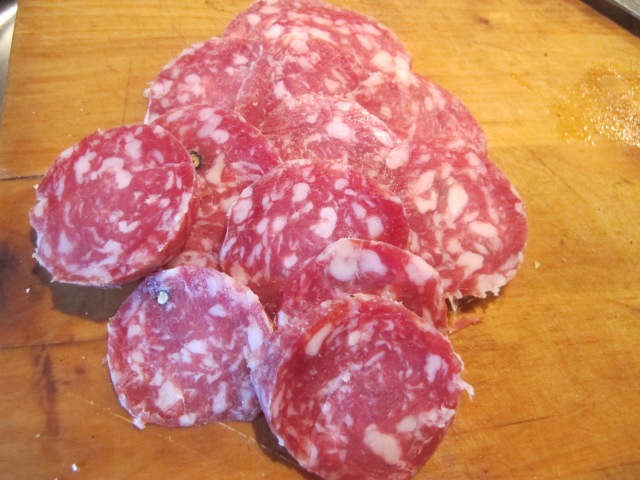 A sartù will normally use boiled sausage in its mix.  Only I didn’t have any … and so used some lovely salami instead (salame di Felino if you wanted to know).  Cut up a few slices thickly and then chop into quarters. 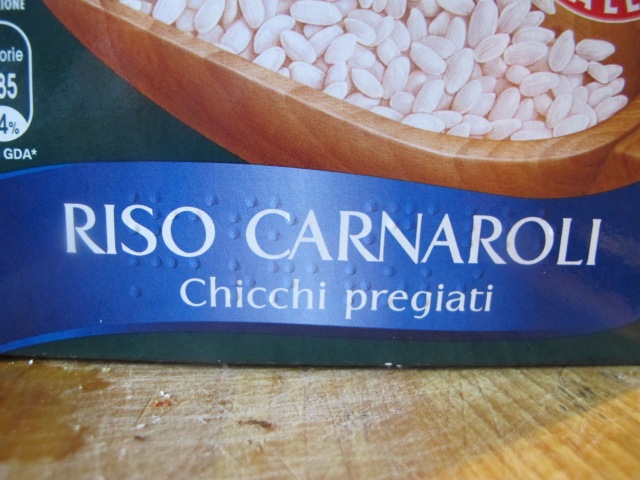 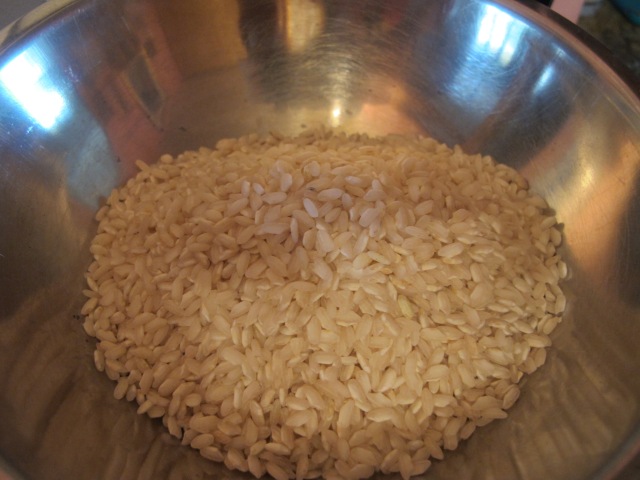 I measured out 350g of carnaroli rice (use arborio otherwise).

This was 150 g of minced/ground beef.

And here are the tiny teensy meatballs that I shaped out of just 150g of meat!

Your are supposed to coat the meatballs in flour and then shallow fry them (in olive oil).  I opted for the short cut of not bothering with the flour. 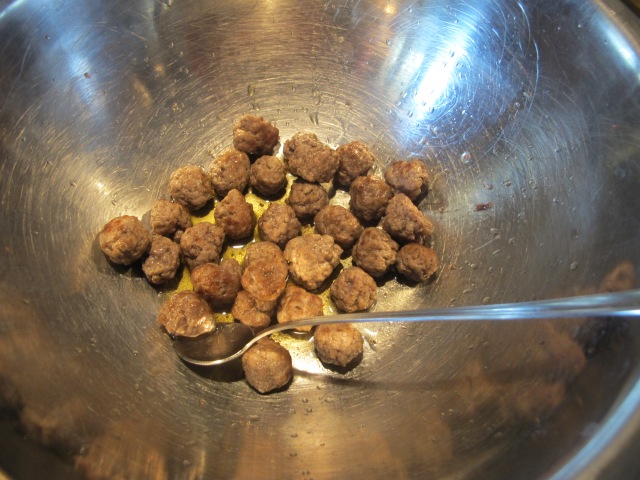 And here is what was left in the frying pan after they had been cooked.  I did not throw it away.  It was a kind of ‘gravy’.

And so I added some of this ‘gravy’ to the leftover pea and tomato sauce, to loosen it up a little, and add more flavour.   I turned on the heat and brought it up to a strong simmer. 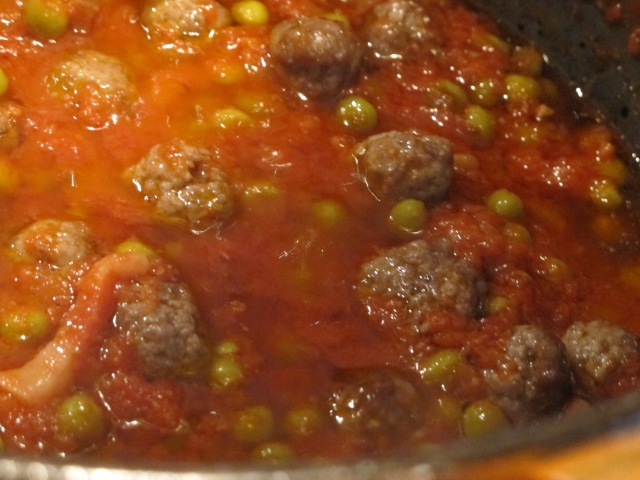 Here is a close up … I love the glowing patina of this sauce, its shiny sheen.

And now for another kind of fat: lard !  Time to cook the rice and instead of using olive oil or butter, this time I opted for good ol’ lard.

Once the rice has almost finished toasting in the pan, I added the chopped up porcini mushrooms. 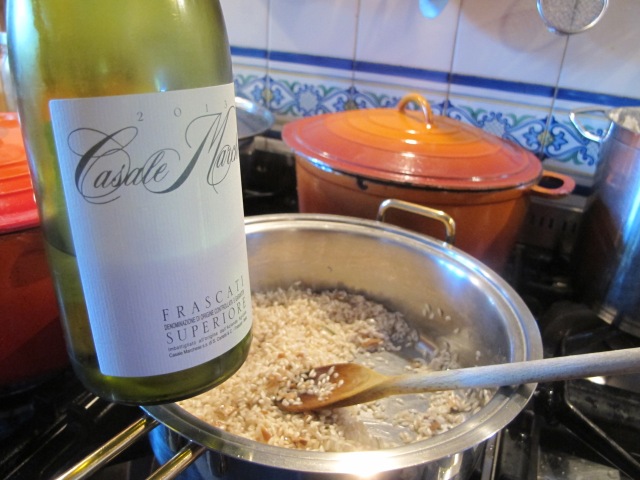 I then added some wine …

And cooked the risotto with  plain hot water, instead of chicken or beef or even vegetable stock.  I added salt, naturally.

When the rice was cooked but still very very very firm … okay … so ‘almost’ cooked is more like it, I turned the heat off – and ventured to add the grated pecorino cheese to it.  And gave it a good stir. 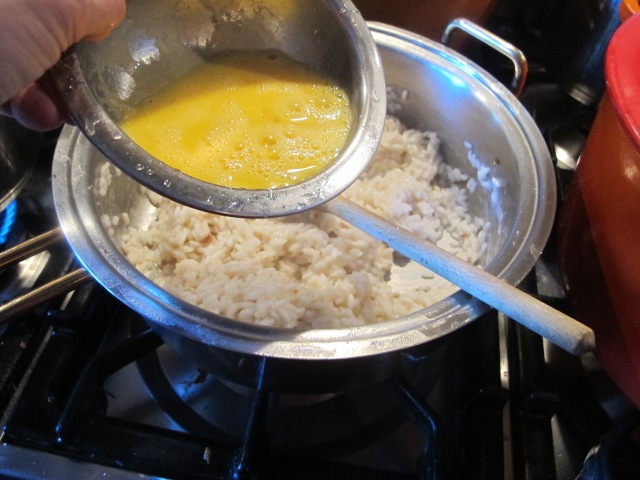 Well, I beat the eggs and added them too to the risotto.  But only after a few minutes, when the rice had had time to cool down a little (otherwise it might curdle). 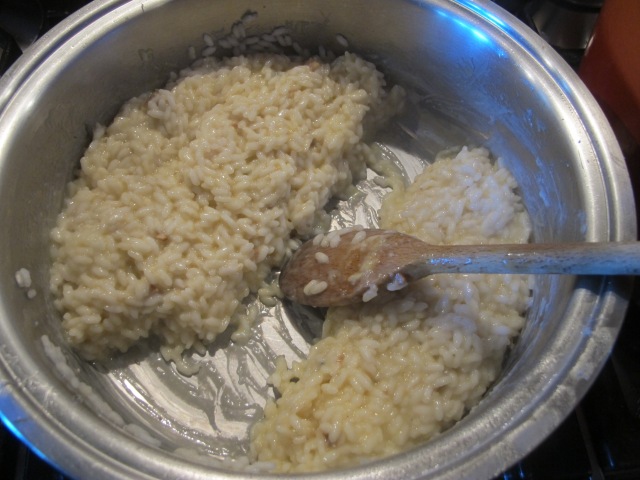 After mixing well and adding a bit more salt, I divided up the risotto into two parts: one considerably greater than the other.

TIME TO PUT EVERYTHING TOGETHER

I coated the oven pan with rice, making a casing as it were, with the rice lining the sides of the oven proof dish nearly all the way to the top.

Remember the hard boiled eggs?  Slice them.  Add one sliced egg and some chopped salami in one layer, in the middle of the dish. 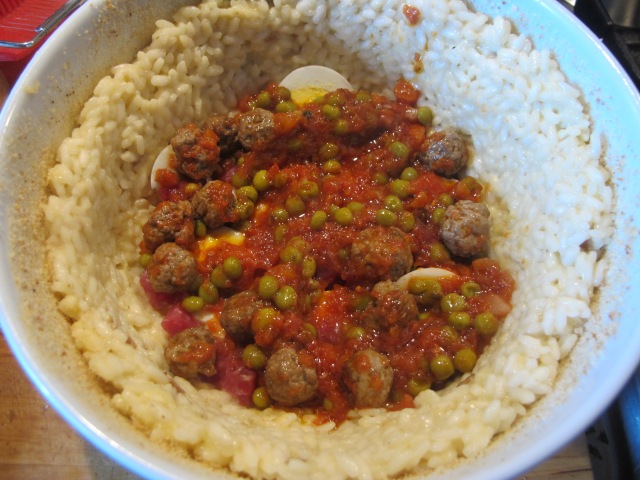 Smother the slices of egg and salami with a thick coating of egg and tomato sauce, and half the meatballs.

Now shower the lot with a good amount of freshly grated parmesan cheese. 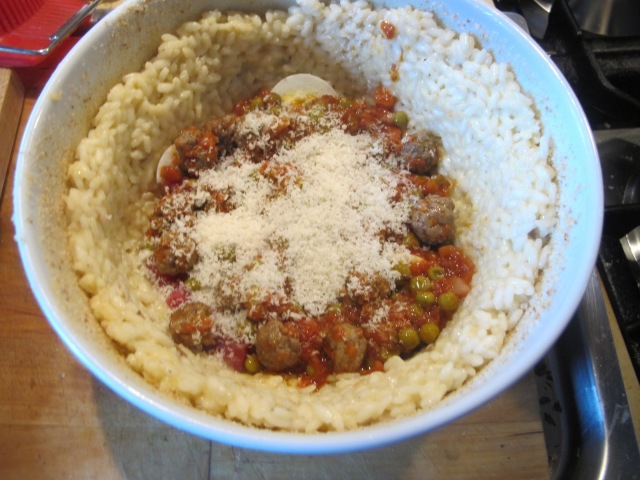 Repeat the procedure a second time …

But, with a twist this time.  This time we add chopped mozzarella on top of the slices of egg and salami.   Sprinkle a little salt, too, over the mozzarella.

The sauce and meatballs … 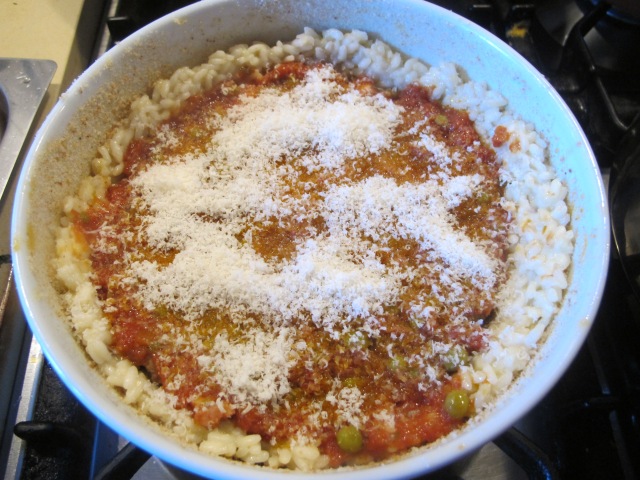 And last … a layer of risotto, to seal our sartù pudding.

Hide the rice under a layer of breadcrumbs. 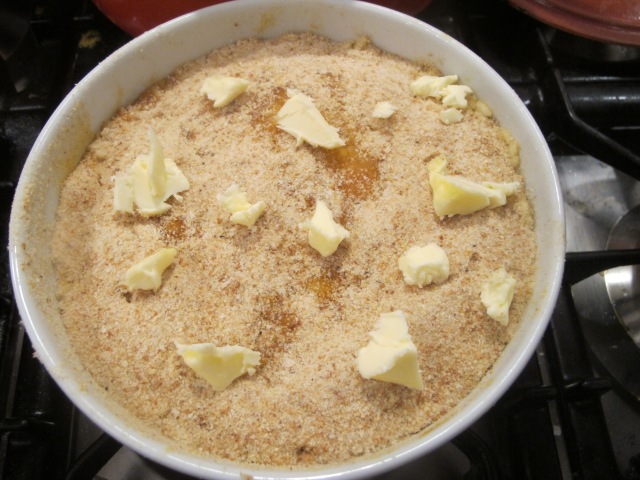 Dot the surface with specks of butter.

Bake the sartù in a preheated oven, at roughly 160°C, for about 45 minutes. 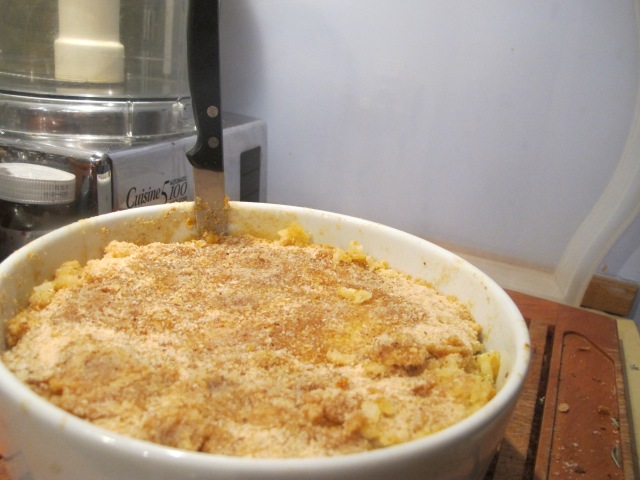 Remove from the oven and allow to cool for a few minutes.  Then insert a sharp knife and slide it around the perimeter of the sartù … to make sure none of it is sticking to the sides. Put a plate over the top and flip it over. 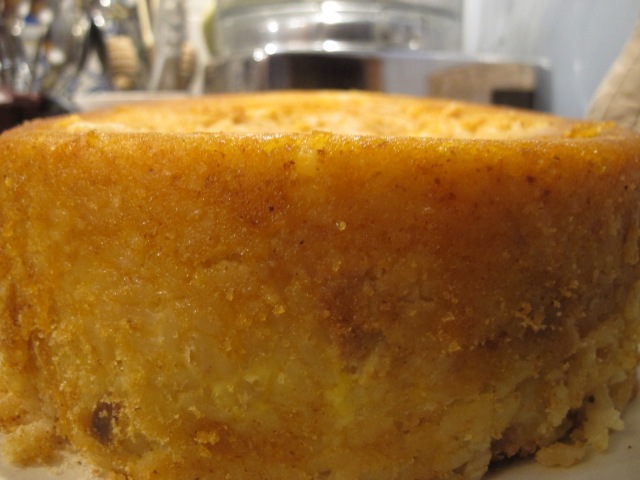 Aha ! here it is … all golden and juicy looking.

The top was not looking so good, however.  Sigh.  Never mind. 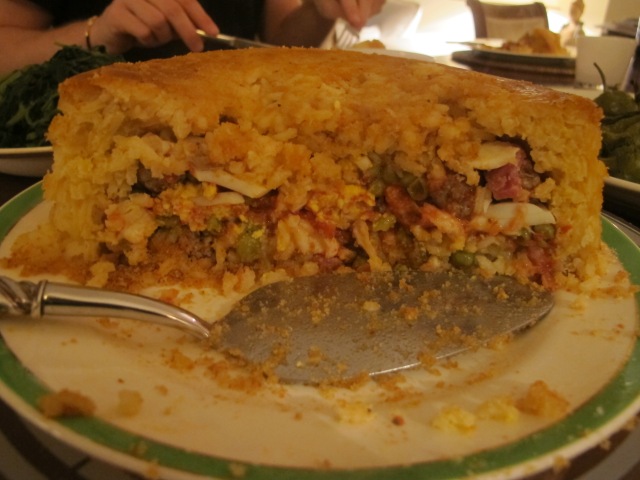 And then, it is sliced and put on people’s plates … and said people tuck in and chew and enjoy.  And somehow … it all seems worthwhile, worth all that effort and that long long list of ingredients.

Not that this is a ‘proper’ sartù … not as such.  And this is what I meant about making use of leftovers ‘backwards’ … i.e. using leftovers to create a ‘new’ dish.

I am quite sure that the (almost) full moon had something to do with this sudden craving of mine for sartù.  And so I shall end this post with an adage.  When you are after a boon, make sure there is a full moon.

5 Responses to A Craving for Sartù – Using Leftovers Backwards