The Trick of Chicken and the Brick

Posted on May 8, 2013 by myhomefoodthatsamore

The trouble with chicken is … that we no longer consider it ‘special’.  It is fairly cheap to buy, unless it has been raised properly and fed organic feed and what have you, and it is to be found in all the cuisines of the world, nothing exotic about it whatsoever.  Except for KFC (Kentucky Fried Chicken) which I haven’t had since the 1970s, no one would really consider it ‘exciting’ in any way.  Chicken is reliable, it’s always available, and even people on a diet or wanting to cut down on red meat will eat plenty of it.  In other words, unlike pasta, which is also eaten on a regular basis, the poor chicken rarely receives rave reviews (the one exception would of course be that extremely special chicken from France, ‘le poulet de Bresse’ which I have never seen on sale in Italy).

Last month, my friend L. organised a beautiful tea party — yes! a tea party! when is the last time you heard of anyone hosting a tea party?  It was fabulous — for her daughter who was visiting with her two very young children.  L bakes the wickedest chocolate cake you could ever imagine and so I naturally succumbed (what is a poor girl to do) and tucked into the cake and got carried away by the cheerful carrying-on of some of the little ones and the chatter of the older ones. 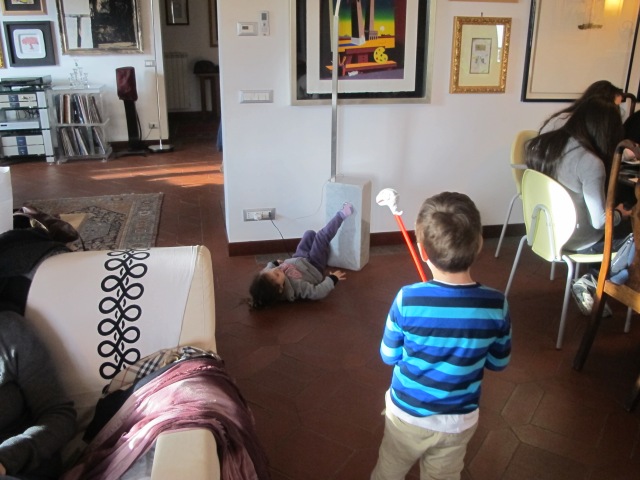 Time always flies on these occasions and by the time the afternoon was reaching its close, it was evening by now, and I realised to my dismay that I hadn’t even thought about what to make for supper and that I had to go and buy the food too.  “Chicken”, my friend suggested with a knowing nod.  She knows what it’s like, having raised a family of four.  And thus chicken it was to be.

Maybe it was the after effects of that delicious cake but I really did not want to serve up any ol’ chicken for my family that evening and so I resorted to the ‘trick’ of the brick.  I’ve written about this already (https://myhomefoodthatsamore.wordpress.com/2011/07/05/the-ultimate-must-have-kitchen-utensil-a-brick/) but the photos of the end result are not good and so I thought I’d repost, in the hope of inspiring you to try this one day.  It requires such little effort and rewards you with a wonderful crunch and savoury taste.  It does a lot to make chicken more exciting!

If you do not own a brick or two, and I expect most people do not, you can always make do with a heavy-bottomed pan filled with water. 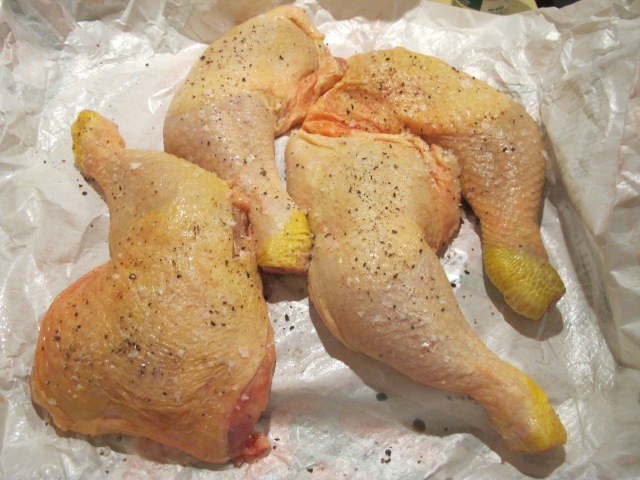 Here are the chicken thighs/legs … 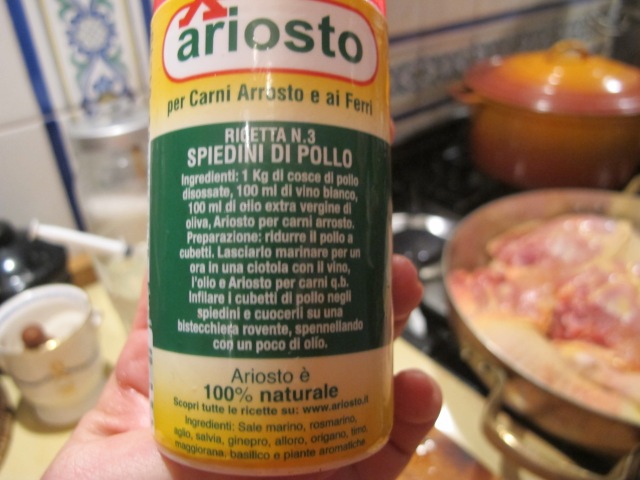 This is an Italian herb mix that is popularly used for roasts.  Though I am more partial to fresh herbs, I thought the Ariosto would work very well for this recipe. 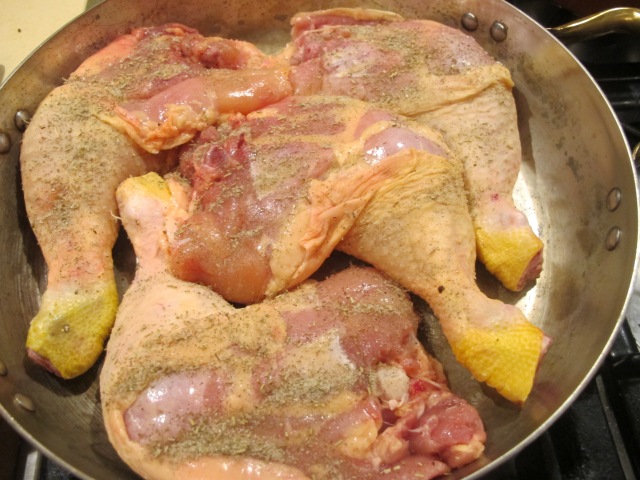 I laid the chicken skin down in a large frying  pan and turned the heat on high.  I sprinkled the Ariosto mixture on top. 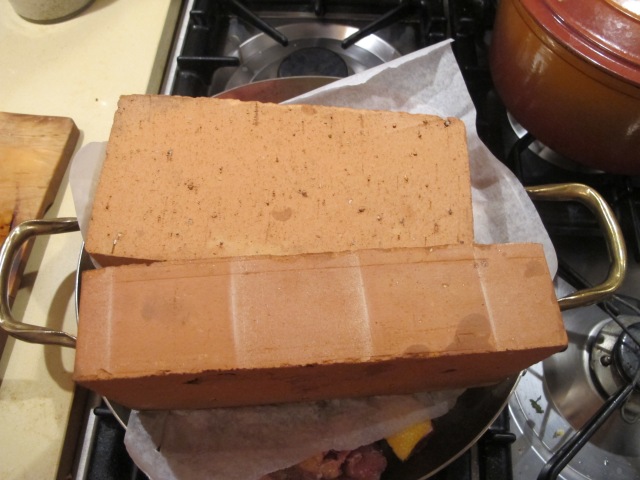 I then covered the chicken with parchment paper, and lay two bricks over the lot. 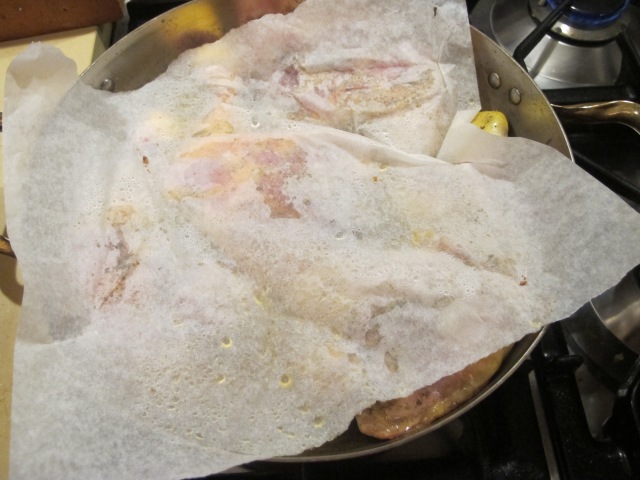 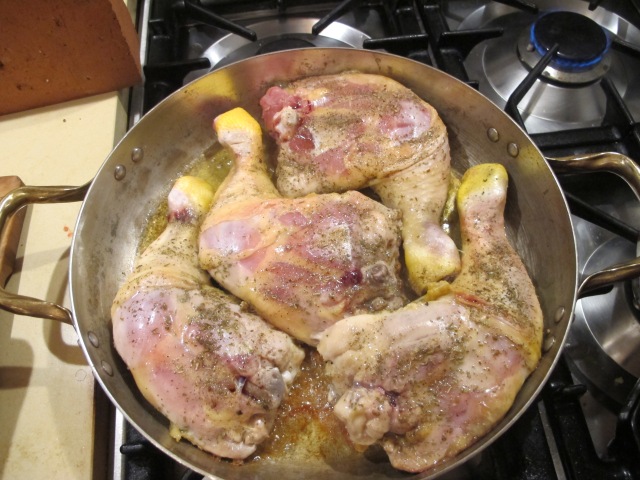 And this is what I found.  By the way, the aroma was already wonderful! 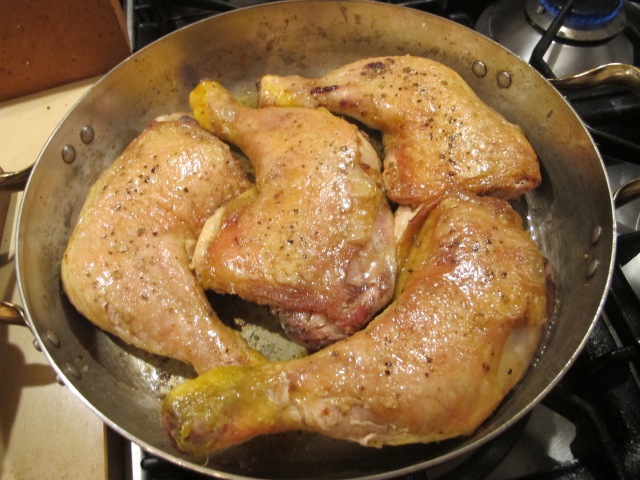 So I turned the chicken over and sprinkled some salt and pepper over the cooked sides. 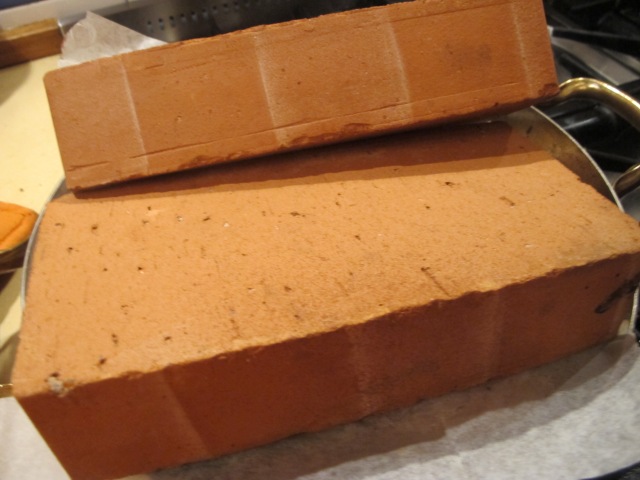 I then lay the parchment paper and the bricks as I did before.  You have to ‘press’ the bricks quite hard so that they flatten the chicken. 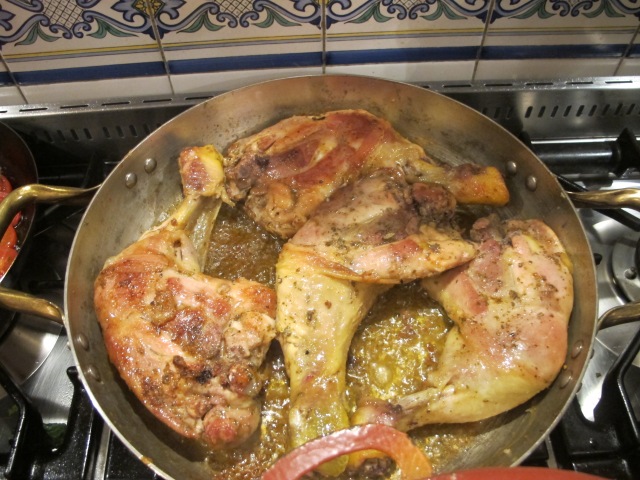 Twenty minutes later … and this is what it looked like.  Please note, that this time I didn’t add any olive oil whatsoever.  The chicken skin has plenty of fat of its own. 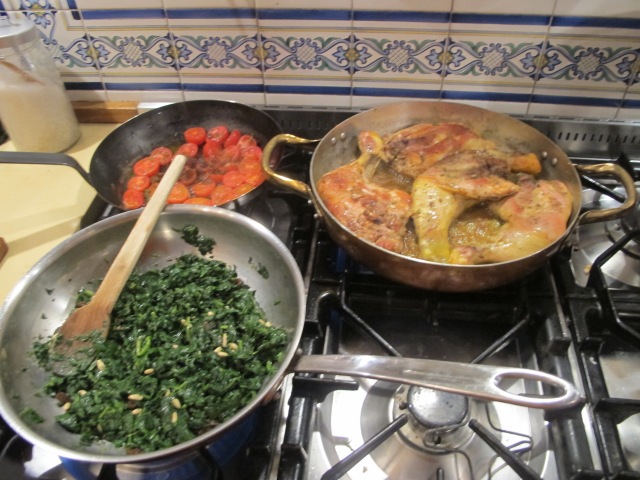 The chicken had browned beautifully! 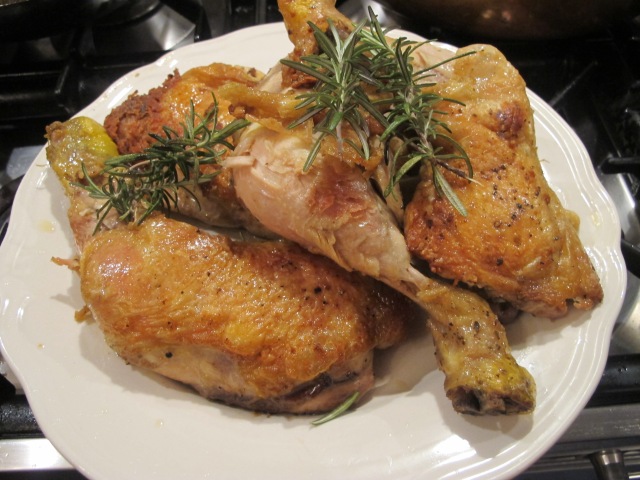 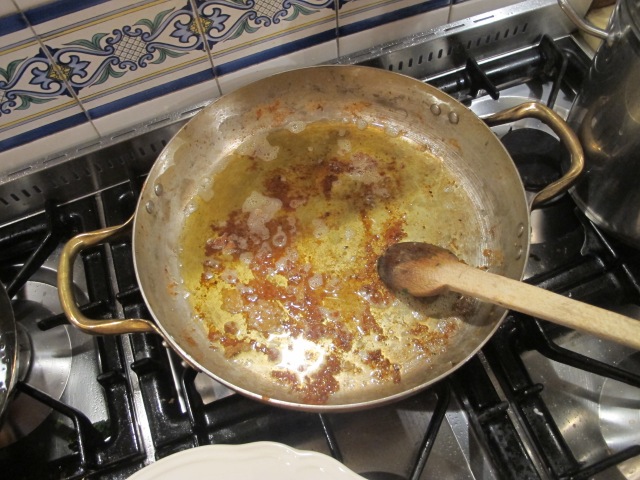 And this is all the fat that’s left over (I would have cooked potatoes in it if I had made potatoes that evening, but never mind!). 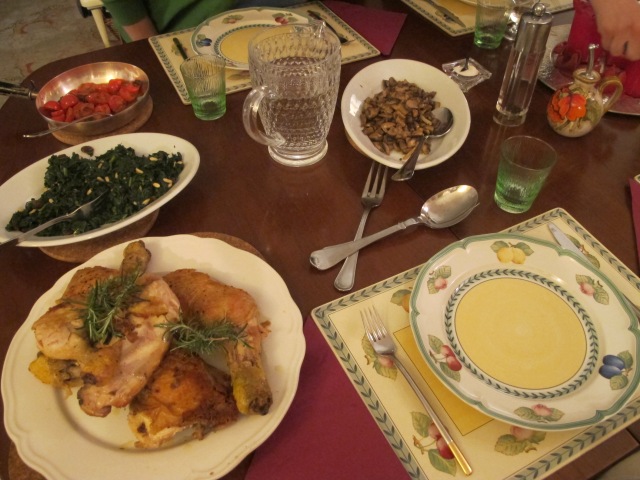 And here is a mid-week meal … spinach with raisins and pine kernels, pan-cooked tomatoes, and mushrooms as side dishes to accompany the ‘brick chicken’.

Where did the saying ‘you’re a brick’ come from?

I said to my daughter (15) Thanks you’re a brick’ meaning she’s good, kind, cool etc and she looked at me gone out. ok I know it’s from at least 2+ decades ago but where did it come from? or was it just the people I know that used it.

“brick of a man — A good, solid, substantial person that you can rely upon. The expression is said to have originated with King Lycurgus of Sparta, who was questioned about the absence of defensive walls around his city. ‘There are Sparta’s walls,’ he replied, pointing at his soldiers, ‘and every man is a brick.'” From the “Encyclopedia of Word and Phrase Origins” by Robert Hendrickson (Facts on File, New York, 1997).

11 Responses to The Trick of Chicken and the Brick