Insalata Russa: The Salad with a Mysterious Pedigree

Posted on February 1, 2013 by myhomefoodthatsamore

I almost got a headache reading around the origins for a mixture of veggies and mayonnaise that in Italy is known as “Insalata Russa” (i.e. Russian salad) and in Russia as “Salade Olivier”.  By all means, if you have time and are curious, take a look at this wikipedia piece (http://en.wikipedia.org/wiki/Olivier_salad) but I warn you … some of what is written there might be discredited by Italian researchers who claim, instead, that it was an invention from Piedmont’s House of Savoie, that it was also called a “genovese salad” at one time, and that the aristocratic Bona Sforza brought it with her to Poland upon her marriage to King Sigismund of Poland.  In Russia and Bulgaria, and in Romania, this dish contains meat – in Poland it is strictly, and in Italy usually, vegetarian with perhaps just a tiny addition of seafood to embellish the dish and make it more special.  It is usually served around Christmas and New Year and is therefore considered a festive food.  It is even enjoyed in Iran!

I never really liked insalata russa much until one day my friend from Elena from Romania made some for me and it was jolly delicious.  The main difference was that she had added some chicken.  I’d never heard of chicken going into an insalata russa before.  And I began to think that prawns, crab or tuna might be interesting to play around with too.  And that’s how I came to make my version of insalata russa, to which I have recently added both apple and beetroot (for colour).

Just as with cous cous, people either rave about it or discretely stay away from it.  I like to make it for dinner parties because it can be prepared the day before and because it looks so pretty.  My mother, bless her, who is known for not beating about the bush with her opinions, always scoffed at insalata russa.  But because she arrived starving hungry to a dinner I made a few weeks ago, she helped herself to some in desperation and found, to her surprise, that she really liked it.  Indeed she helped herself to it four times (she couldn’t bring herself to taste the seafood couscous, however; cous cous is simply beyond the pale so far as she’s concerned), that’s how much she like it!  Whatever …

Insalata russa falls under the category of ‘fiddly’: it requires home-made mayonnaise and not a little prepping.  But it’s not difficult to make and can be turned into a zen-like experience if you are under no time pressure.

The potatoes have to be boiled first … When ready, allow them to cool and then peel them and chop them into cubes.  Smallish cubes, bite-size …

Carrots need to be cooked too … and likewise need to be cut lengthwise and then crossways into cubes.

The beetroot(s) also needs to be cubed.

The mayonnaise needs to be made — lots of it! 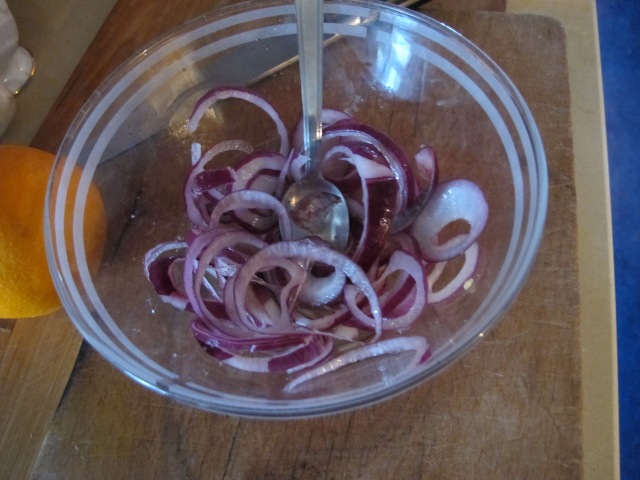 Slice some onion, red onion if you happen to have any, and let it steep for at least half an hour in some apple or wine vinegar to which a pinch of both sugar and salt has been added. Add more if you like your onions to have even less ‘bite’.

Then, after the onion has lost its bite … chop it as finely as you can.

Peel two apples and cube those too, and place them in a bowl with some lemon juice squeezed over them to prevent them from discolouring.

If you are going to use fresh peas, simmer them until tender.  Alternatively, use frozen peas. I happened to have peas in a can and so used those.

Use any crayfish you enjoy, to garnish the insalata russa.

N.B. I shall be writing a post shortly on the danger of tuna fish running to extinction soon … and so I have resolved not to buy tuna, whether fresh or processed, any more.  I did have some tuna in store, however, and so wanted to finish it off.  Hence the use of tuna in this recipe — next time, there won’t be any tuna.  I might use mackerel or salmon instead.

PUTTING THE INSALATA RUSSA TOGETHER

Avail yourself of a large bowl … or a large saucepan if you haven’t got a big enough bowl.  Place the cubed potates inside.  Sprinkle some salt and pepper over them.  Then add the chopped onion.

And here is the lovely, highly efficient and smiling Madalina who was giving me a hand and so preventing me from sliding down the slippery slope from zen to panic and hair-pulling.  The beautiful hands you see in the photos are hers …

Here is a chunk of tuna canned in oil being shred into smaller pieces.

When the tuna was all properly shred, we squeezed a good amount of lemon over it 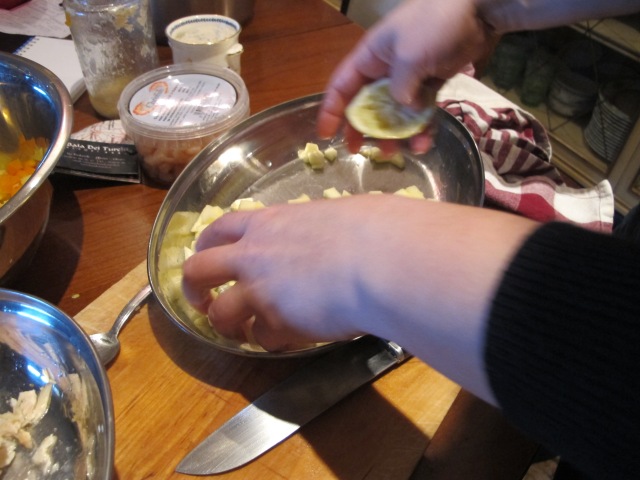 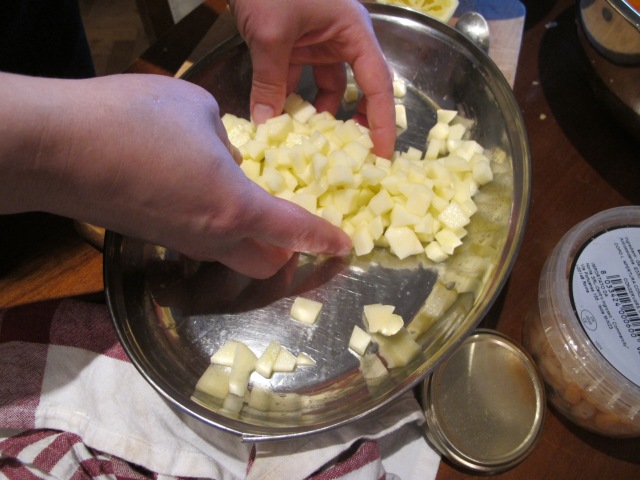 Here are the cubes of apple … they went into the big bowl too. 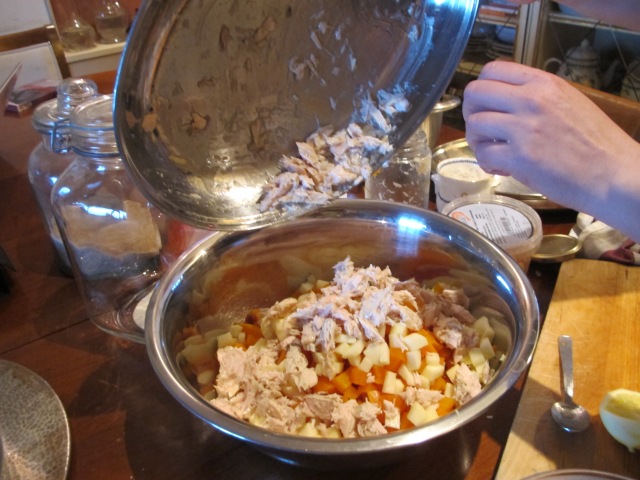 Then the carrots and the tuna …

And finally the peas.

As you can plainly see, we are talking about quite a large amount of cubed ingredients that needed to be gently … oh so gently …. combined. 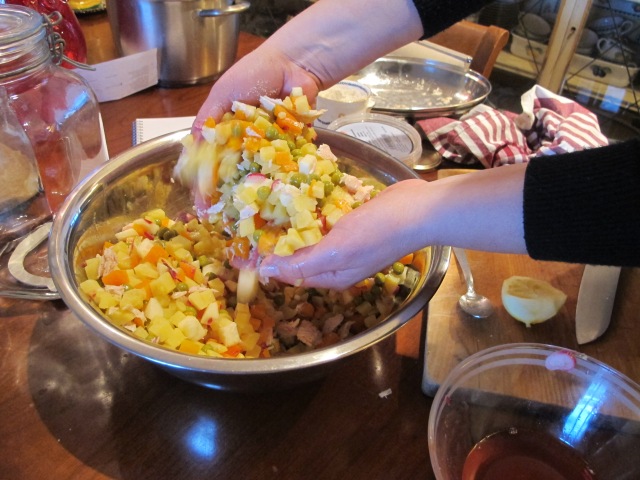 It takes a gentle touch, repeat, to get this right and Madalina was brilliant at it.

Now it was time to pour most of the mayonnaise onto the ingredients.  Set some mayo aside to top up the last layer of the recipe (“set some mayo aside” ! zounds! Eegad! it sounds rather like a tongue twister for someone with a lisp).

Bird’s eye view of Madalina using a wooden spoon to spread the mayonnaise evenly.  When I do it, I prefer to use my hands. 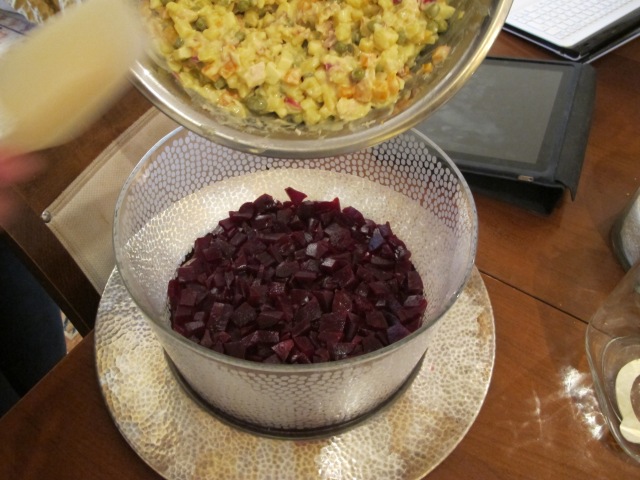 We placed the beetroot at the bottom of this serving bowl.  I drizzled a tiny amount of olive oil over it and sprinkled salt and pepper.

We then put our concotion of ingredients clad in mayonnaise on top of the beetroot, flattening the top with a spatula.

The rest of the mayonnaise got poured on top to sheath the insalata russa. 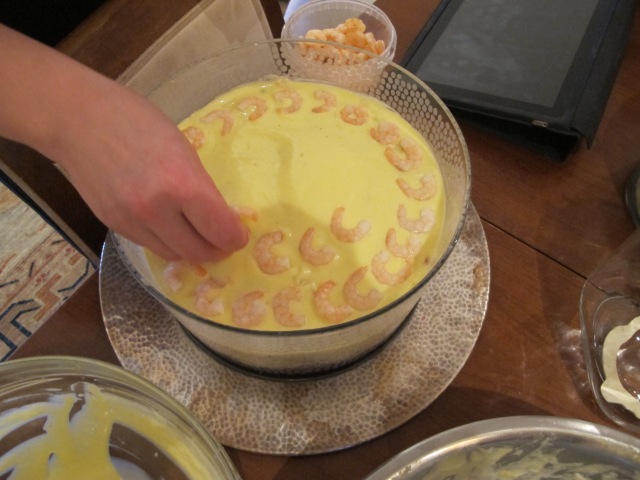 And pretty little prawns were put on the very top as garnish, together with some olives.  The insalata russa was then placed in the fridge, where it stayed for the next three hours before I removed it and let it get back to room temperature before serving it.

The only thing is … I never took a final picture! ouff! too busy getting everything else ready, sorry. 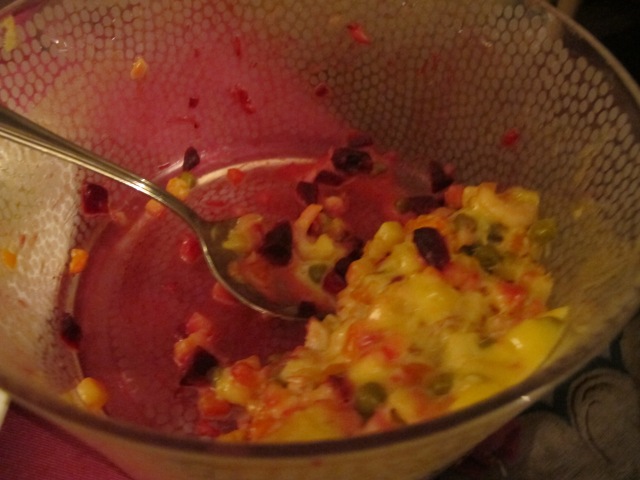 That’s what remained of it at the end of the dinner, however!  So … yes … some people most definitely DO like insalata russa!  Below are some older photos of insalata russa. 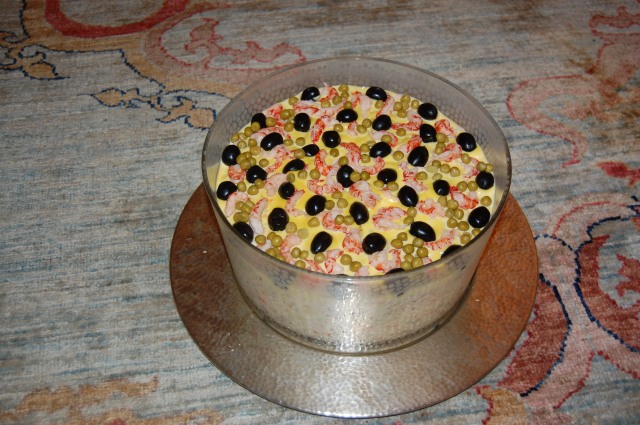 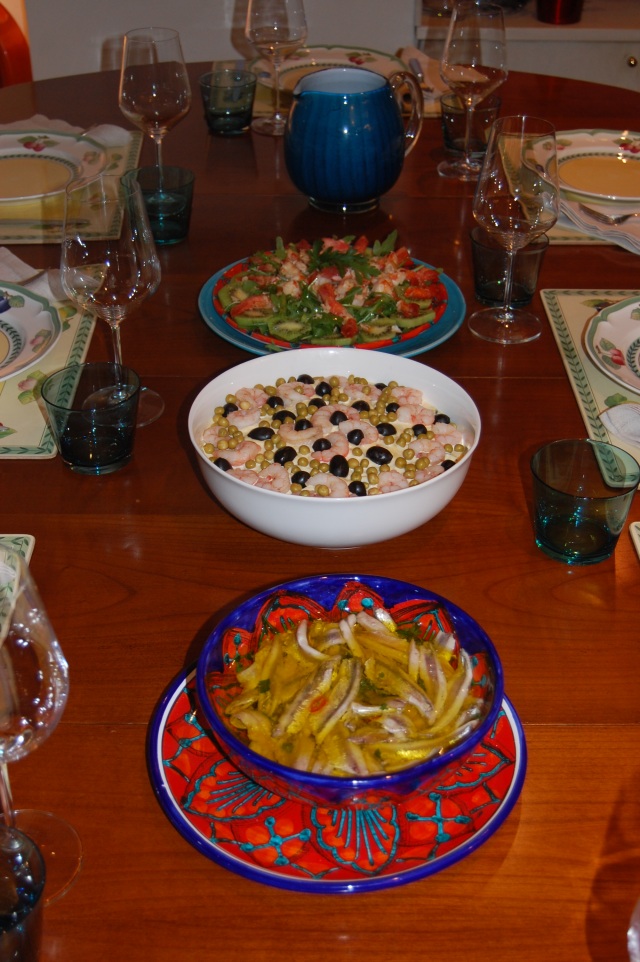 11 Responses to Insalata Russa: The Salad with a Mysterious Pedigree