Birthdays and The Little Things That Please Us

Posted on March 15, 2015 by myhomefoodthatsamore

It has taken me quite a long time to get used to the fact that a lot of people actively  desist from celebrating their birthday after their third decade.   For me, a birthday is not so much about being feted and made a fuss of (only once a year? are you kidding?  I wanted to be feted and fussed over a bit more often, thank you very much!) as it is about celebrating life … and sharing a bit of good will and warm, fuzzy feelings with people one cares about … the usual suspects: friends and family.  I can understand people wanting to go away on a trip for their birthday, or for keeping it low-key or thoroughly intimate with one’s lover or partner … that makes perfect sense.  But not celebrating at all seems like an awful waste of time … it’s not as if one’s unconscious doesn’t ‘know’ that another year has indeed gone by, the unconscious is relentless that way.  I wouldn’t go so far as to seek a moral to the story here but if there is one way to look mortality straight in the eye, surely it is by making the most of the ‘little things’ in our life, including a little bit of festivity around a birth date from long ago?

Recently, two friends of mine decided they wanted to share their birthday party and asked me to cook for them … and I was delighted to be asked!  Once we sorted out how many people were going to come (20 … gulp) and what sort of theme they preferred, I set to imagining the menu.  That’s the best part of organising a dinner for me … all the ideas, the imagination, the colours and textures that one can conjure, I even see facial expressions, smiles or eyes closed with pleasure, hear the tinkling of glasses, witness warm embraces, or shoulders moving with laughter, and when I know that it will end in dancing … that too.  Once the menu is finally crafted, the recipes consulted and the shopping list written … which is quite a little feat in and of itself … one would think that partial relief would set in.  Uh-uh. Instead that is when  butterflies start swarming in my tummy — am I alone in being like this?  However often a dish has been made succcessfully, however often friends and family have warmly complimented my meals, however easy a recipe is to repeat, the fact remains that things can go terribly wrong when it comes to cooking, and that a plan B must always be drawn up.  And cooking on behalf of friends just added to this kind of preoccupation … the success of their evening rested at least 50 percent on my being able to deliver a dining experience worthy of the occasion.

I decided to make fennel and prawn tarts … these can be baked in advance.

Here they are fresh out of the oven.  They then went into the freezer for safe keeping until the appropriate time. 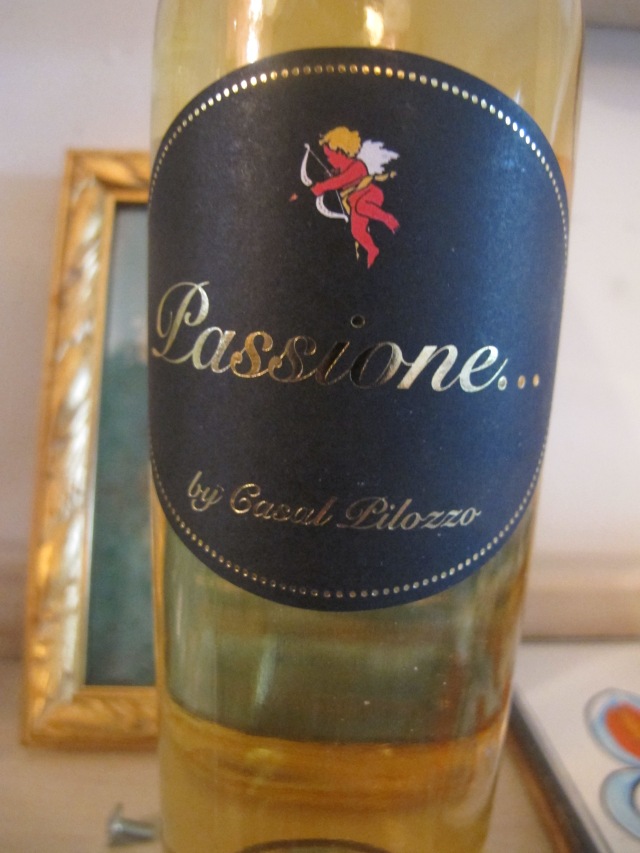 This is a dessert wine from Lazio’s Castelli Romani ….

I used it as part of the veal soufflé I prepared … and again directed to the freezer for the time being.

On the menu was boeuf bourgignon … This was one of two trays of meat that needed browning (4.5 kg of beef cubes).  I put on some Brazilian bossanova music to see me through this culinary phase. 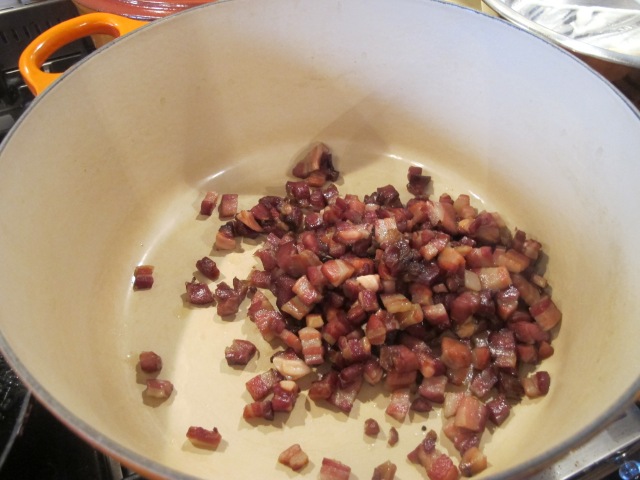 Some pancetta for the boeuf bourgignon.

A home-made bouquet garni for the boeuf bourgignon …

Just to give you an idea of the size of pot we are talking about to hold the beef.  It simmered away for hours. And then, on the following day, the onions and pearl onions had to be added and simmered a little more.

The taste was slightly disappointing.  So I transferred half of the beef stew into another casserole and ‘doctored’ it with funghi porcini to give it a deeper flavour.  I reunited the beef in the big pot again … and finally pronounced it good.

The day before I bought these lovelies … king prawns or mazzancolle as they are called here, from Sicily.  I made a bisque with their shells … which I subsequently used to cook some emperor rice in (see photo further on).  I deveined these mazzancolle, wrapped them tightly in clingfilm and consigned them to the depths of a cold fridge until the following day (for the fennel and prawn tarts).

And then it was D-Day … and the party was on !  Everyone hold their breath! 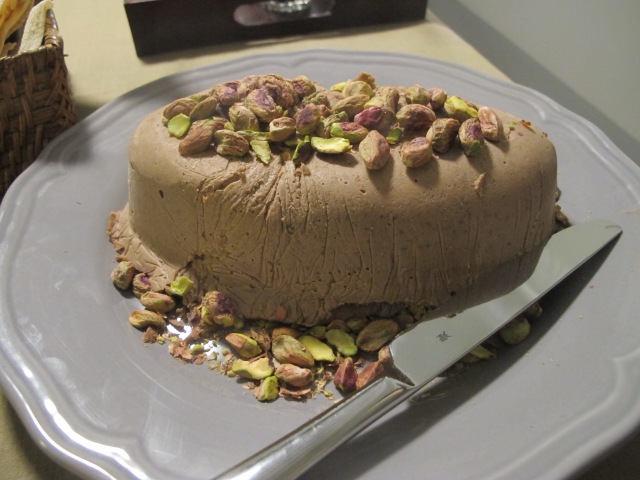 Veal paté with cream and pistachio … 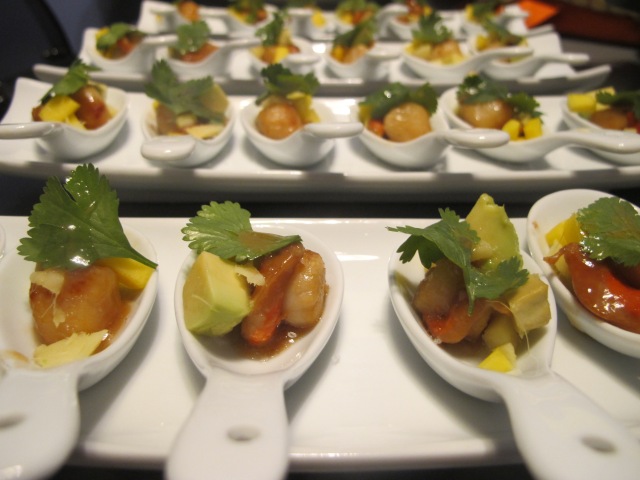 Scallops with avocado and mango … 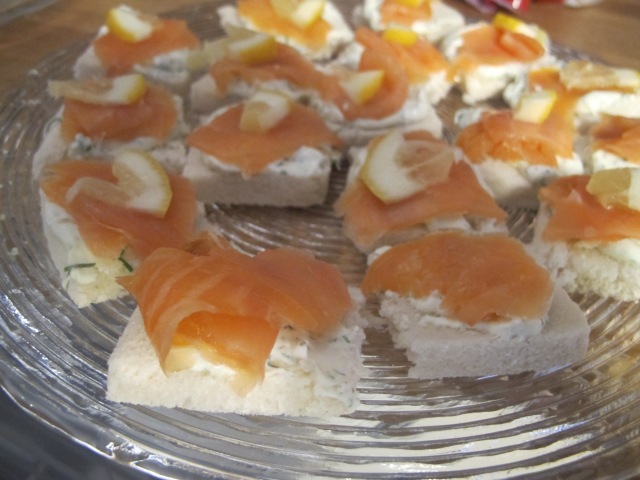 Gorgonzola nuggets with walnut and saffron-honey … 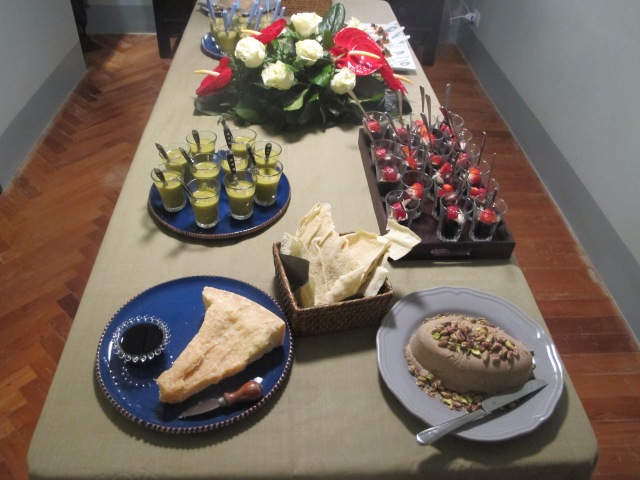 Camembert baked in phyllo pastry with a sprinkle of rosemary …

The fennel and prawn tart on the plate …

No photos of the tasting spoon with burrata, garlic-free pesto and tomato sauce nor the boeuf bourguignon and potatoes dauphinois (which my friends made).

One of the two birthday cakes.  This was a chocolate cake made by my friend Liz Macrì … 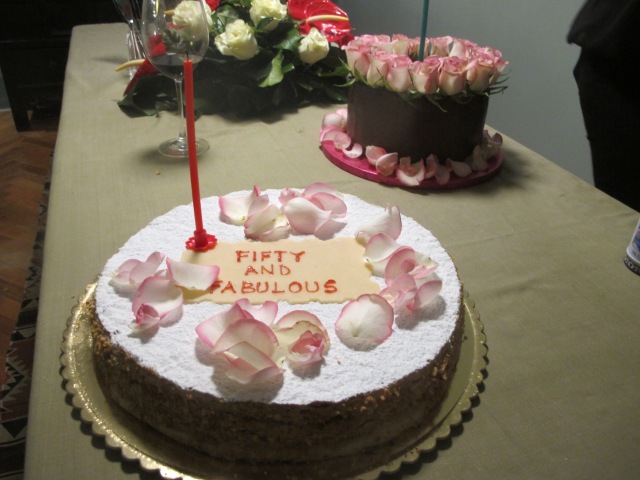 And here was the other birthday cake … saying it all !

Community celebration via food, wine and all beautiful things.
View all posts by myhomefoodthatsamore →
This entry was posted in Antipasti, Fish and seafood, Herbs and plants, Recipes from outside Italy and tagged Birthday parties, finger food, small plates. Bookmark the permalink.

11 Responses to Birthdays and The Little Things That Please Us