Montalbano Land and “Enzo a Mare”

Posted on August 2, 2014 by myhomefoodthatsamore

During the Autumn of 2002, I signed up for a course of cooking classes that were held on a Tuesday evening and happened to coincide with the TV showing of the popular Inspector Montalbano series.  I took a look just now and apparently it was already in its Fourth Edition by then –  but that was the first I had ever heard of the TV series and of course missed it all.  Shame on me for never having read Camilleri’s books on which the series was based.  I was grateful it was showing, however, because my husband and two children seemed to enjoy it a lot and didn’t mind my absence (I hasten to add that I always cooked dinner for them before going).  Years later, I got to view and enjoy some of these episodes myself on DVD … and now, somehow, they hold a special symbolic meaning for me, reminding me of a very happy, energetic and lighthearted phase in our nuclear family’s life.

More recently, just last month in fact, an extended-family holiday in Sicily saw us residing within driving distance of Punta Secca, in the province of Ragusa.  Our daughter who is a great fan of the Montalbano series said that there was no way she was going to give  ‘Marinella’ a miss.  Punta Secca is the real name for the fictional Marinella, the small town with Montalbano’s house and large terrace overlooking the sea.  The town with the big white lighthouse.  Our daughter got quite excited at the prospect of seeing them ‘in real life’.  I am apt to turn up my nose at touristy tours that rely on indulging the voyeur in us but this time I was game. And besides, I just love the sea.

And I also love me a long hot summer … it makes swimming all the more enjoyable.  This year the Italian summer has been more like monsoon downpour territory and unseasonably cold to boot.  What is the point of a wet, cold Italian summer?  We were fortunately spared the worst down in Sicily but it wasn’t exactly hot … the temperature on average being in the region of 28°C.  Picture my joy then as the day we chose to visit Punta Secca was gloriously sunny and even, almost, ‘hot’ (i.e. over 30°C) ! Clear blue skies! Bliss.

This is the bay where Montalbano likes to take a swim.

Nothing trendy about it.  Here I am, taking a shot veering to the right of the bay.

And here am I, looking to the left of the bay.  And there in the distance … is ‘the’ terrace that so entrances Inspector Montalbano and his viewers, sporting a white beach umbrella. If you enjoy a spot of visual play, you will notice that the beach umbrella looks a bit like a ‘moustache’, set against the grey building whose windows look like ‘eyes’ !

A closer shot of the terrace – or is it a balcony? never mind.  A man sitting there under the beach umbrella.  Wonder who he is …

Beyond the balcony and in the distance is the … white lighthouse.  ‘The’ lighthouse that appears at the programme’s signature trailer at the beginning of each episode:

I can’t explain it but the atmosphere was just so energising and restful at the same time.   There was direct synergy at work between the physical and the emotional.  The intensity of the blue of the sky and two-tones of the sea were mesmerising.  The air too tasted of ‘salt’ … iodine. On days such as these, you feel you want to live forever. 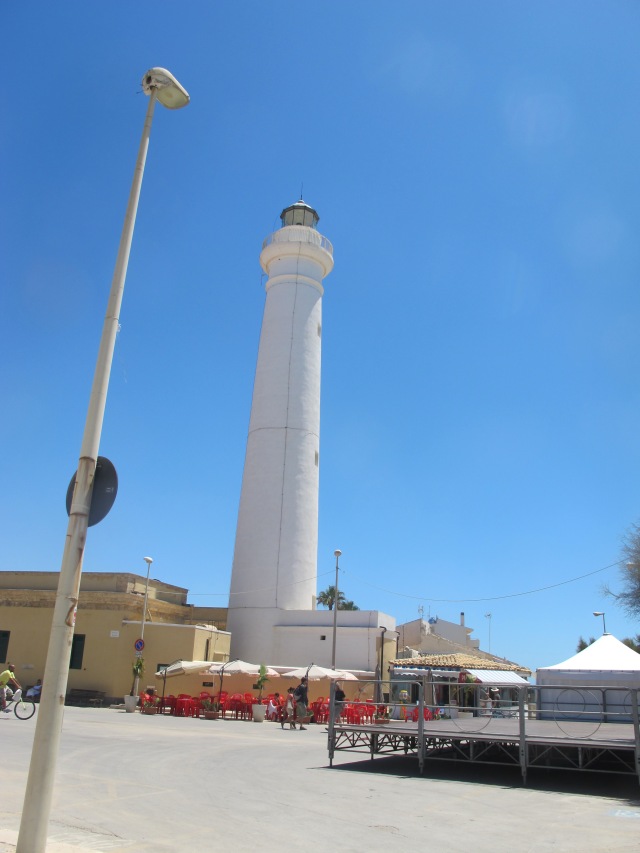 And then … just beyond the lighthouse ….

What should we espy in the distance but ‘the’ beach-hut restaurant where Montalbano likes to eat!

Is that a sight for sore eyes or what? 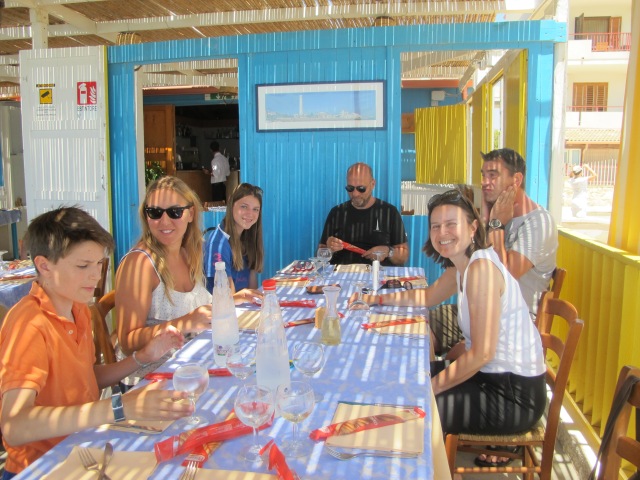 We were just all so relaxed and happy and looking forward to our lunch … Normally I snap photos left, right and centre of the food being served but this time, somehow, I was so ‘in the now’ that I didn’t !

Which is a shame because it was all delicious.  I ordered a plate of linguine with a swordfish ragout sauce.  I am not a great lover of swordfish but I thought I would be adventurous and try something new.  I am so glad I did … it was possibly the best dish I ate throughout our whole week’s stay in Sicily.

Everthing about Enzo a Mare is great … even the lamps made out of baskets!

And here is Nuniza, the chef.  I asked her for the recipe and if memory serves me well it goes something like this.

Pan fry a little garlic in some olive oil, to which you must also add: a small amount of lemon zest, salt-dried capers, olives and fresh mint leaves.  Add the swordfish, diced.  Cook for the briefest of time (1 minute say) and then splash a little balsamic vinegar in the mix. Turn up the heat and toss the pan.  Add tomato sauce and cook for about 10 minutes.  When serving the linguine sprinkle some Sicilian oregano around the rim of the dish.  Truly more-ish! 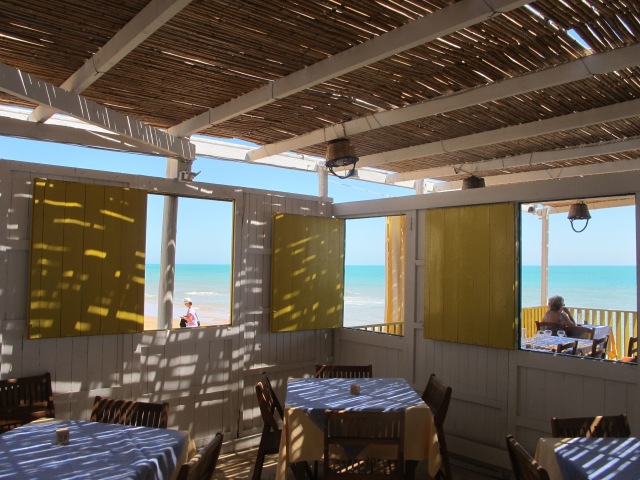 We said arrivederci to this corner of paradise and went to lie down on the sand … Some time later I ventured back to Montalbano’s bay and waded in as far as my thighs.  The water was freezing and I was too much of a wuss to manage to dive in, as I would have liked, and enjoy a swim à la Montalbano.  Ah well … next time.

On our way back to the car, later in the evening, I espied this lady reading decorously on her terrace within spitting distance of Montalbano’s house.  I was very much intrigued by her … and by her flowers on the terrace and the greenery climbing all over the facade of her house. 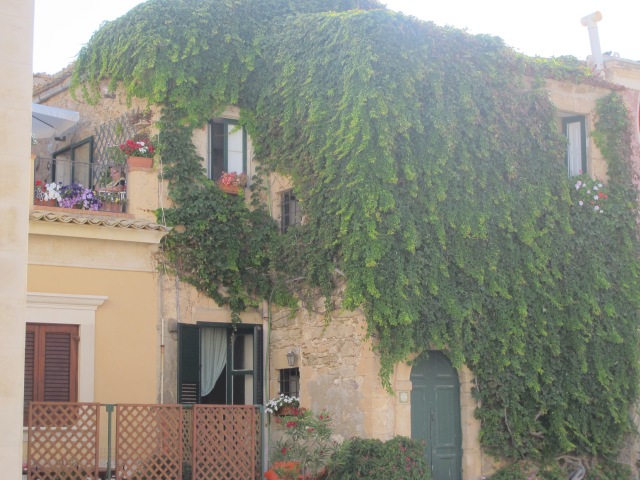 Another lady of ‘a certain age’ and beautifully dressed walked up to the front door and rang the bell.  The lady who was reading heard it and got up and peeped over the rails of the terrace.  Her face broke into a lovely smile as she recognised her friend.  “Ciao cara,” she said.  She beckoned for her to come up, to join her.  “Passa di qua,” she told her.  And her friend made her way into the house not by the front door, no, but by a large open French window (or whatever these things are called) on the ground floor.  I felt as if I were trespassing so I didn’t take any photos.  It was an amazing vignette of Sicilian life to ‘catch’ … so pleasant, so unhurried, so civilised.  I wonder who these lovely ladies are …

Punta Secca (Santa Croce Camerina) and Enzo a Mare.  Good company, glorious food, the sea … what more could I have asked for?

Community celebration via food, wine and all beautiful things.
View all posts by myhomefoodthatsamore →
This entry was posted in Fish and seafood, Places to eat, Primi (first courses - usually a pasta or risotto), Travel and Tales and tagged Enzo a Mare, Inspector Montalbano TV Series, Linguine with swordfish ragout, Punta Secca, SICILY. Bookmark the permalink.

14 Responses to Montalbano Land and “Enzo a Mare”