Loving the Leftovers: Pasta with Peas, Asparagus and Ricotta

Posted on May 3, 2014 by myhomefoodthatsamore

When leftovers are aplenty, and size does matter after all, the ensuing and logical procedure is to finish them off in their “what-you-see-is-what-you-get” glory.

When, on the other hand, one is taking stock of “bits”:  bits and pieces, a little bit of this, a smidgeon of that, a sliver of this, a morsel of that …well, then, that is when things get a little complicated.  Unless you have dogs in the house (dogs will gobble up anything), I suppose the brave thing to do is to just throw all these lilliputian remains away and be done with it, spit spot.  Then again, the ingrained avoidance of wastefulness that has been wired into our DNA for generations makes us recoil in horror: waste not, want not etc etc etc.  This is when the worlds of pasta, hash and omelette can and do come to the rescue.  Each in their own culinary context look at the remains of the day gleefully in the face and say, “Come on! let’s have some fun!”.

Or at least that’s what I told myself when I contemplated my palette of leftovers.  About two tablespoons of ricotta, roughly 1 cup of fresh peas, a handful of already cut guanciale and a clump of asparagus.  Mmmm.  There is always some parmesan in the fridge and an onion lurking about somewhere in the kitchen … hence … yes, pasta for lunch.  What follows is not exactly a recipe, more of a technique for dealing with your gastronomic conscience. 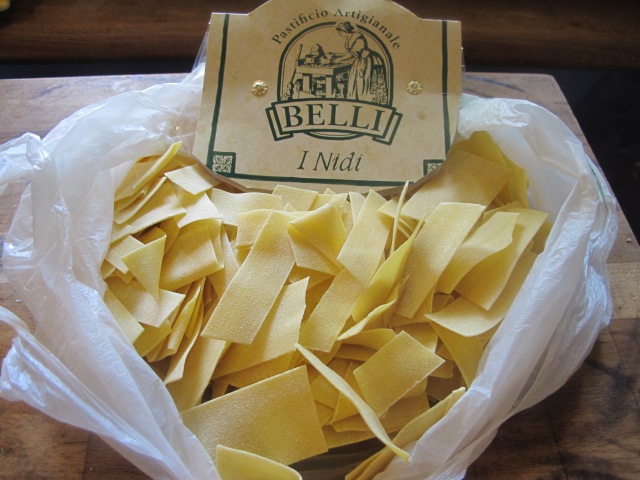 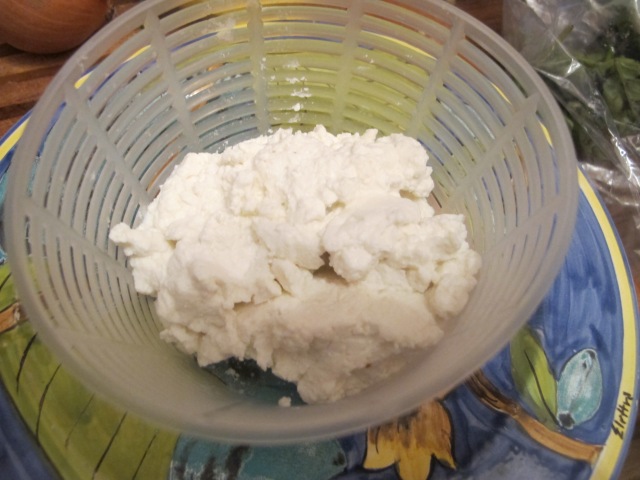 The measely amount of ricotta … 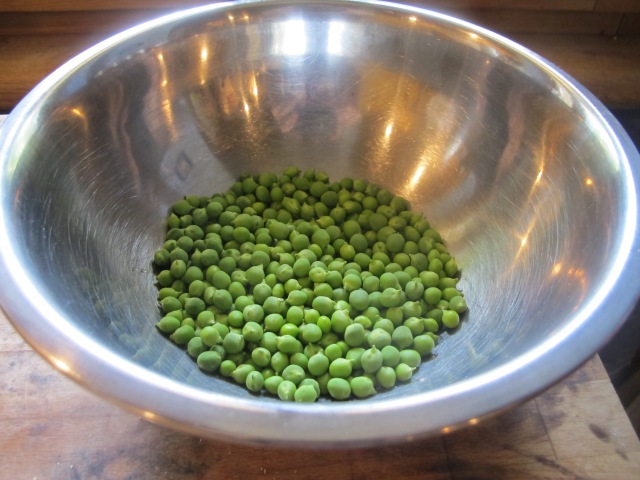 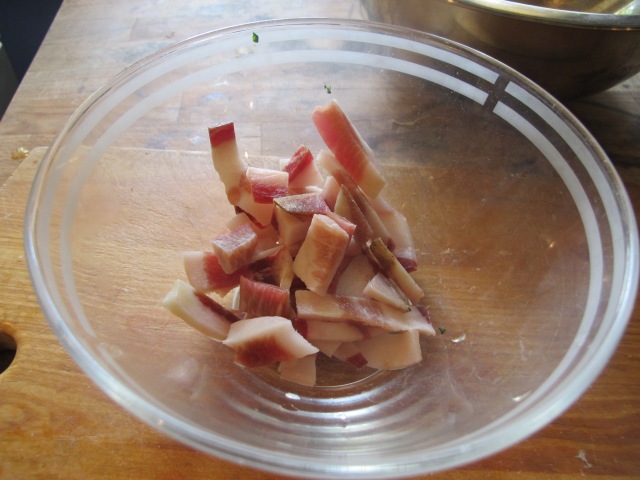 Time to get cracking. 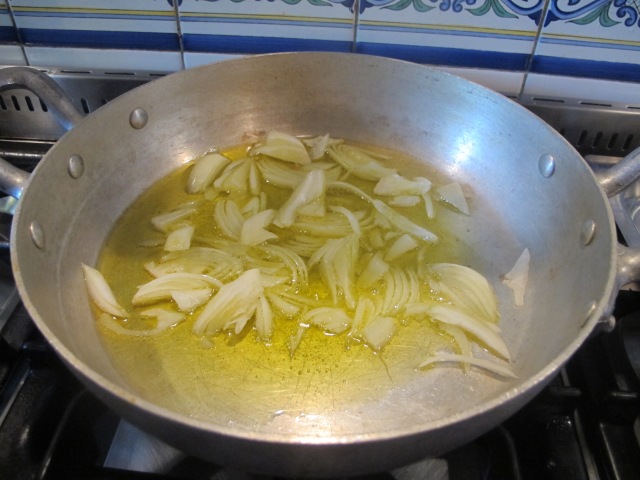 I began by roughly chopping an onion and sweating it in some olive oil. 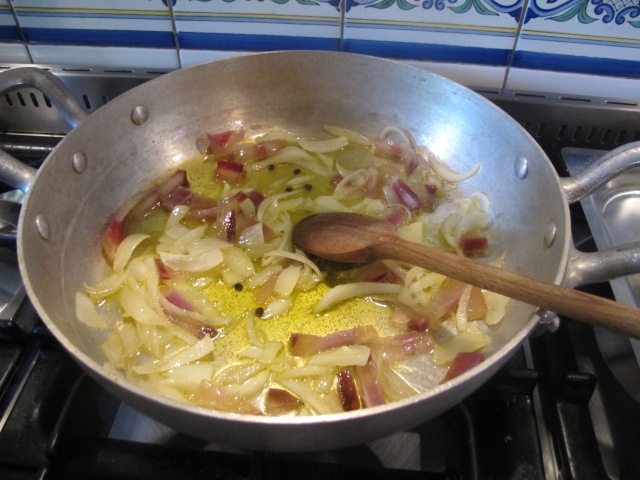 I added the guanciale and some peppercorns. 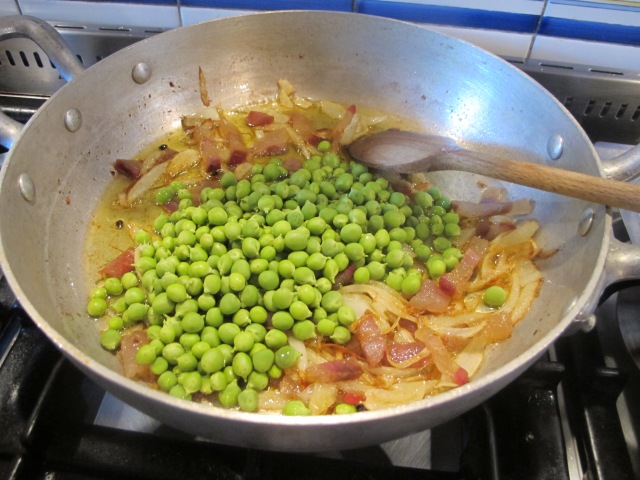 When the guanciale had rendered its fat, and the onion was nicely cooked, I added the peas, using a wooden spoon to combine all the ingredients nicely.  At this point I switched off the heat.

Meanwhile, while all this was going on, I had trimmed the asparagus and cooked it in simmering, salted water. 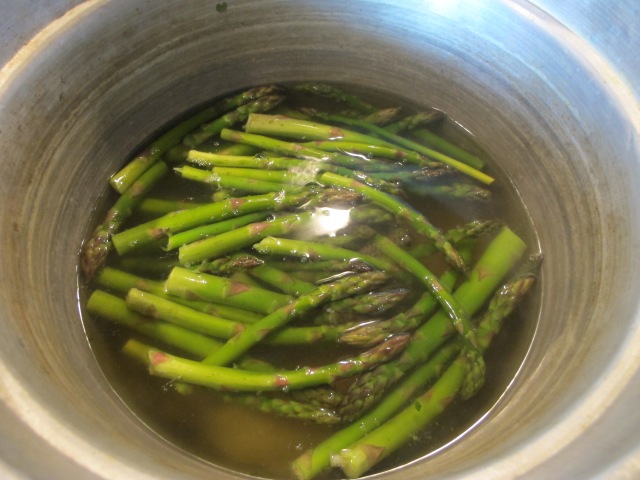 I removede the asparagus with a slotted spoon BUT kept its cooking water.  I would use this very same water to cook the pasta in later on. 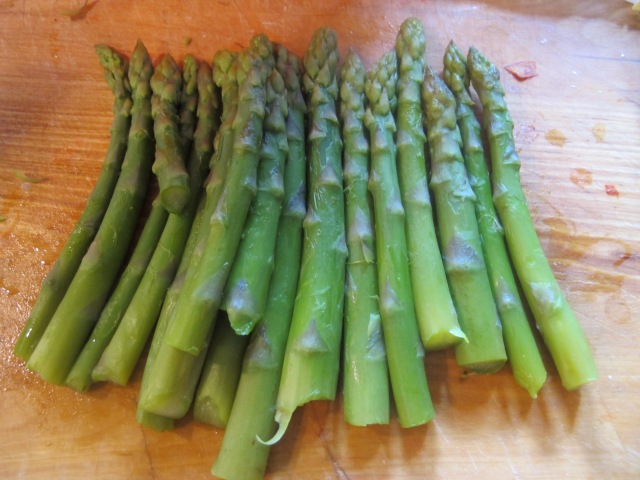 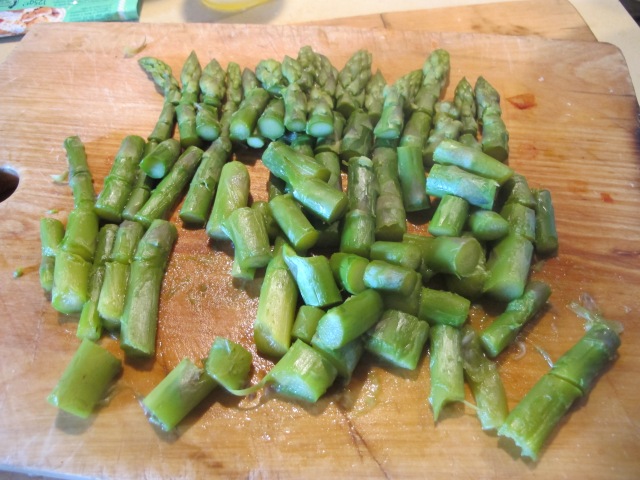 Once the asparagus was ready and chopped … I could carry on with the cooking. 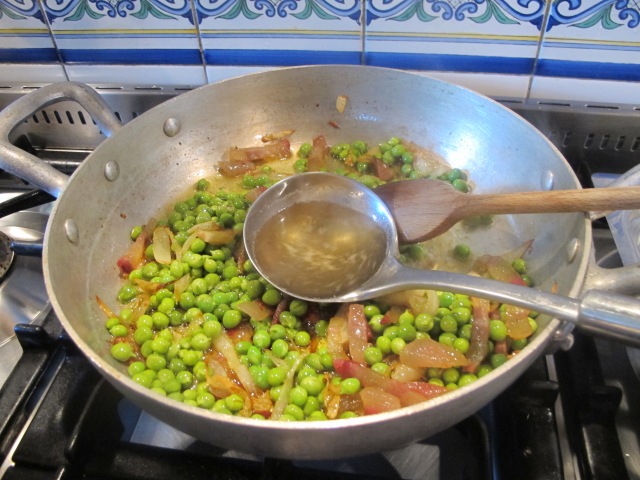 I turned the heat on under this large saucepan.  I added 1 ladle of the asparagus’s cooking water. 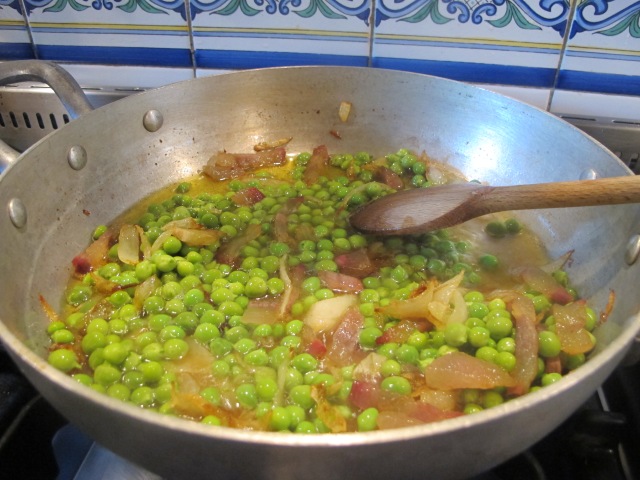 The asparagus water served to cook the fresh peas.  It is quite ‘soupy’ at first but don’t worry, the water soon gets absorbed.  So soon, in fact, that it was time to cook the pasta. 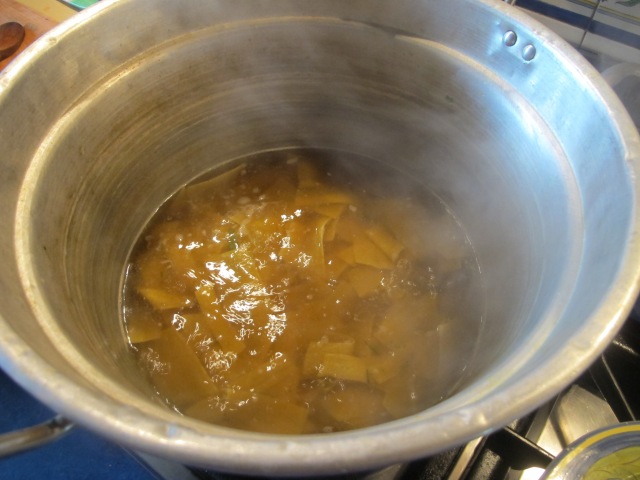 I had tasted the water before adding the pasta, and had to add more salt (some of it had been absorbed by the asparagus).  This kind of dried egg pasta does not take long to cook (about 4 minutes) so … 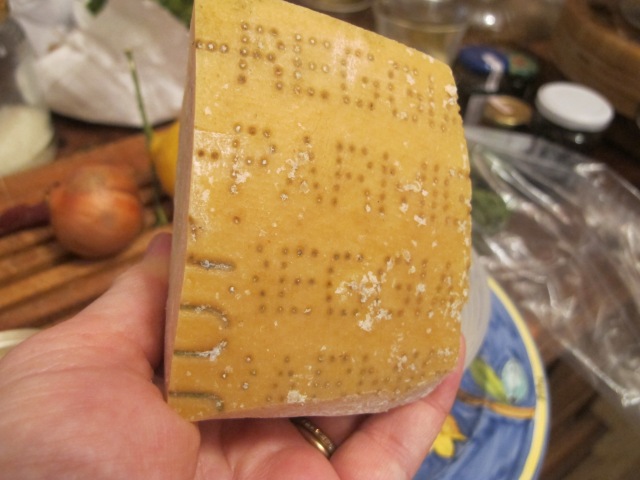 I asked my husband to grate the parmesan (I hate grating cheese, it’s one of my pet peeves) … 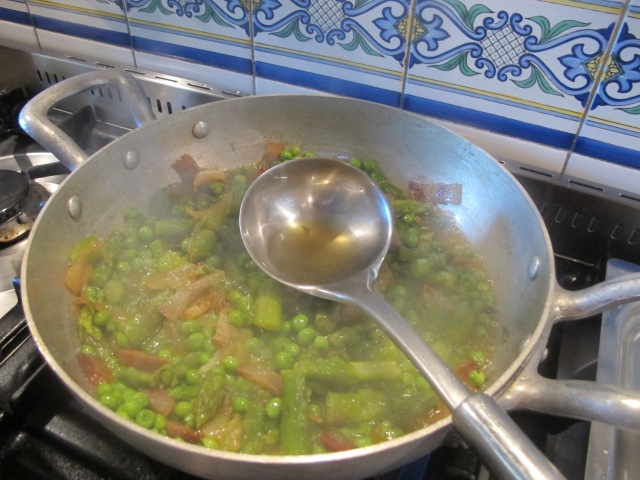 I checked on how my sauce was coming along and was mildly surprised to discover that I had to add a little bit more of the water that the asparagus had cooked in and which I had set aside.  The one truly important rule to be observed in ANY recipe is: taste, taste, taste. Keep tasting until you get it right.  A little bit of salt might be needed.  A twist of white pepper in this case.  Even a pinch of sugar (for the fresh peas). 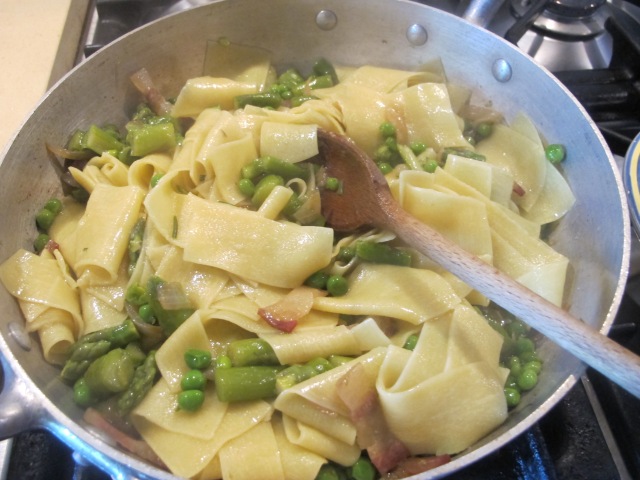 I drained the pasta straight into the saucepan …. and used the wooden spoon to mix the medley of ingredients. 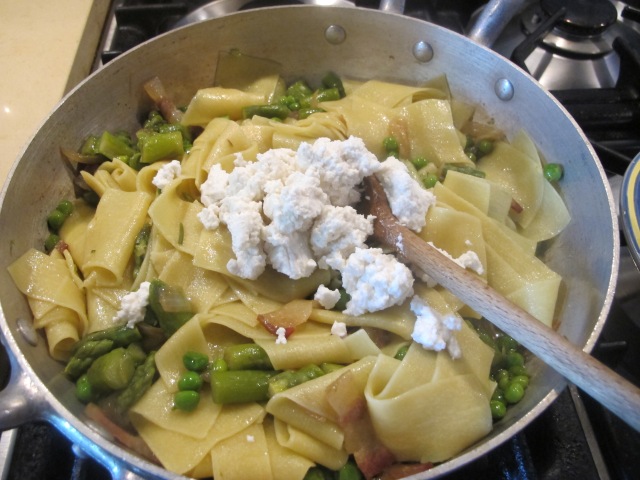 I then added the ricotta … and more mixing and combining with the wooden spoon. 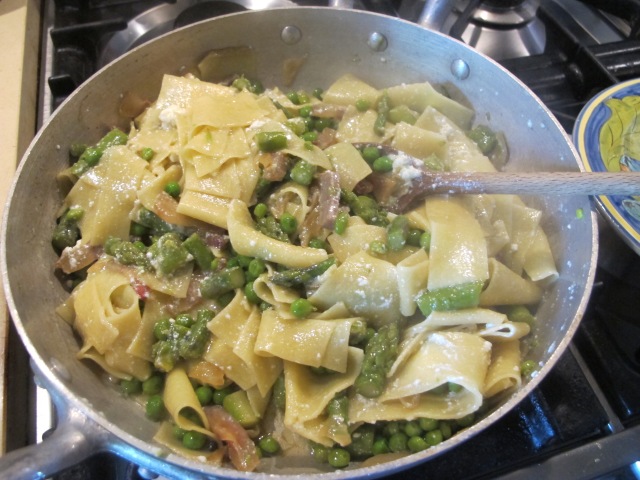 Time to switch the heat off. 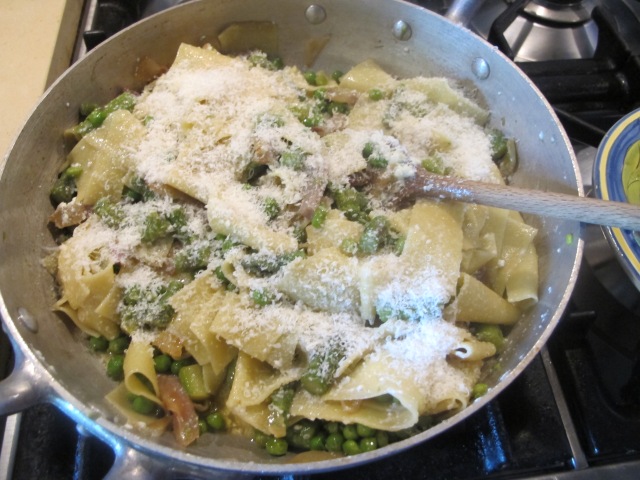 Add a shower of freshly grated parmesan cheese (pecorino would have been another good option). 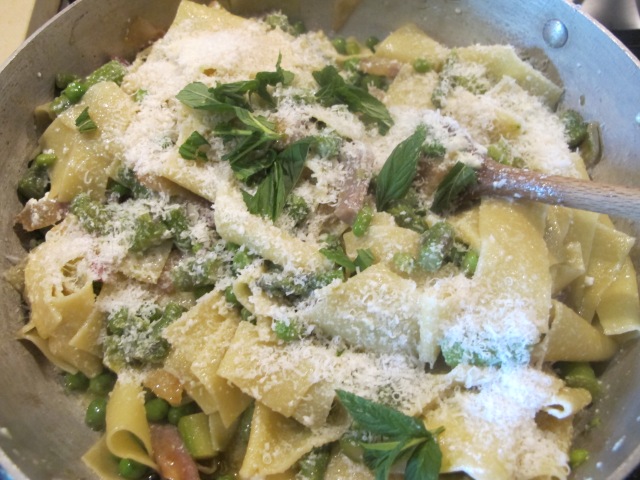 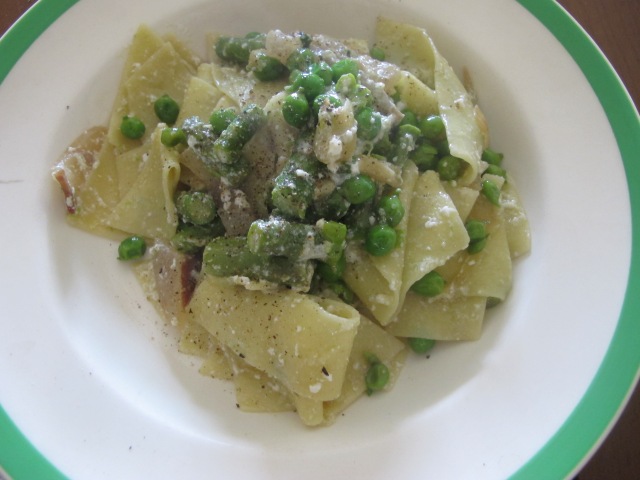 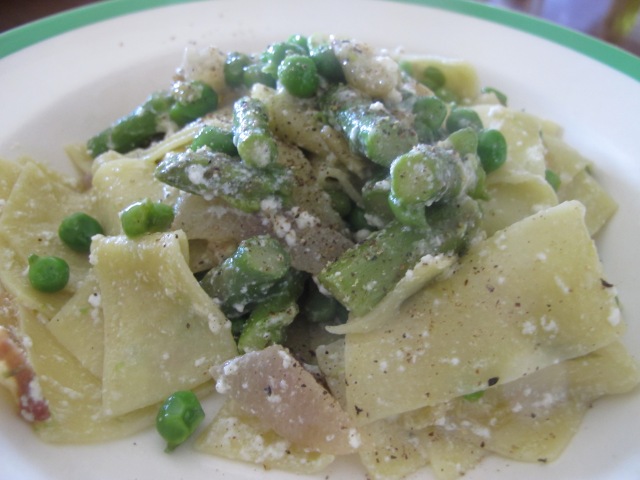 A delightful leftover pasta recipe to ring in Spring.  Not to mention a good conscience !

14 Responses to Loving the Leftovers: Pasta with Peas, Asparagus and Ricotta