Posted on January 30, 2014 by myhomefoodthatsamore

This is a fourth post that I am writing on His Excellency The Oxtail Stew (coda di bue alla vaccinara) … which tells me two things.  One … that I like it and two, that I like to play around with variations.

Today’s variation is much closer to my mother in law’s recipe – which eschews chocolate, raisins and pine kernels and which concentrates, instead, on the fragrance and kick of His Majest the Celery.  Celery stalk and celery leaves, the full monty.

I happened to eat a delicious coda at a friend’s house not so long ago and was surprised to learn that his variation contained a touch of cinnamon (he also added a couple of cloves)!  He being a chef, I thought if was his touch of brilliance but a little research revealed that cinnamon is an integral part of oxtail stew in the town of Viterbo, in northern Lazio.  I sedulously write all these methodological details because people can get very ‘hands-on-hips’ about this recipe.  “THIS is the way it’s done!”  “No! THIS is the proper way to cook coda in Roma”  “Ha! my great-grandomother’s cousin’s next door neighbour used to make it THIS way”.  And on it goes.

I gave the matter some thought and decided that, aside from ingredients that enhance taste, the oxtail is really all about technique.  It’s a tough ol’ meat and takes forever to cook.  My mother-in-law, a woman of practical bent, wouldn’t dream of making a coda without a pressure cooker. It’s a bit like cooking stock too … it exudes plenty of scum that needs to be removed one it starts simmering.  Bearing all this in mind, I think I can contribute a few useful tips, whichever variation you have in mind.

a) this kind of meat needs to be thoroughly rinsed before use – so either soak it in a tub of water for about 4 hours or leave it overnight.

b) Before even dreaming of adding any taste, it’s best to simmer the meat.  That way the scum is got rid of.  Simmer for about 40 minutes – then drain and rinse under running water if necessary, and pat dry.  Now you can begin adding taste and cooking the coda.

c) Count on having to cook the meat for about 4 hours (including the 40 minutes of simmering in boiling water), maybe even a little longer.  Slow cooking it is the best way, no need to resort to a high flame.

Following on from what I wrote above, the first thing to do is make a celery stock. 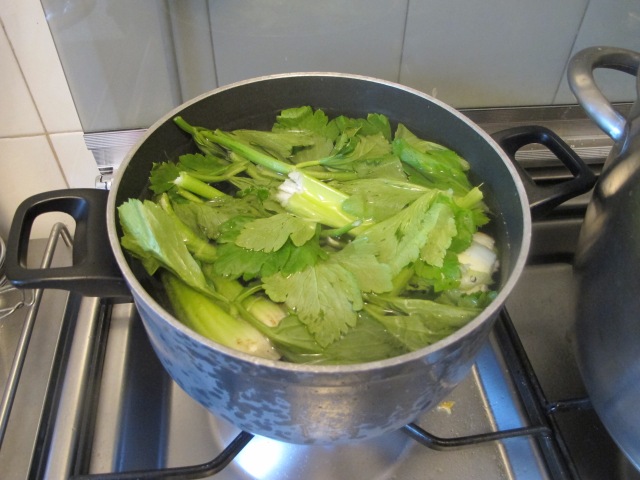 This stock will be added to the stew by and by, as it simmers.  All you have to do is put loads of celery (both stalk and leaves) in a saucepan and bring it to the boil, let it simmer for about half an hour or so.  Done.  Set aside and keep close to the other large pot, the one in which you are going to cook the coda.

Them get hold of, say, 6 stalks of celery and remove the stringy bits with a potato peeler.

Set the leaves aside for later.

The taste enhancers: carrot, onion, pork jowl or pancetta and a bayleaf

What you see here are two pieces of coda being browned in a little olive oil.  Remember: these pieces were previously simmered in boiling water for about 40 minutes.

Brown the pieces of coda in batches, and pile them up as they cook in a large stockpot or saucepan.  Sprinkle plenty of salt over them before they go in.

When all the pieces of oxail are browned, add the plum tomatoes – enough to well and truly cover them.  Now you can turn the heat on and the slow cooking begins.

Chop the onion and carrot … I ended up using only 1 of each.

Cut the pork jowl and cook it in a pan so that it renders its fat, i.e. over a low heat.

Stary by adding the bayleaf. 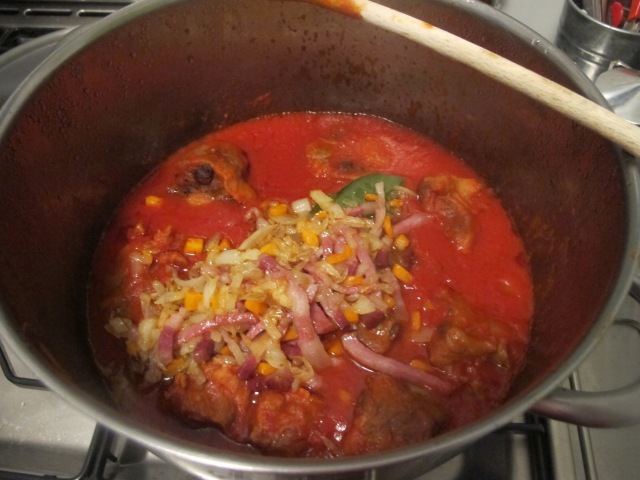 Then add the other taste enhancers: the carrot, the onion and the pork jowl.  Stir and simmer for about two hours.

At the end of two hours, add some cinnamon.  I was very cautious and added only the amount you see in the palm of my hand.  Towards the very end of the cooking time, however, I added a pinch more after my tasting it had warranted such a recourse.  It gave the stew a really nice depth, without in any way being ‘forceful’. In other words, you couldn’t even taste the cinnamon as such.

Cook for another hour, and add some of the celery stock  whenever the stew looks like it is thickening too much. 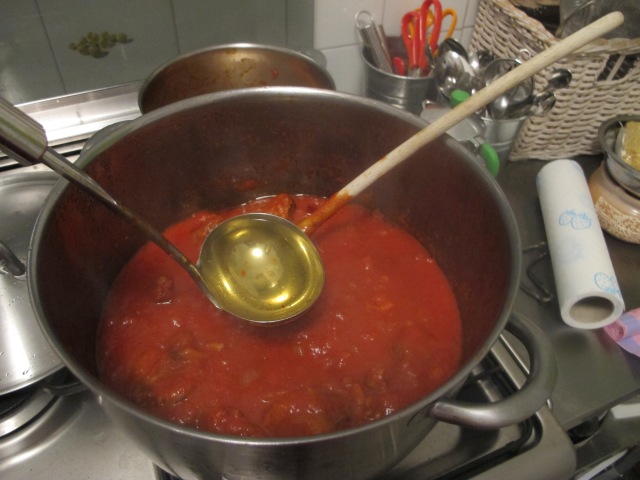 There is a delicate balance to be maintained — this is a stew, not a thick or dense soup.  But because it has to simmer for so long, it will definitely require regular additions of the celery stock.

Remember our celery stalks? Chop them up now … 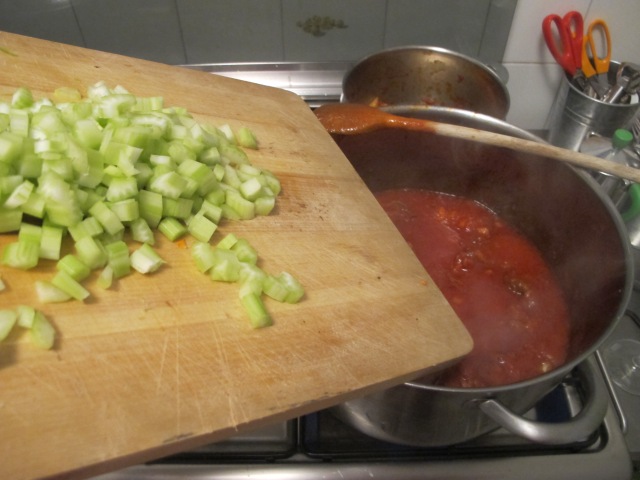 Add them to the stew …

Remember the celery leaves? Time to chop them now …

Add them to the mix and simmer for a further 5-10 minutes.  They are not like parsely, they take some time to ‘cook’.

And here it is, ready to be served.  It took a total of just over 4 hours to get the meat to be tender and inviting enough to wolf down.

Coda di bue alla vaccinara requires bread to mop it up.  No bread, no coda – seriously.  You start off doing the polite thing, using a knife and fork … but, however tender the meat, you reach the point where you just have to use your fingers and gnaw away at the knuckle.  Don’t bother otherwise.  You mop the sauce up with the chunks of bread, wipe the plate clean … and then dash off to the loo to wash your hands.   I always know when people are happy because they sigh (Aaaaah) and nod their heads slightly.