Foraging inside the Fridge and a Hot Dip – Bagna Caoda

Posted on November 11, 2013 by myhomefoodthatsamore

“When it comes to stocking the refrigerator,” I should like to say suavely with knowledge born of long experience, “my general goal is to stick to three staples:  the sort of ingredients that are required on a daily or regular basis, those that last for a good long while, and those that can always be counted upon in times of emergency.  Hence: coffee, milk, cream, eggs, butter, lemons, anchovies packed in oil, parmesan cheese, pecorino cheese, pancetta or guanciale, a tube of tomato paste, carrots and celery.”

In real life, there are times when opening the fridge door could serve as living proof of a law of physics (whose name escapes me because my own knowledge of physics is lamentably scratchy) whereby if someone utters a sound, and the waves of that sound ‘hit’ a barrier, the barrier will transmit a variation of that sound back if left unimpeded by empty space.  It’s what we call an ‘echo’.  Meaning, there are times when my refrigerator is so cavernously empty that if I belt out a mock rendition of a yodelling song, it will echo a riff of it back to me … as if to say, “Oi! What do you expect hee hoo?”

It is not often, however, that the fridge in our home is minimalist and yodel-like.  It’s usually quite ‘stocked’ … maybe not ‘well’ stocked, but stocked nevertheless.  And that’s because a fridge is as easy to clutter as a home.  It requires tremendous discipline to keep it in spanking shape.  Discipline and people who are tidy and methodical as opposed to nearly always being in a tearing hurry or trying to do too many things at the same time …

Try as I might to stick to three basic staples, there are times when the fridge door ajar reveals a congeries of plastic, glass, ceramic containers and/or parcels wrapped in paper and aluminium foil, storing all kinds of leftovers and ‘bits’.  It’s a state of affairs that will intransigently forbid echoing of any sort and, if anything, seems to glare at me defiantly as if to say, “Don’t give us that look of chagrin, it’s all your doing that we are here, cooped up in this fridge of yours.”  And then there are other times, mercifully, when all that bounty in the fridge is truly a pleasure to behold.  Variety is the spice of life and all that.

But variety is at variance with discipline, as I mentioned above … and recently I had not been a good girl and my fridge had been left to fend for itself — it if could speak it would have lodged a complaint with the RSPR (Royal Society for the Protection of Refrigerators). Thus it was that I recently resolved to undertake a thorough Feng Shui Decluttering and re-organization of the fridge, upon pain of succumbing to some grubby-fridge-related malaise.  It took me the better part of six hours, let me tell you … I washed and rinsed EVERYTHING, and whacked some sorely needed law and order into this most important of household containers and my zeal knew no end.  And yes, I did throw quite a lot of stuff away … which I always hate to do because it seems so wasteful.  But clinging onto ‘bits’ when you know you are not going to get around to utilising them is just sad and creates clutter in the fridge.  I found an inordinate amount of half empty jam jars which fuelled a sudden passion for making jam tarts (crostata).  “Very nice this crostata, good jam eh?” commented a family member and I didn’t have the heart to tell them it was actually a mixture of various jams.

Another treasure I came across as I foraged inside the fridge, that I was again happy to ‘transform’ instead of throw away, were these salt-dried anchovies. 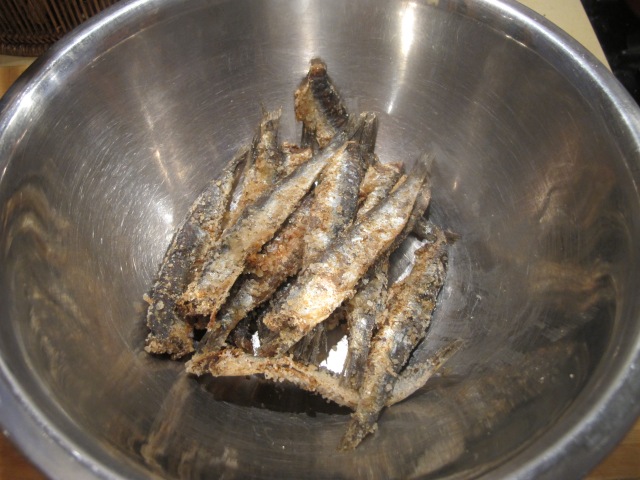 They look pretty awful don’t they.  I don’t know how long they had resided chez nous but it was definitely a case of months as opposed to days.  They were very dried out. 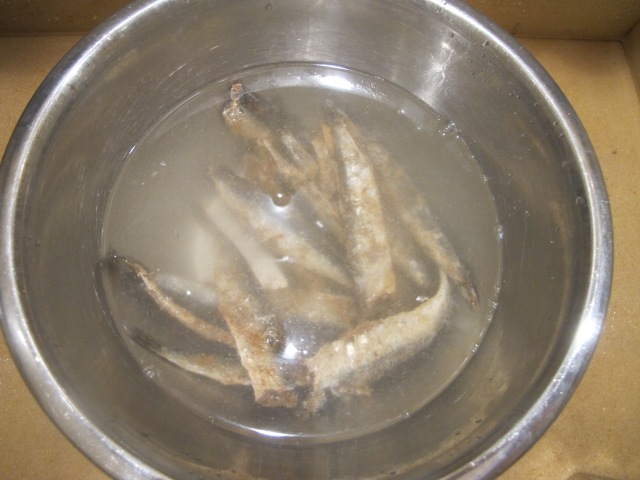 I put them in a bath … lots of baths actually … I kept throwing the water away and repleneshing it … and the final rinse saw a splash of wine in the water.

I had decided to make a Piedmontese dish called “bagna caoda” which translates as “hot sauce” — a ‘bagna’ being a sauce in that part of Italy and ‘caoda’ the dialect for the word “calda” meaning hot or warm.  I was almost 30 the first time I tasted this and fell in love straight away.  This is the recipe that my Torinese friend Piera Sacco taught me and I hadn’t made it in a long, long time!  It may not be exactly how she she would have made it but it’s very close. 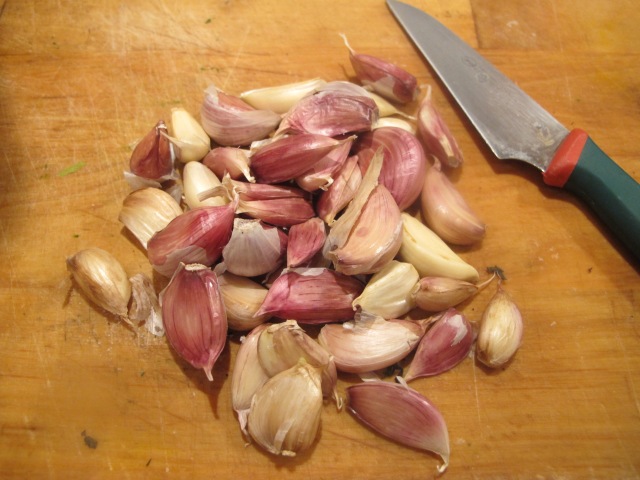 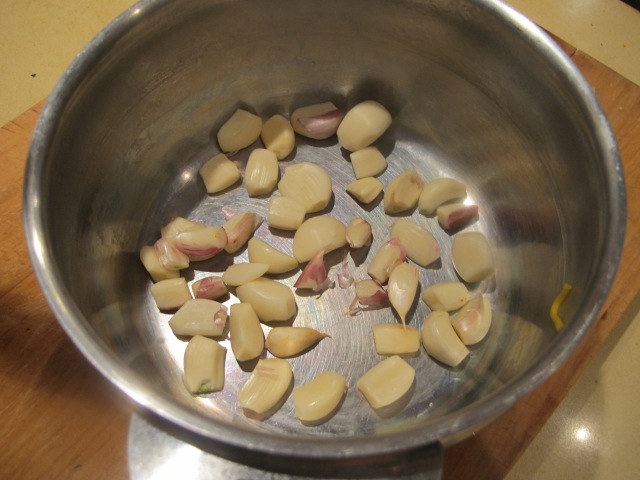 Here is the garlic, peeled and in a saucepan.  You could slice the garlic thinly … but who has the time? 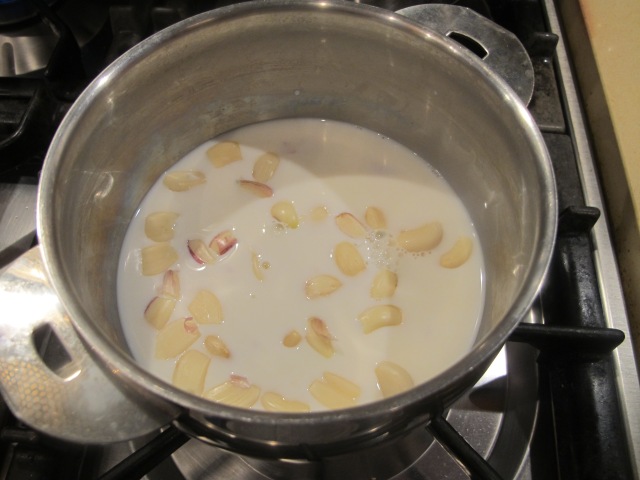 Cover the garlic with milk and simmer until the garlic softens.  This might take about 30 minutes and keep an eye on it, in case you need to add another splash of milk.  The reason we simmer the garlic in the milk is that we want to remove some of their pungency … otherwise the garlic would be raping your taste buds senseless instead of courting them.  That and no one will want to sit next to you for at least three weeks, you’ll reek so much. 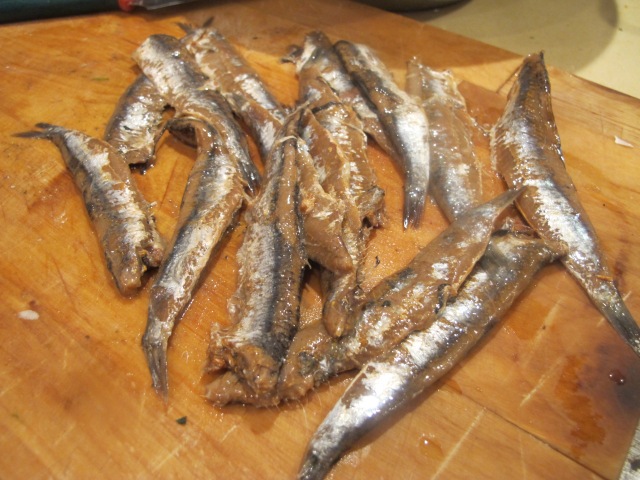 While the garlic was simmering … I got on with the anchovies that had fortunately recovered a bit of their freshness by now. 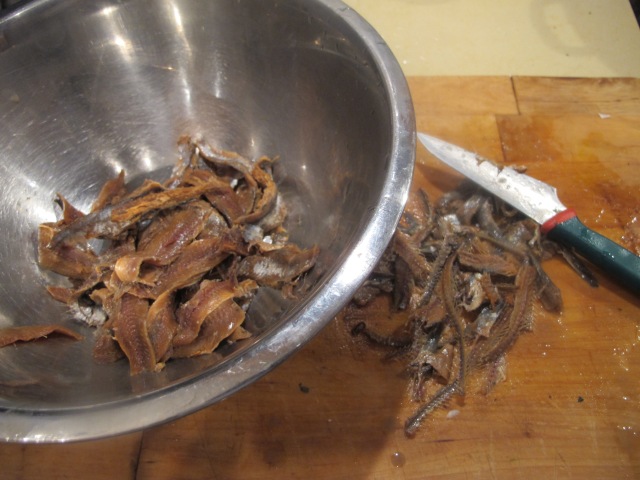 I proceeded to groom the anchovies: top and tail them, and removed all the bony and scaly parts. 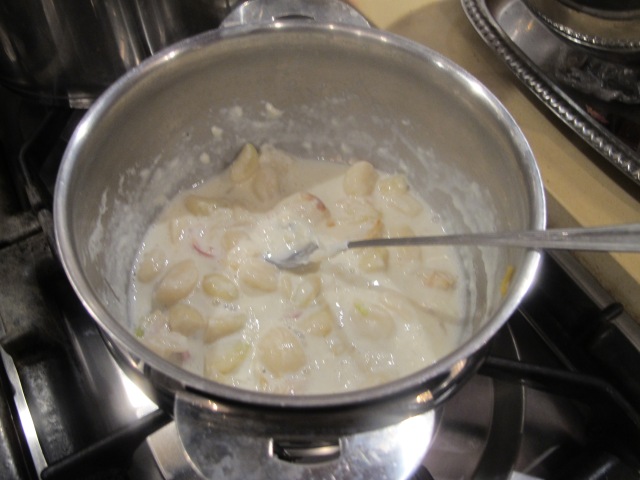 When the garlic had gone nice and mushy …. 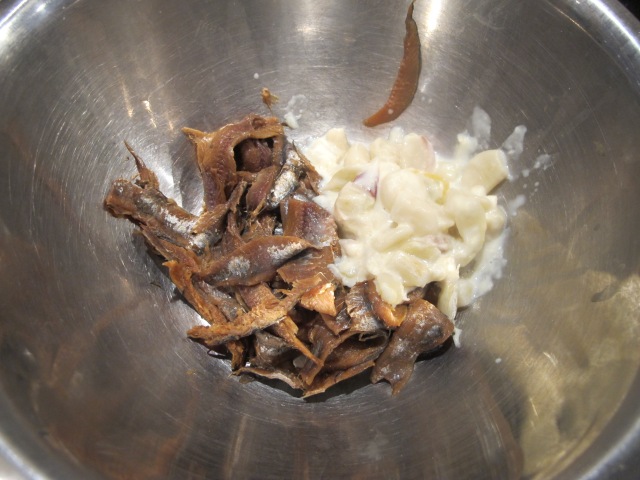 I introduced the garlic to the anchovies, trying to leave as much of the milk behind as possible. 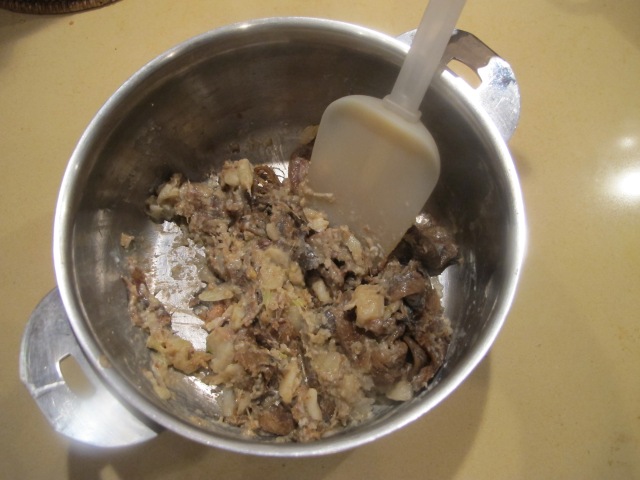 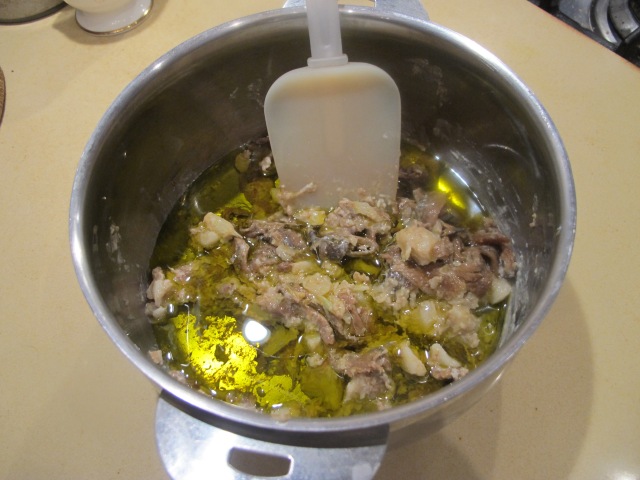 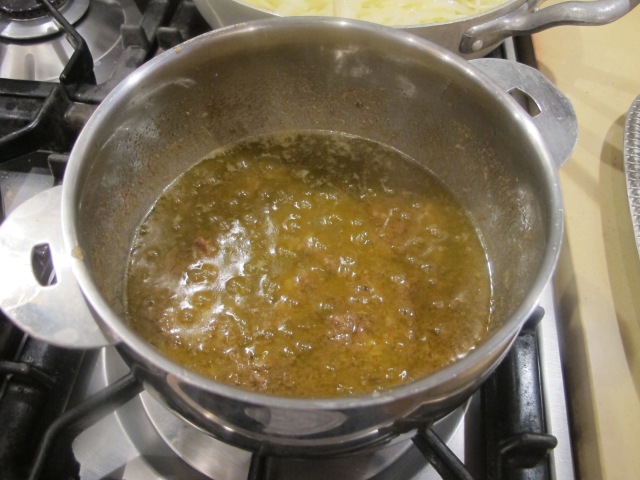 And I simmered what had by now become a paste for about another 20 minutes, over a very low heat.  The paste must not burn … and, again, do keep any eye on it and add a little more olive oil if necessary. 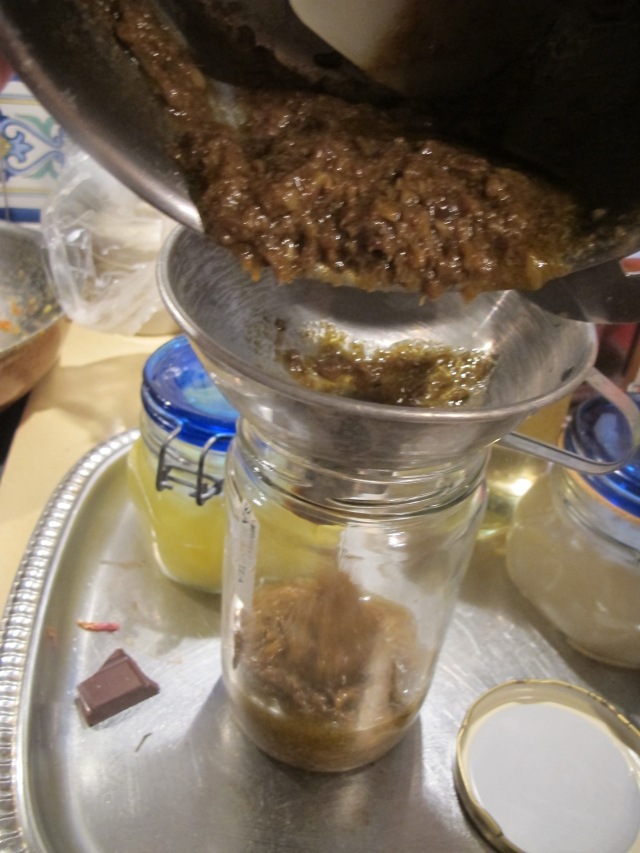 I then poured the paste into a glass jar (and yes, that’s a bit of chocolate I recovered in the fridge — even though, as we all know, chocolate should never be inside the fridge in the first place … and the other two glass jars contain various stocks that I did use up in a soup). 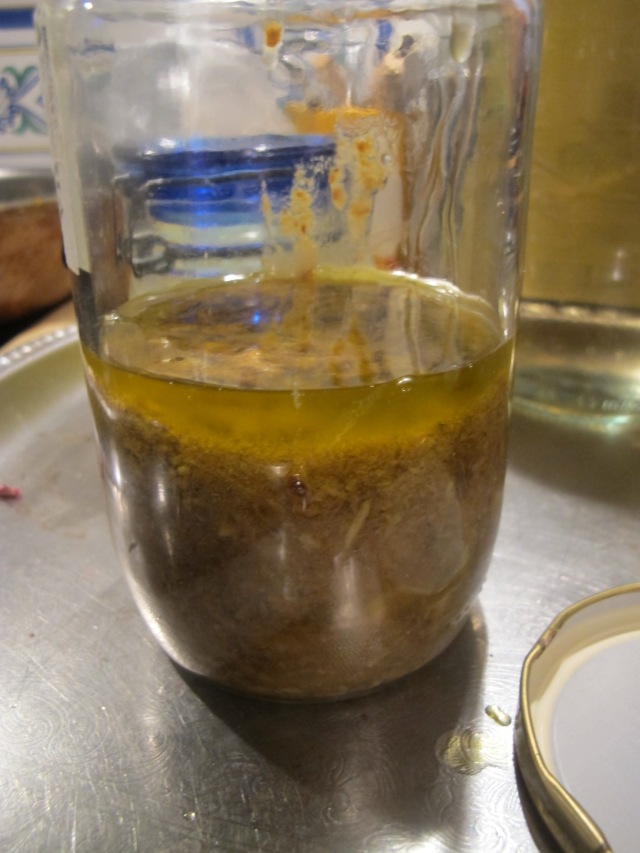 Once the paste had cooled down, I added more olive oil to seal it in, and covered the jar with its lid. 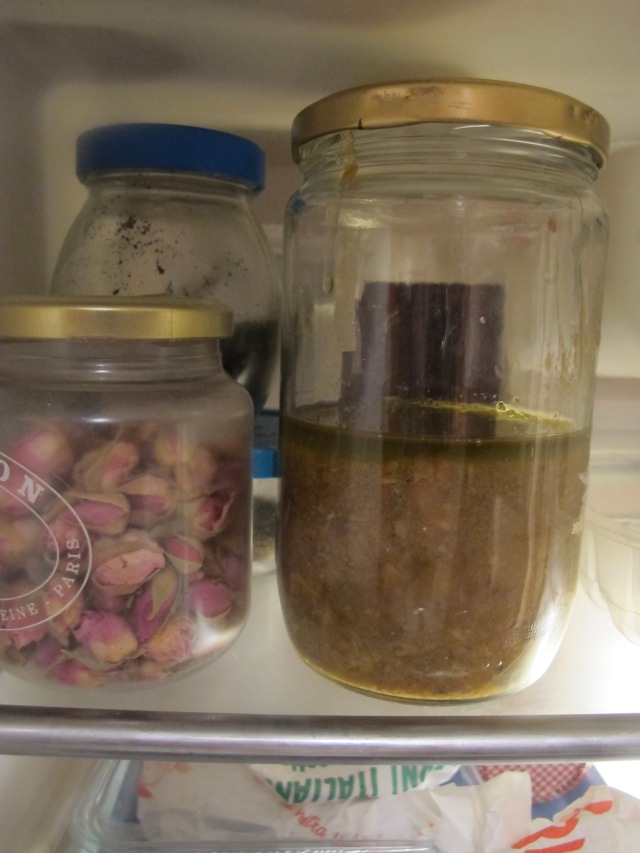 When it was cool enough, I placed the jar containing the bagna caoda in the freshly cleaned fridge, standing next to a jar of dried roses.  Talk about a contrast! 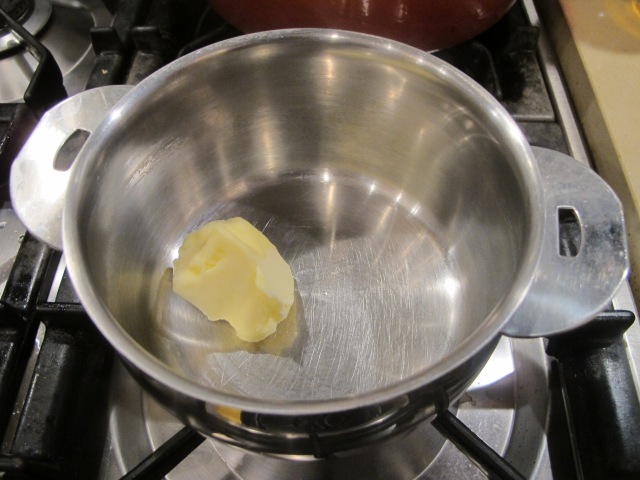 Segue a week later and we are having friends over for dinner and I thought we’d have bagna caoda as an appetizer.  I plopped a tablespoon of butter into a saucepan … 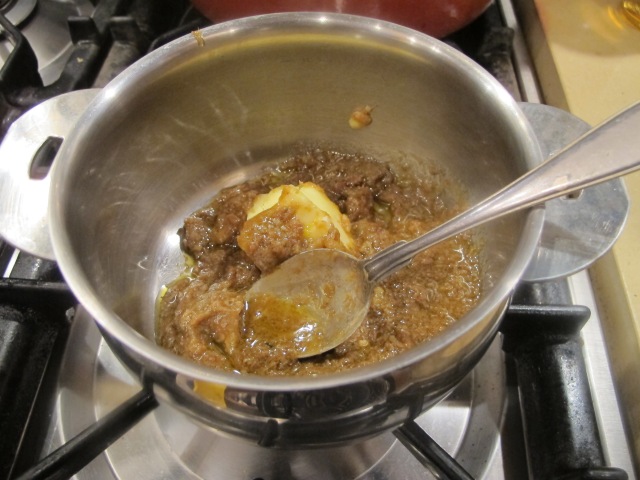 I added some bagna caoda and turned the heat on.  I left the butter to melt over a low heat, and simmered the sauce (it IS a sauce now and no longer a paste) for a few minutes, until everything melded together beautifully.

The bagna caoda is served hot, usually in a ceramic pot called a “fujot”, and a large variety of crudités are used to dip into it. 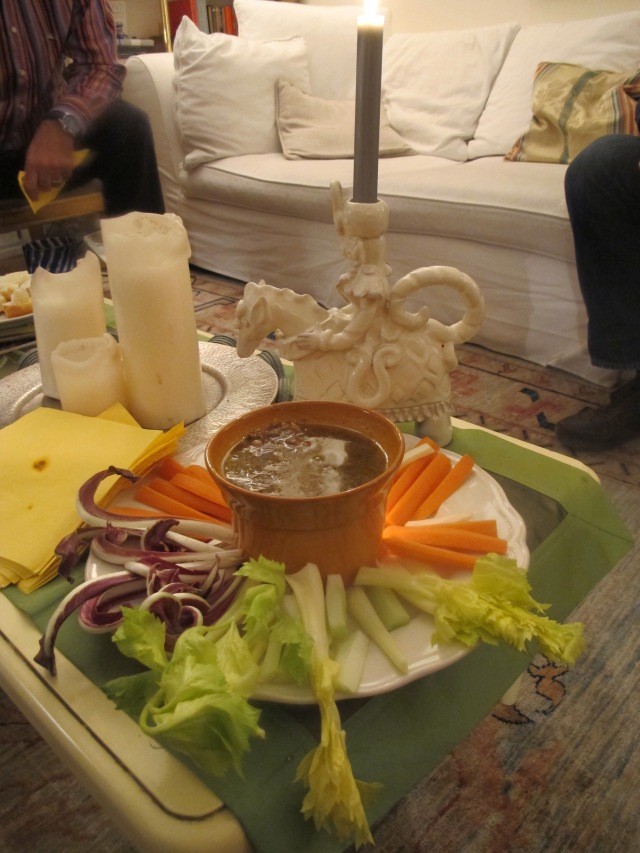 Silly me … I didn’t frame the photo so that you can see the aperture where a candle is burning and keeping the bagna caoda hot … but if you look closely, you can see that it’s there … there is a glow on the right. 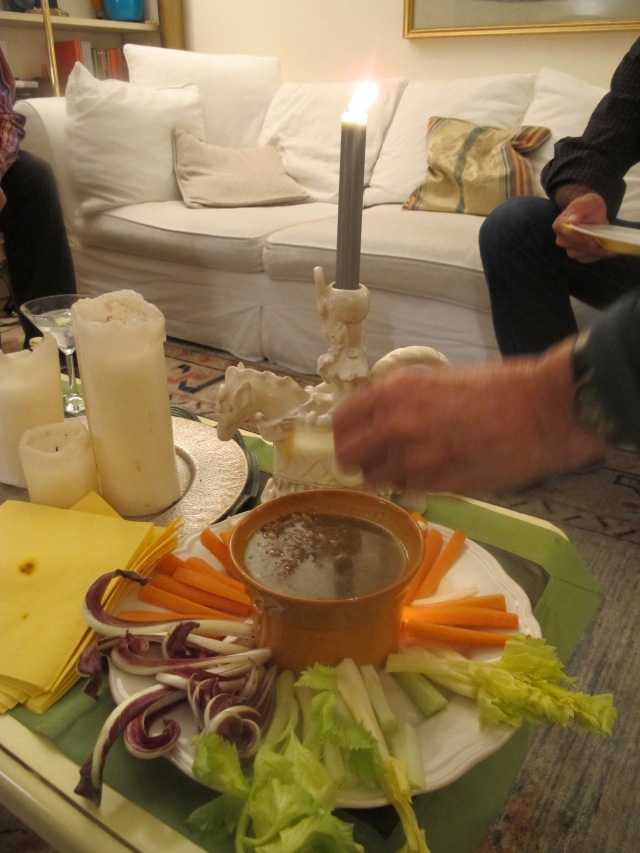 And it’s not just veggies and boiled potatoes and spring onions that you can use as a dipping tool … if you have any leftover bagna, you could probably use some over boiled meat? a little spooned over a poached egg? an omelette? green beans?  The mind boggles … this is a hot dip indeed.