Posted on April 30, 2013 by myhomefoodthatsamore

Easter has come and gone and we are already looking to the Summer.  As I write this post, I am not even in Italy and wonder why I should bother posting it.  I then take another look at the photos and realise that I like the simplicity of the dishes.  This meal was eaten the day after Easter which goes by the name of ‘Pasquetta’ or ‘little’ Easter.

Easter, inspired as it is by the Christian faith, enters the Italian language by way of sayings and proverbs, the most famous of which is ‘felice come una Pasqua’, to mean ‘as happy as Easter’ – just as in English one could say ‘as pleased as Punch’.  I suspect that the joy referred to by the metaphorical Easter has more to do with the end of the self-imposed rationing of food during Lent (40 days just like the 40 days Christ spent in the desert) than with the risen Christ.  The colour purple is considered unlucky for actors in Italy, and that is because during Lent (when purple was the colour to adorn the churches) they were not allowed to perform which meant, of course, that they would not be earning any money.  So, who knows, maybe it was the actors who started up the phrase ‘felice come una Pasqua’ because they would finally  be able to perform/earn again and eat a decent meal.

Another saying goes like this: it is important that you spend Christmas with your family, but you can spend Easter with anyone you like (‘Natale con i tuoi, Pasqua con chi vuoi’), which makes no sense to me whatsoever since I am sure that in the past, Easter Sunday would have been most certainly celebrated within the home with family and loved ones. The following day, instead, Easter Monday that is … has traditionally been seen as a day to go out into the countryside for a picnic.  It is a lovely tradition and we all love it but this year it was pouring with rain, and we were quite happy to stay in and watch some films.  The meal we had was not exactly a picnic (ha ha ha) but still hinted at the freshness of Spring and the bounty that his lovely planet presents us with at this time of year. 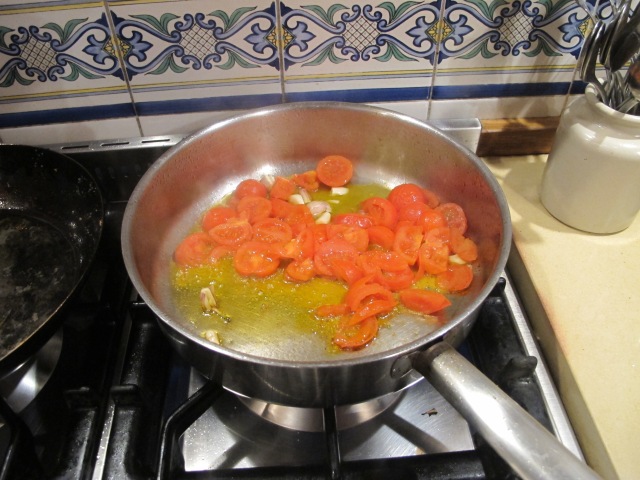 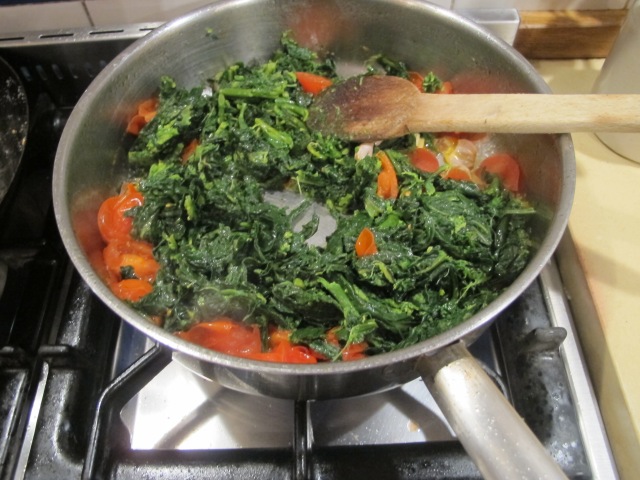 Here is the completed dish, made up of olive oil, garlic, tomatoes and previously blanched cavolacci.

Fresh borlotti beans, previously boiled, and now heated up in a pan with olive oil, garlic and sage. 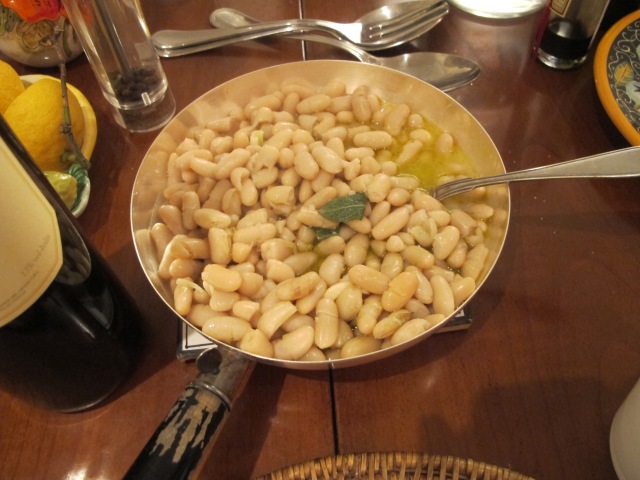 Fresh ricotta and primosale cheese bought by the Sardinian shepherd (the one with a Russian wife – I’ve spoken of them before, I am sure) … and that’s it.  Some bread and wine and voila … the Pasquetta picnic is complete.

Community celebration via food, wine and all beautiful things.
View all posts by myhomefoodthatsamore →
This entry was posted in Contorni and/or side dishes, italian home food, Uncategorized and tagged borlotti, Easter, Pasquetta, primo sale, ricotta, the colour purple. Bookmark the permalink.