On a Silver Plate – Cream, Cognac and Posh Polpette

Posted on January 10, 2013 by myhomefoodthatsamore

The thing with meatballs is that you either love them or sneer away from them if you’re not Italian.  I’ve yet to met an Italian who doesn’t like his or her ‘polpette’ (‘little pulps’ is the literal translation of meatballs in Italian) and it has been a staple of home food always.  People may associate meatballs with clever husbandry or a downright staple of the poor, and it is indeed true that a little minced meat will go a long way but, rest assured, in Italy polpette will grace the tables of even the richer folk.  The other thing is that, as mentioned above, the word ‘meatball’ in Italian does not bring only meat to mind — and polpette can be made with aubergines, fish and even leftover bread.  Polpette are also thought of as finger food.  And children and older people obviously love polpette because they are easy to chew. This post is a little tongue in cheek today and the idea was to jazz up polpette in a fancier presentation.  Take a look!

Meatballs that are cooked the ‘damp’ way – Polpette in Umido

Then, chop up an onion or a couple of shallots and stew them over a low heat with some olive oil and butter.  Do not allow them to brown in other words and you can do this by adding a tiny bit of water.  Once the onions or shallots are cooked, add the snowy, flour-dusted polpette and cook them on both sides.

The amount of time you spend cooking each side depends on how you like your polpette.  They should obviously not be overcooked, nevertheless one doesn’t want the polpette to be raw either … so I would say that 3 minutes per side is the minimum.  I have noticed that instsinct drives me to  cook one side slightly longer than the other.  Sprinkle a little salt and pepper too.

When the polpette are nearing the end of their cooking time, add a good dollop of fresh cream – as little or as much as you like.  And do try not to pour the cream over the polpette themselves … rather, aim for the pan and the juices that are simmering there.

Grab a bottle of cognac or brandy …

Pour a good glug of the cognac or brandy into the pan — again, being very careful not to hit the polpette.  You want to pour the liquid into the liquid — think of it that way.  Turn up the heat at this point so that the alcohol gets a chance to evaporate and swirl the polpette around in the pan.  Go on … it’s fun!  Switch off the heat and serve straight away.

Transfer the polpette to a silver dish … add some green ‘bits’ (parsley, mint, thyme, whatever takes your fancy). 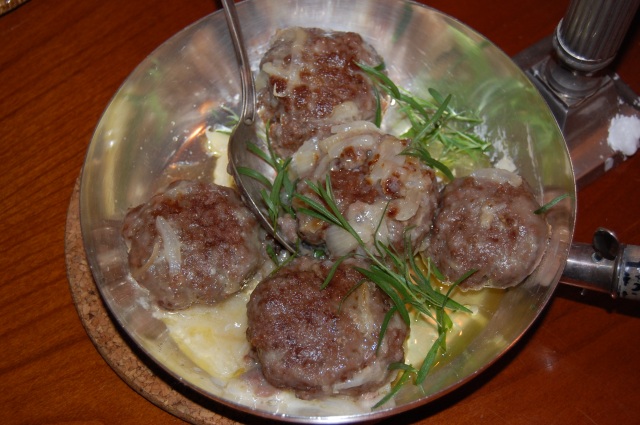 And there you have … posh polpette!  Enjoy, they are seriously good.

3 Responses to On a Silver Plate – Cream, Cognac and Posh Polpette