Posted on December 19, 2012 by myhomefoodthatsamore

Polenta may not be the most exciting of dishes unless a) you are really hungry and b) you are really cold.  It is these two factors that render polenta sublime.  Polenta (the corn meal) is similar to bread, rice and pasta in that it requires an accompaniment … and for choice in companionship, the sky is the limit (with a tomato sauce, without tomatoes, with fish, with meat, with sausages, with both …).   The following recipe is the classic tomato-based one that I have previously described using a pressure cooker (https://myhomefoodthatsamore.wordpress.com/2011/12/22/taking-the-pressure-off-polenta/).   This post is the same recipe using an ordinary cooking pot, for those who either do not own a pressure cooker or do not like the idea of using one.

Pork sausages.  Skin two or three of the sausages and prick all the rest with a fork …

I am not afraid of fat but too much fat is loathsome …. so I used a pair of scissors to cut off any excess off the spare ribs. 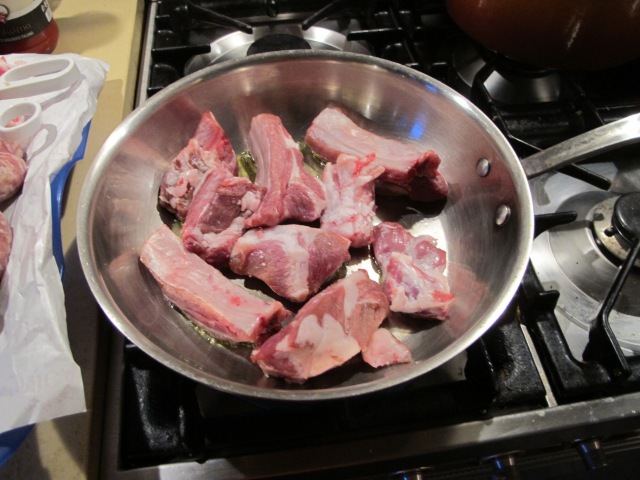 And brown the spare ribs … first on one side.

While the first batch of ribs was browning, I poured two bottles of tomato sauce into a large casserole.

Time to brown the ribs on the other side.  And do sprinkle salt and pepper.

When they have gone a nice golden colour, put them directly into the casserole containing the tomato sauce. 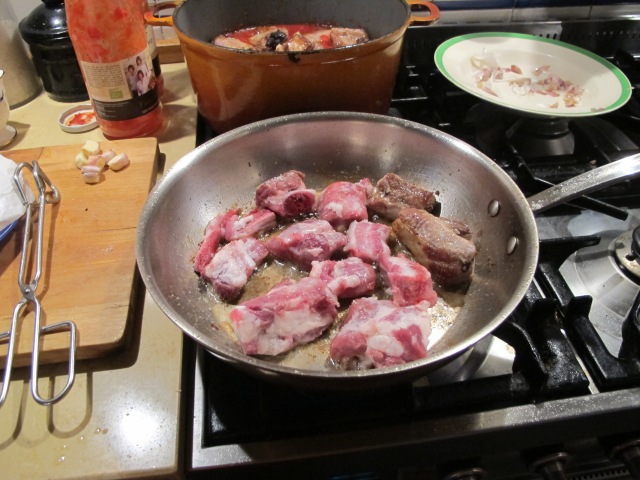 Here are two sausages that I skinned.  I used the meat as mince, to enrich the sauce. (I ended up skinning a third sausage … our eyes are our best gauge for quantities at times!)

Here are some cloves of garlic …

Which I put directly into the frying pan where the spare ribs had been cooking.

And poured it into the saucepan, turning the heat up. 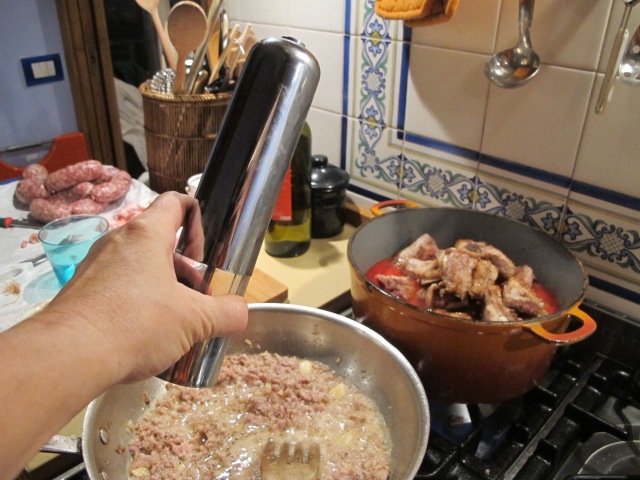 I added salt and pepper.

And when the sausage meat was cooked, but was still swimming in some liquid sauce, I added the entire contents of the frying pan to the rest of the ingredients in the casserole.  I could see that the tomato sauce wasn’t going to be enough …

So I added some more.  It’s always a good idea to have plenty of tomato sauce in the store cupboard!  Very good for Bloody Mary’s too …

I put the cover on the casserole and let the whole stew stew for two hours, stirring occasionally.  At the end of the two hours, I put the sausages in the frying pan.

I cooked them on a medium heat for about 10 minutes ….

And added them, finally, to the rest of the casserole.  I switched the heat off because if you overcook sausages they become all chewy.

When it was time to eat the polenta, I turned on the heat to bring it to a simmer again … then switched it off and added some herbs.

Steaming hot polenta on the table … 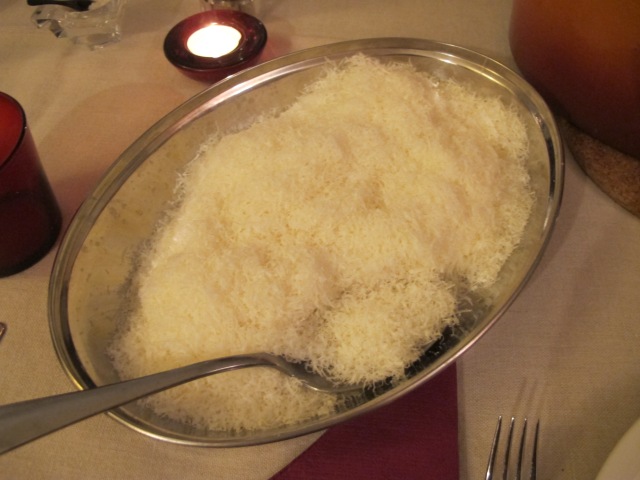 And, for those who like it, and I do, some grated pecorino cheese to top it all.  Very satisfying on a freezing cold Winter’s night.    This is the epitome of slow cooking, I suppose, but the actual prepping doesn’t take long so it’s quite easy to make.