Posted on September 7, 2012 by myhomefoodthatsamore

Another way to render the courgette more appetising (see previous post on boring courgettes) is to stuff it, in other words, to use the courgette as a casement, as an ‘excuse’ to savour whatever else you are going to eat with it.  Today’s post is about ‘zucchine ripiene’ which are a traditional and classic home dish for the warmer months of the year.  Let us not forget that until not so long ago, courgettes were ONLY available during the Summer.  As with meatballs, a little goes a long way with this recipe but no one would ever think of zucchine ripiene as poor people’s food, just comfort food. 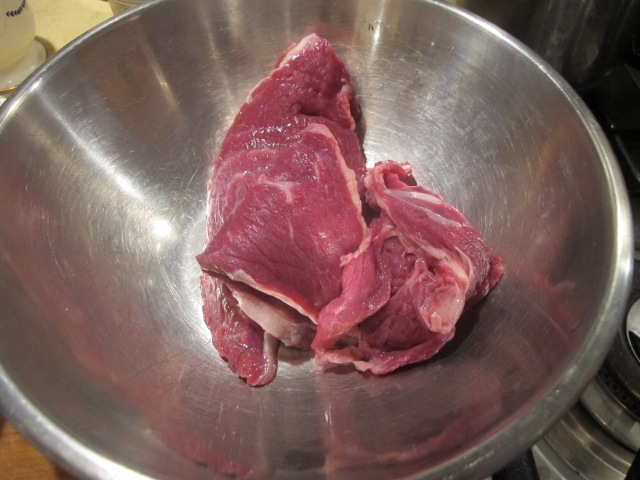 You could  buy minced meat and do away with this initial step.   However, I like to make my own ‘concoction’ for the stuffing.  And it consists of 500g of rump steak.

And here is 200g of mortadella.  You could use ordinary ham instead. 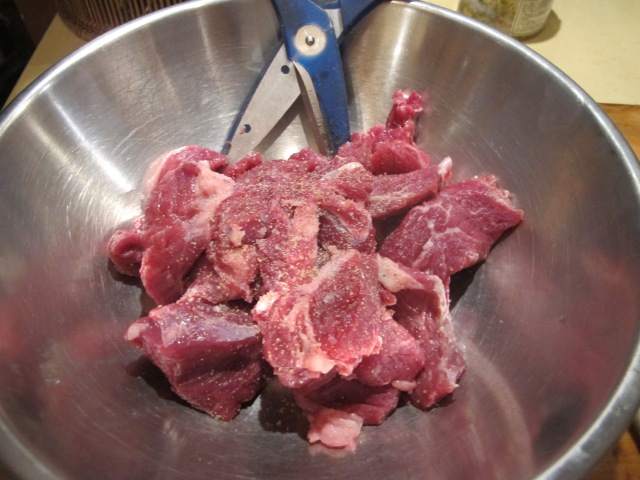 Those of you who are good at chopping meat finely at home — by all means use your very sharp butcher’s knife.  My alternative was to use scissors to cut the steak into smaller pieces.  Sprinkle salt and pepper.

Here are the ‘boring’ courgettes.

The insides of the courgettes must be removed. 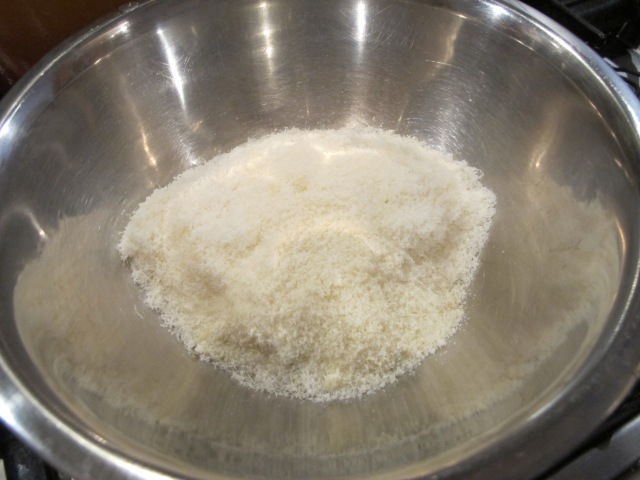 Put the steak, mortadella and parmesan cheese in the food processor.  Add a pinch or salt and some freshly grated nutmeg and pepper.

I also added 1 egg yolk.  I had a very handsome young man helping me that evening.  He pulsed the ingredients until we had a good consistency.  I know, I know, I know.  Raw meat is supposed to be cut with a knife and not blitzed in the food processor.  But every now and then, the food processor offers a very good short cut.  The trick is not to overdo it and use the pulse button. Brrum brrum brrum, as I call it onomatopoeically. (Now THAT’s a lovely word I hadn’t used in a long time … onomatopoeia.  I still remember how they taught us to spell it at school: ono- mato- pee- oh- eee-ay-a. 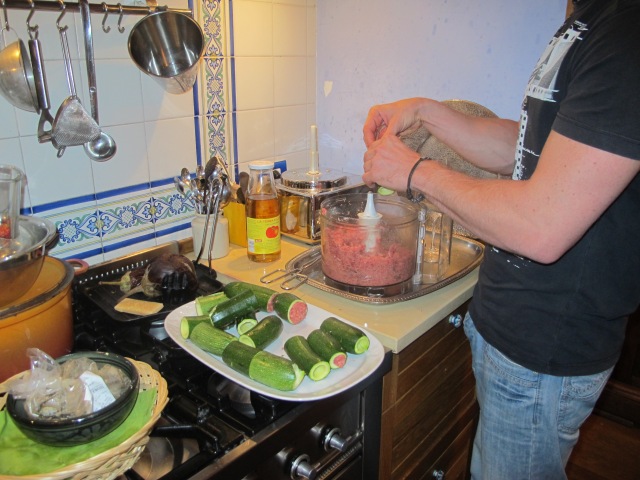 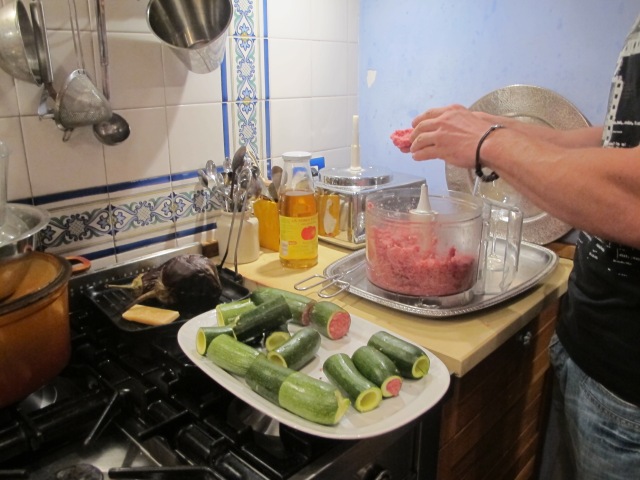 It’s easier, too, if you roll the minced meat in your hand rather as if you were rolling a cigar, I suppose, before inserting it into the courgette. 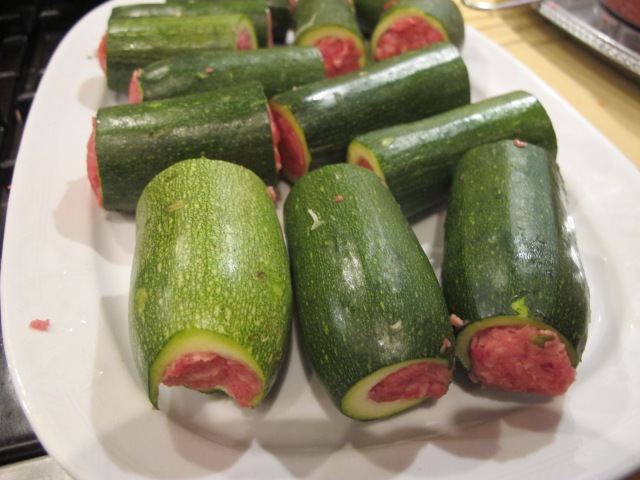 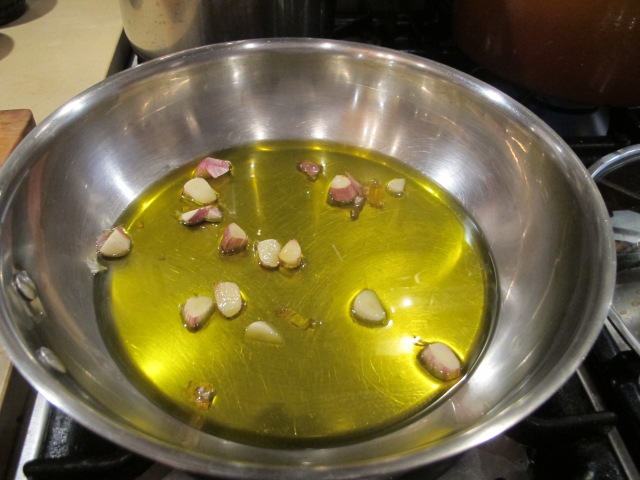 Cook some garlic in a large saucepan with plenty of olive oil in it. 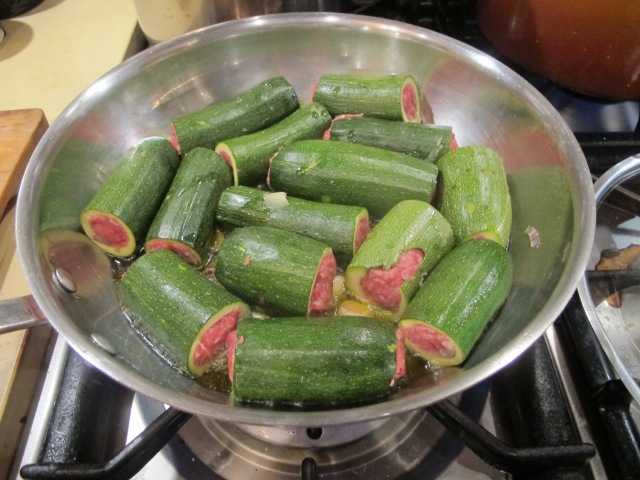 When the garlic has turned golden, add the courgettes and brown them for a few minutes, rolling them around in the saucepan so that they get nicely coated in the garlic-scented olive oil.

The courgettes can be cooked with our without the addition of tomatoes.  I do an in-between job and add only a few tomatoes.

Sprinkle salt and pepper, then cover with a lid and cook for about half an hour on a low heat.  This is a vegetable stew of sorts and requires a surprisingly long time to cook.

In a waste-not-want-not fashion, I used the stuffing that was left over to make meat balls, why not! 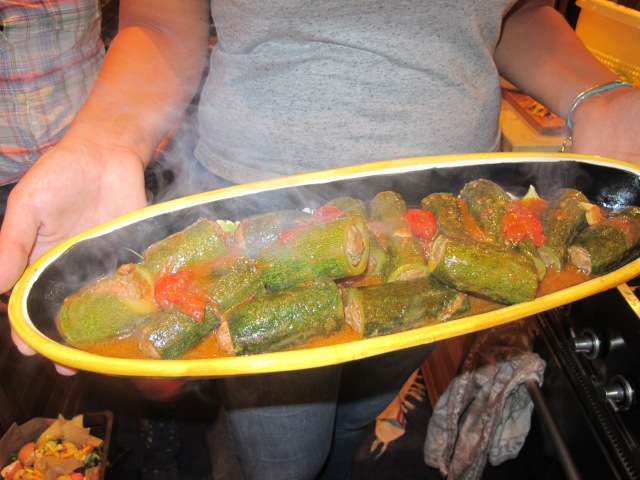 Here is the serving dish with the piping hot zucchine ripiene — you can see the steam (you can, unfortunately, also espy my recycling bin on the left, ooops.

The only trouble with this dish is that it requires quite a lot of bread to mop up the sauce afterwards.

I had left some of the sauce in the pan and used it to cook the meatballs.

And that is how one recipe became two: stuffed courgettes and meatballs for supper.  Homely and nice and plates almost licked clean (the sauce is very saucy).