Cuscus with venus clams and courgettes

Posted on July 14, 2012 by myhomefoodthatsamore

This is a variation of a cuscus dish I blogged about on 14 October 2010 (The Wonders of Cuscus).  It’s basically the same dish but this post … aha! … has blow-by-blow photos.

One of the reasons I started this blog was to provide my children and friends with recipes that made sense ‘visually’.  I don’t know about you, but I always found recipes very difficult to fathom, and most of them would exacerbate my already tenuous sense of comprehensive patience.  Very often, I would get to the end of the recipe, spend a good 15 minutes trying to ‘visualise’ it, only to come to the soul-gutting conclusion that the writer was batty or lazy or both.  “Now, WHY didn’t you tell me that BEFORE you stupid so-and-so!!!” I would hiss and stamp my foot very childishly.  I am a very …. ahem … child-like cook!  I like things to be be spelled out and I also like, figuratively-speaking, to be held by the hand as I venture with any new recipe.  I do hope that the recipes I dish out in this blog ‘make sense’ to the reader and come over as being reasonably easy to make.  I try very hard — that’s all I can say.  Anyway … back to the recipe.

Here are the courgettes or zucchini, whatever you prefer calling them.

Gorgeous lemons … their skins untreated … their scent serene and seductive. 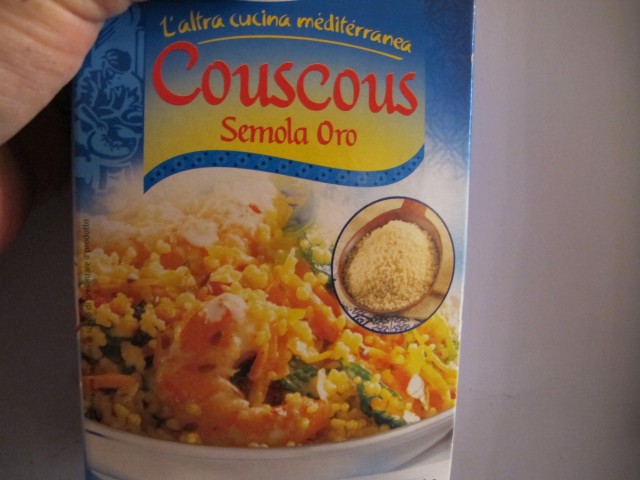 A packet of cuscus …

Wash the courgettes and trim them and cut them in half. 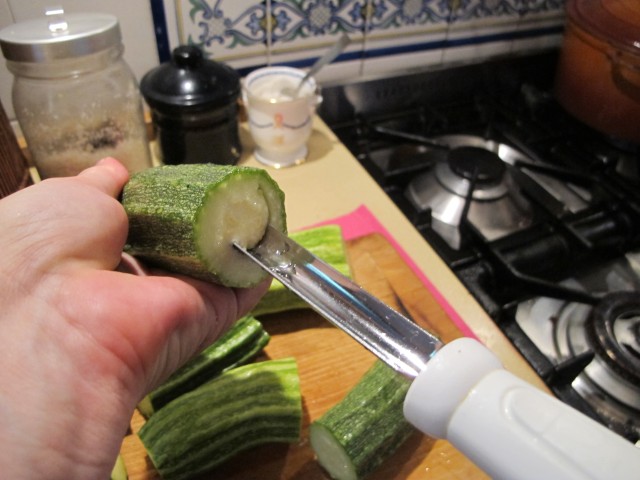 Remove the pulp from the inside of the courgettes.  There is a special knife for this, as you can see in the photo.  If you haven’t got one, use a small knife and a spoon to scrape out the white flesh from within the courgette.

This is how it’s done: insert the special knife at one end of the courgette with your right hand and slowly rotate the courgette around it with your left hand … (do the opposite naturally if you are left-handed).

And remove the white flesh … do this at one end of the courgette and then at the other. 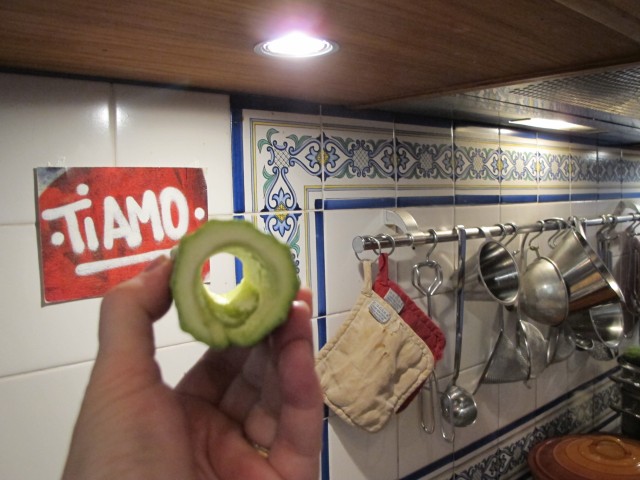 And this is what you end up with.  Set aside and carry on, treating the other courgettes the same way. 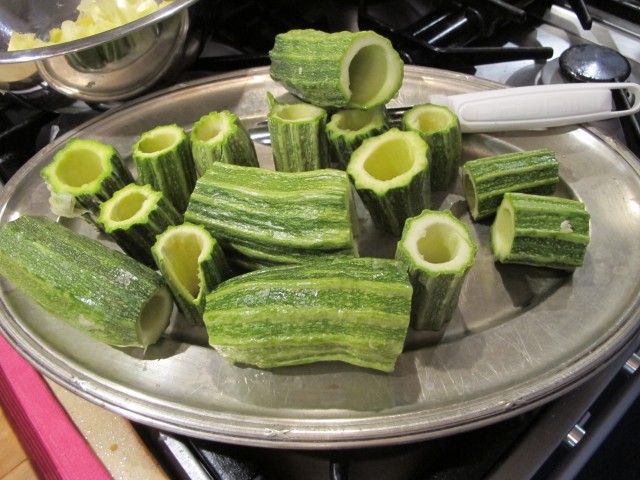 And this is what you don’t want … the inside tasteless ‘flesh’ of the courgettes: you can use them to make soup, if you like, or even vegetable fritters … but I just threw them away.

I then proceeded to cut the hollowed-out courgettes into smaller, almost bite-size pieces.

I then removed them with a slotted spoon and placed them in a bowl of very cold water (I could have put some ice in there too but I wasn’t in the mood that day).

Here were my lovely venus clams that had been soaked in salted water and then rinsed, to remove any hint of sand …

The large frying pan … in goes the olive oil and some cloves of garlic … cook the garlic until it turns golden.

Add the clams … all in one go.

Cover the pan with a lid … so that the clams get to steam themselves open and absorb some of that nice, garlic-scented olive oil.

Here they are a few minutes later.  Turn the heat OFF.

Now, pour the packet of cuscus into the frying pan and use a wooden spoon to mix everything up. 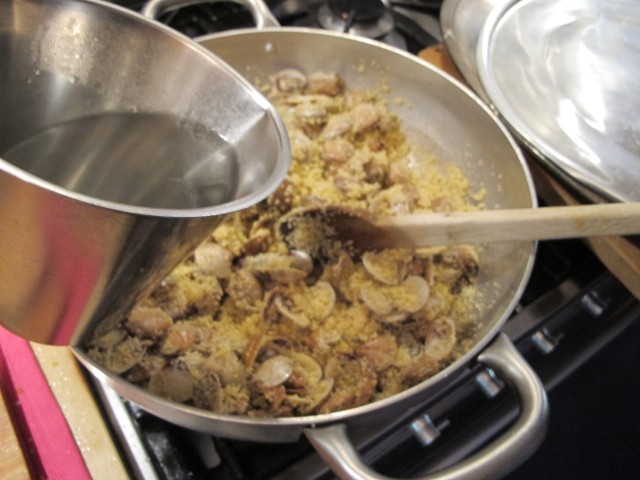 Then add boiling water.  I added half a liter of boiling water (follow the instructions on the packet of the cuscus), guessing that the liquid from the clams would make up the rest of the liquid necessary to cook the cuscus.

Combine the cuscus with the boiling water and the clam juices … and then cover, again, with the lid.  Remember the heat has been turned off.  The cuscus will absorb all the liquids and reach a state of edibility in a matter of minutes.

While the cuscus is absorbing all the liquids … go back to the blanched courgettes and slather them in olive oil and lemon juice (N.B. in case you are wondering why the lemon is bereft of its zest … it’s because the zest of these lemons is so precious, I do not like to waste it.  So I peel the zest and freeze it … and then squeeze the lemon for its juice).  Season the courgettes too with a little salt and white pepper.

Here are my little courgette soldiers : atten …tion!  Ready to be stuffed …

The cuscus is ready too. 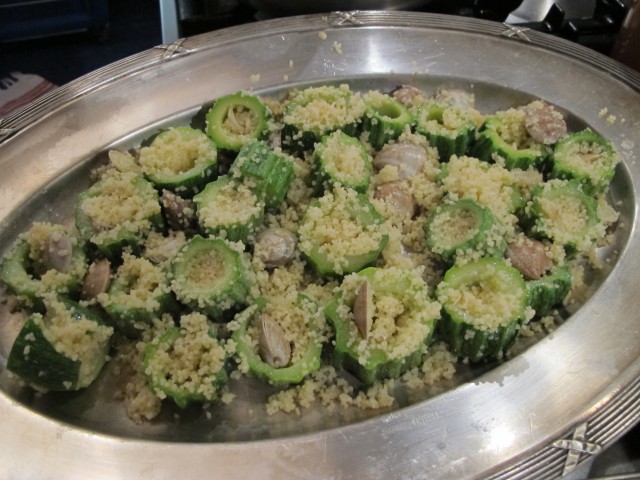 Stuff the courgettes with the cuscus and the clams.

Here they are on the serving dish, looking a bit scruffy.  That’s because I was taking this dish along to a friend’s house as part of the dinner.  I had to wrap it all up in cling film (plastic wrap /saran wrap) so that it wouldn’t spill all over the place in the car.

On my friend’s dinner table along with other, very oh la la delicious delights for the evening. 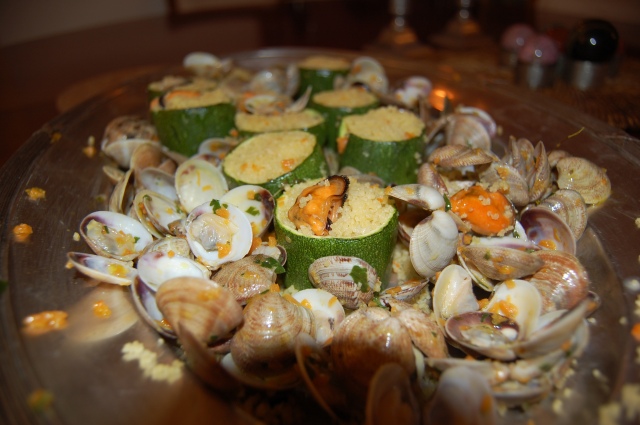 A close up of something similar from October 2010. 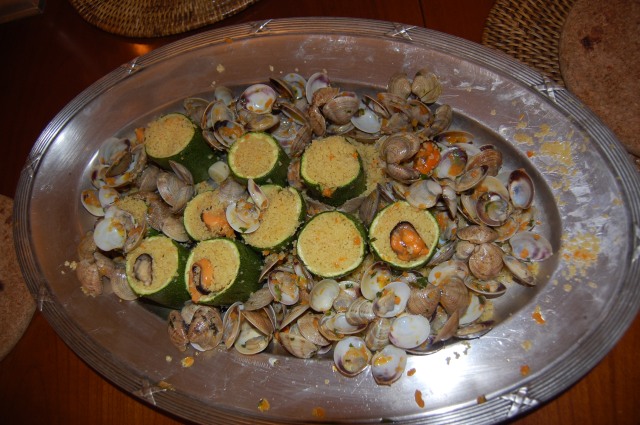 There’s just something about venus clams (‘vongole’), isn’t there.

Community celebration via food, wine and all beautiful things.
View all posts by myhomefoodthatsamore →
This entry was posted in Fish and seafood, italian home food, Uncategorized and tagged courgettes, cuscus, venus clams, zucchini. Bookmark the permalink.

2 Responses to Cuscus with venus clams and courgettes