Posted on March 2, 2012 by myhomefoodthatsamore

There is a very traditional soup, with variations throughout Italy, whose body consists of stale bread, added to which, besides broth, are other herbs or vegetables and usually some kind of grated cheese and olive oil.    They all taste pretty delicious in a comforting way and a very dear American friend of mine thought it was a pity, really, that the only name Tradition managed to come up for them was “pancotto”:  which literally means “cooked bread”.  The Tuscan version  has an even less attractive nomenclature: “acquacotta” — which translates as “cooked water”.  It doesn’t sound very enticiting, now, does it?  I thoroughly concur with my friend even though I had never thought about it until she mentioned it.

These were soups that came from whatever scraps a housewife could put together.  Bread holds a sacred place in Italian food generally, it is revered and no meal is ever complete without it.  Even today, Italians will feel very bad about throwing away stale bread, thinking it the height of waste.  There are always uses for it … and soup would have been just one of them.  So …. let’s see what kind of cooked-bread I ended up making! 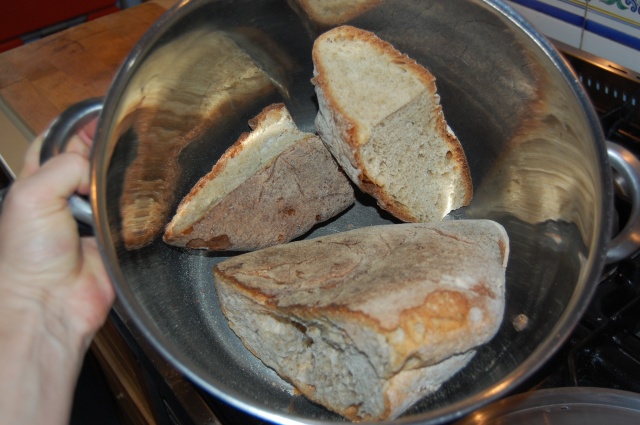 Please believe me when I say this bread was very dry and stale indeed.  You would have had a very hard time trying to cut it with any knife … 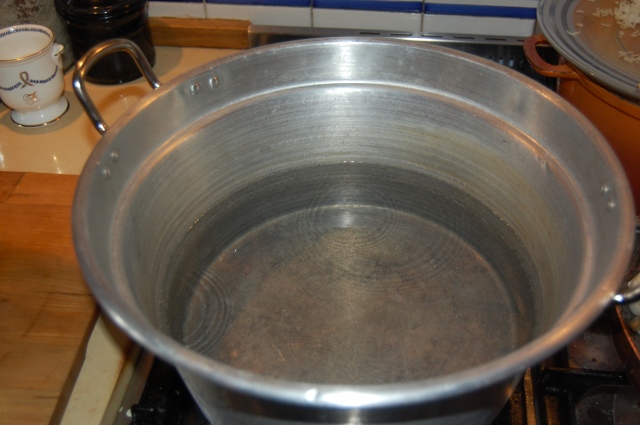 Here is an ugly but very useful large pot …. lots of water within which I heated before adding the stale bread: 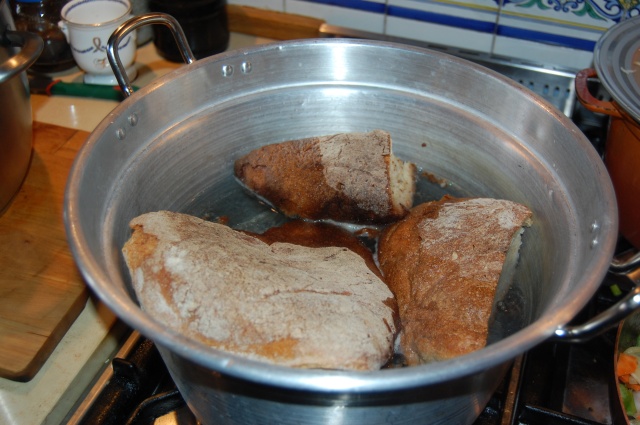 And when it’s gone all soft and mushy again, out it comes, and gets put into another large pot.

I roughly chopped and then washed some cavolo nero (kale).

That got cooked too, for a few minutes, in the same water that had softened the bread. Drain and set aside.

This is what is left and gets thrown away.  It is too bitter and would ruin the soup.

Drizzle some olive oil into the pan and add chopped garlic and chopped onion and a few peppercorns.

Some carrot and celery will also add to the final taste.  Sauté for a few minutes but do not brown. 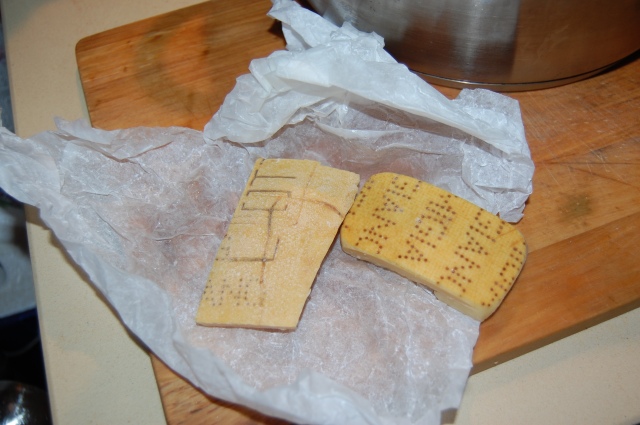 These are two rinds of parmesan cheese … another food item that would never have been thrown away (I keep mine in the freezer).  The rind can be grilled but most usually it makes a great addition to any hearty soup. 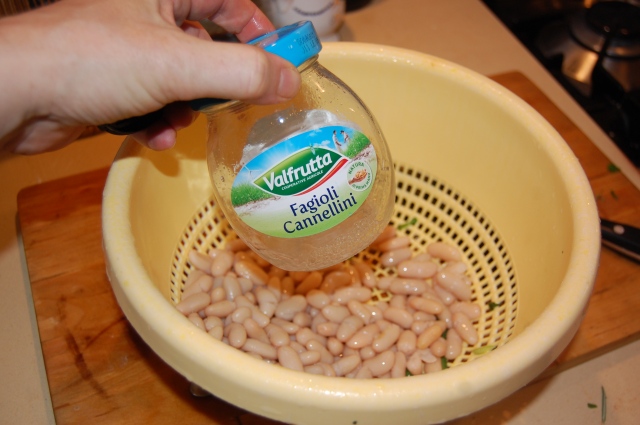 Beans would very often accompany these soups … and so who am I to disagree with tradition!  Keep some cooked beans to hand.  They get added to the soup after it has cooked for a while.  If you add them too soon, they become too mushy.

THE COOKING OF THE BREAD AND WATER BEGINS!

Add the parmesan rinds to the soup pot … 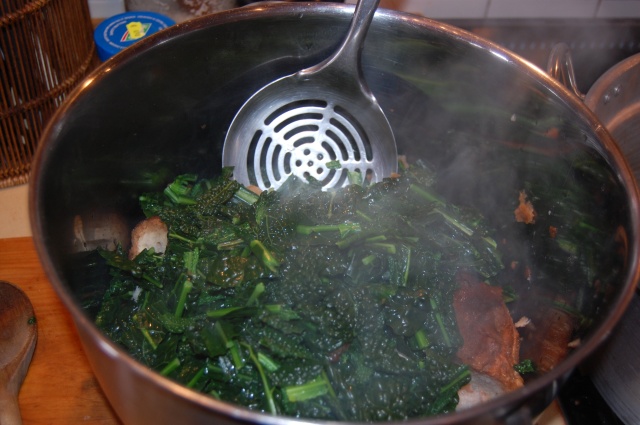 The “cavolacci” (translation: “bad” or “ugly” cabbage) as they are called here in Lazio go in next ….

Next, the soffritto … the sautéed carrot, onion, celery and garlic ….

Pour in water, enough water to cover everything.  Turn on the heat and simmer for about 30 minutes.  Add salt and pepper somewhere along the timeline. 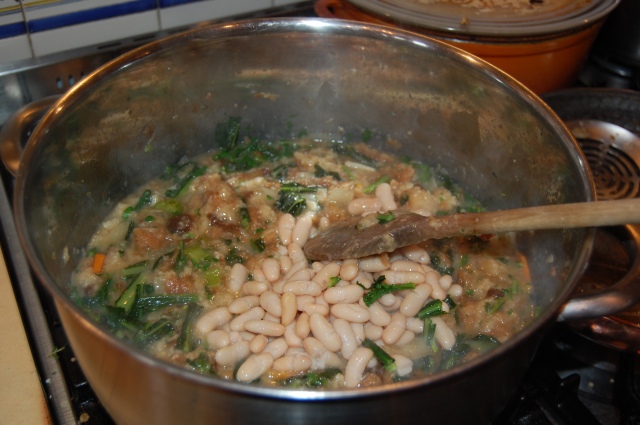 Add the cannellini beans about ten minutes before serving. 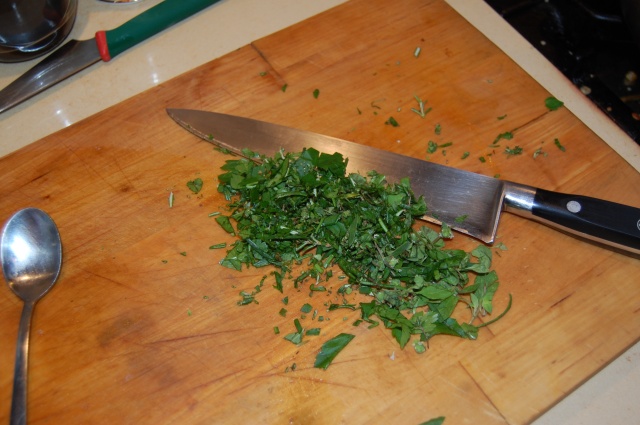 I love my herbs, so I always add some chopped mixed herbs too, towards the end.  This is a mixture of parsely, marjoram and rosemary.

The parmesan rinds will have given off their final taste to the soup and can be removed. Taste the soup and make sure all is well in the salt-and-pepper department.

You can serve this soup with either grated parmesan or pecorino.  A drizzle of olive oil.  And for those who like chilli, add that too.

P.S. And yes, I do know what Lord Curzon supposedly said … “No gentleman takes soup at luncheoon”.  Well, in Italy they did and they do … and it wasn’t just the ‘gentlemen’!