Trippa alla romana via a Chinese restaurant in London

Posted on February 18, 2012 by myhomefoodthatsamore

Trippa is Italian for tripe.  Tripe was something I did not normally eat — in fact, it always used to surprise me the way friends or relatives got all excited at the prospect of eating tripe.  The very thought made me queasy.  My mother makes a very good tripe, apparently, and my husband loves it.

The closest I ever got to eating tripe was tasting a teensy weensy bit in a green sauce at Anna Dente’s michelin starred restaurant “Osteria di San Cesario” about 4 years ago — and I congratulated myself for not gagging as it slithered down my throat (it didn’t taste bad, however, I had to admit).

The Damascene moment for me and tripe to become friends happened earlier in January, in London, when Gareth Jones treated me to the best Dimsum I have ever had the good fortune to eat, at the Joy King Lau in Soho.  A passionate raconteur, Gareth was regaling me with stories and keeping me spell bound with tales and adventures and I was all ears and palate as he pointed to the tripe (again green) on display at our table.   It took me less than 5 seconds to decide it was high time I became an omnivore … at least where tripe is concerned.  I told myself I was going to love it and that was that!   So thank you, Gareth, for lowering my resistance to offal via your Sheherazade mood and tales.

Gareth is the mover-and shaker-creator of the Blue Collar Gastronomy movement (www.GarethJonesfood.com) and I whole heartedly share his motto over food: “Ever meal, however simple, should be a feast”.  Interestingly, in a morality-tale sort of way for this post, Gareth is friends with Anissa Helou who has just published the cookery book “Offal: The Fifth Quarter”.  A book I now know I want to buy …

“Il quinto quarto” or ‘fifth quarter’ is a big deal in Roman cuisine.  It relates to all the parts of the butchered animal that richer clients (nobles and clergy mostly) eschewed in days gone by and which the poorer interacted with creatively to churn out some incredibly tasty morsels.  These dishes subsequently came to be enjoyed by all strata of society and have long been thought of as a ‘speciality’.  You can read more about the hallowed regard for offal in Rome in the following post written by Katherine Ayer: http://foodloversodyssey.typepad.com/my_weblog/2010/01/food-in-rome-taste-of-testaccio-is-offal.html

Anyway, back to me and my resolve to cook trippa alla romana for my husband myself.  While buying some at the butcher’s, I asked their advice on how to cook it and and a lady who could be my mother, called Maria (what else!), very kindly intervened too with a few ‘secrets’.  I then telephoned my mother to get her recipe and was flabbergasted to discover that she ‘cheated’: in that she buys tripe that is pre-cooked.  I thus felt very self complacently virtuous as I went about the very long procedure of cooking ‘raw’ trippa.

First of all, I was told to rinse the trippa several times in plenty of cold water.

The butcher had given me cuts from three parts of the tripe … as you can see, they vary in pattern.

Maria at the butcher’s had explained that there were three steps to making trippa alla romana.  The first was to boil it and then throw the water away.  The second was to boil it anew in fresh water coupled with vegetables.  And the last to cook it and flavour it in a tomato sauce.

Boil the tipe in plenty of unslated water for one hour.  Discard the water.  Then rinse the tripe in a tub of cold water with some vinegar in it.  Strain.  (The vinegar in the water was one of Maria’s secrets.)

One celery stick, 1 onion, 1 carrot, a little bit of lemon zest … (the lemon zest is another of Maria’s secrets.)

I then added some pepper corns, juniper berries and cloves.  This was my personal addition! 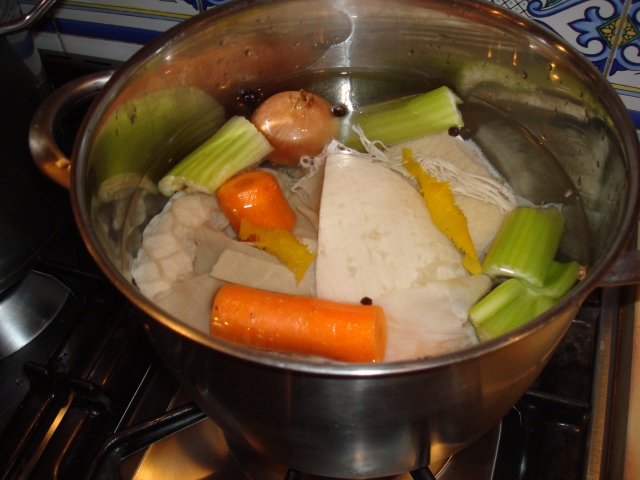 Add water and simmer for one hour.

Remove the tripe and allow to cool.  Remove the vegetables also but keep some of the cooking water.

Cut the tripe into strands.

Sauté an onion in plenty of olive oil … as you can see, I added one solitary pepper corn. 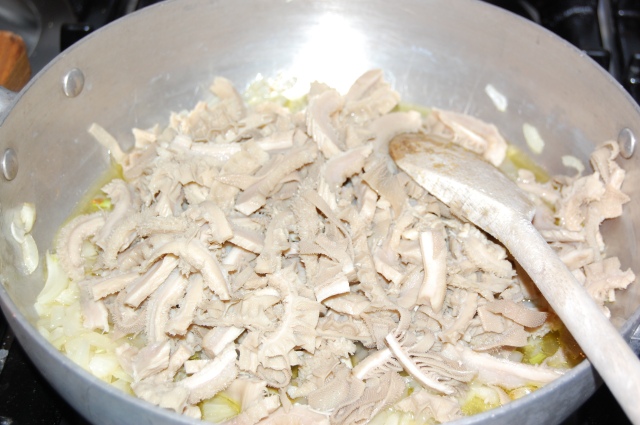 Add the strands of tripe and mix in with the sautéed onion and cook for about two minutes.

I added 1 jar of tomato passata … and mixed it in.

I immediately afterwards added some plum tomatoes too … because I could see that the passata wasn’t going to be enough.  And then added a couple of pinches of dried mint (menta romana).  You can’t get fresh mint this time of year.

I simmered the trippa for one hour with a lid on and on a fairly low heat.  Only once did I have to add some of the cooking water, at which point I tasted the sauce and added salt and some chilli flakes.  At the end of the hour, the trippa still tasted like it could do with a bit more cooking and so I let it simmer for another 15 minutes.

I didn’t have any fresh mint …. so I added a few fresh marjoram leaves and a very small amount of rosemary.  At the very end, I drizzled a little olive oil, mixed well and served it with freshly grated pecorino cheese.

My husband pronounced it very good … but I only believed it when he insisted on eating the leftovers the following night.

It’s a very hearty dish but I wouldn’t say it is overpowering.  Wonderful on a winter’s night.