Fishing for compliments part 1 – a fish salad as a starter

Posted on January 29, 2012 by myhomefoodthatsamore

A few days ago, my husband and I had something cheering to celebrate and, feeling most encouraged by the news we had received, I ventured out to do the shopping for dinner rather more buoyed and upbeat than normal, bearing in mind that it was a Friday, and that Fridays in Italy are traditionally associated with fish.

I went to the fishmonger’s and got there half an hour before closing time …. and hence my choices were somewhat limited.  If the early bird catches the worm, so too does the early shopper catch her choice of fish.  Nothing daunted, clueless as to what menu I would come up with eventually, I took in the prospect in front of me and pointed an eeny-meeny-miney-mo finger at: mussels, squid and Italian cod (very small).  At home I knew had cauliflower, mozzarella, tomatoes, artichokes, tomatoes and a great big leek.

Once home, I got on with it and produced a fish dinner that saw me literally ‘beaming’.  It’s nice to beam now and then, isn’t it!

I am not one to stoop to fishing for compliments.  Fishing for compliments is underhand and sneaky behaviour.  No, when I am very pleased with something I have done, I actively go out of my way asking for compliments!  And I won’t brook anything faint by way of praise — nothing less than generous will do, for I am exuding the kind of joy ascribable to Little Jack Horner when he exclaims “What a good boy am I!” upon pulling out the plum with his thumb.

So … the menu that I devised.  A salad made up of squid and artichokes.   Another one consisting of slices of mozzarella, tomatoes, fish roe and fresh marjoram leaves.  Pasta with mussels and pecorino.  And, last, parcels of cod encased in leek leaves and cooked with cauliflouwer cheese in a saffron sauce.

The artichoke must be peeled and then sliced thinly and put in a bowl containing very cold water and a squeeze of lemon.

While prepping the artichoke, fill a pot with water and turn on the heat to boiling point.

Fill a bowl (I used a heatproof glass oven dish) with cold water and add lots of ice.

Cut the squid into bite-size squares and score the surface in a zig-zag manner with a sharp knife, to create a lattice pattern.

Here is the squid … all cut up and latticed … 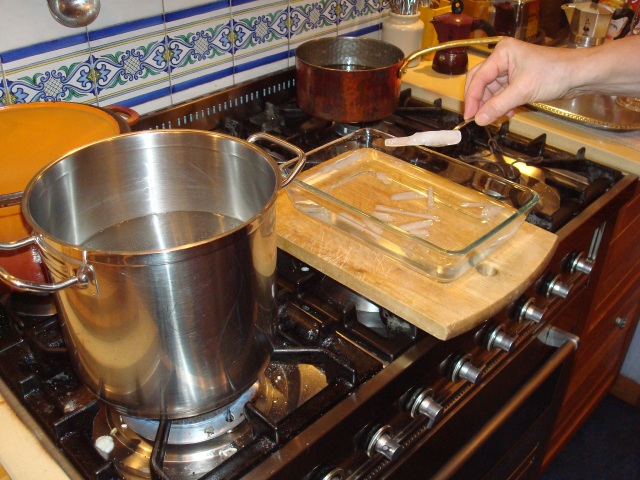 When the water comes to the boil, switch off the heat.  Immediately afterwards, slide the squid into the pot.  And count from 1 to 60.

After 1 minute (more or less) has passed, use a slotted spoon or whatever to remove the squid from the hot water and transfer it to the ice-cold water. 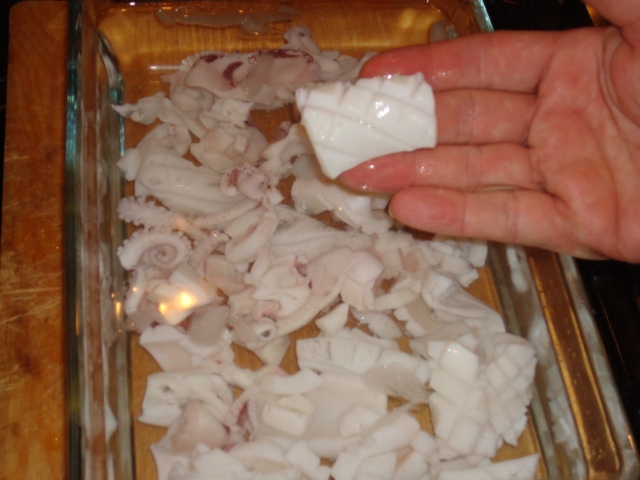 Leave the squid to soak until it is cool.  Look how pretty it looks!  Then drain and set aside.

Put the cooked and cooled squid into a bowl.  Sprinkle a little salt.

Tasty, fresh, pretty to look at, incredibly healthy for all sorts of reasons … people watching their diets will love you for it.  As will those who don’t care one way or another.

Community celebration via food, wine and all beautiful things.
View all posts by myhomefoodthatsamore →
This entry was posted in Fish and seafood, Uncategorized and tagged artichokes, fish starter, salad, squid. Bookmark the permalink.