Posted on October 6, 2011 by myhomefoodthatsamore

Ariccia’s Farmers’ Market had me going there three times over two weekends.  I hope the novelty won’t wear off, especially when the colder or wet weather sets in.  There is just something about a market that awakes an atavistic response to the abundance of food laid out to feast one’s eyes.  So many colourful vegetables! So many cheeses … and honey and jams and bread and olive oil and pulses and bread and cakes and fresh pasta!

These flour-and-water-only pasta strands are known as ‘pici’ in Tuscany.  Here, made in the town of Artena, they are known as ‘gnocchi lunghi’, or long gnocchi … who would have known?  It was still a very hot day that day …. and so I picked a good bunch of basil leaves from my balcony, added grated pecorino and parmesan cheese,  a mashed up clove of garlic, pine kernels and a couple of walnuts, olive oil, salt and pepper, and pulsed them gently in the processor and ….. 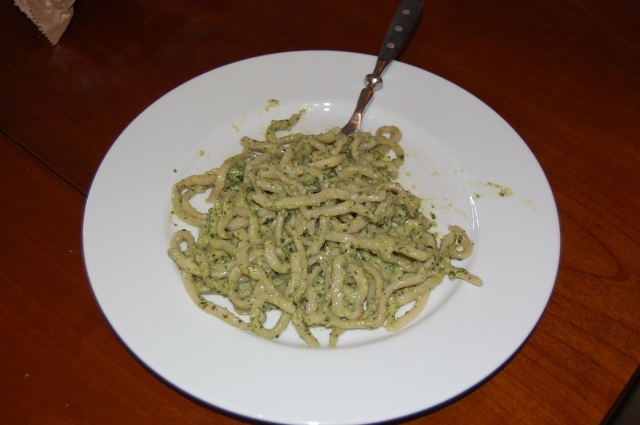 Here is Luciana of “Le Mucche di Luciana” … with her hands milk deep in ricotta-making. 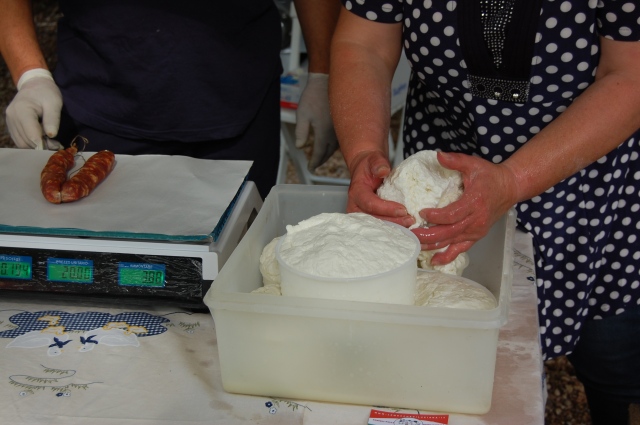 Beniamino, Luciana’s husband, selling sausages on the left … and on the right, Luciana’s freshly made ricotta. 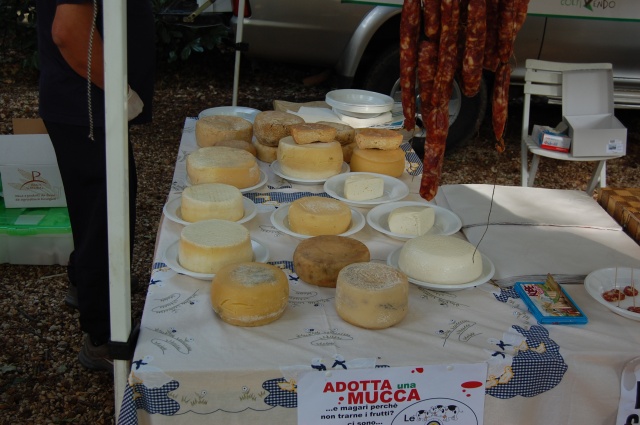 More of their cheeses ….

And I bought some mozzarella …..

A Caprese ‘salad’: buffalo mozzarella sliced up, a splash of olive oil, salt and pepper and a mixture of herbs from the balcony.  The Caprese salad is quintessentially a hight-of-summer dish, no need for cooking, and tomatoes tasting their sweetest best.  Amazing to think one can enjoy a caprese as late as end September/early October … truly an Indian Summer this year.

And here is Miriam of Fratelli Frasca’s “Il Vecchio Ovile” … 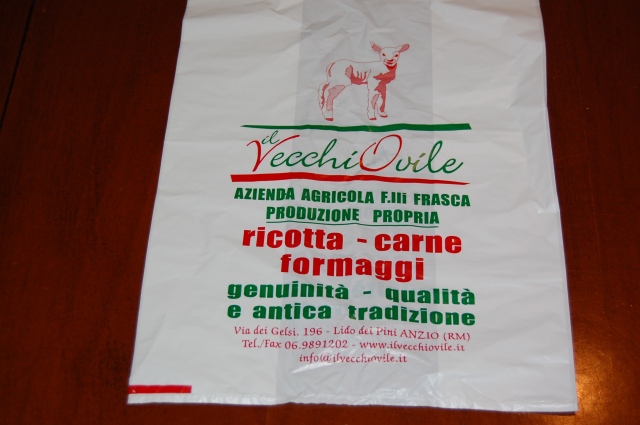 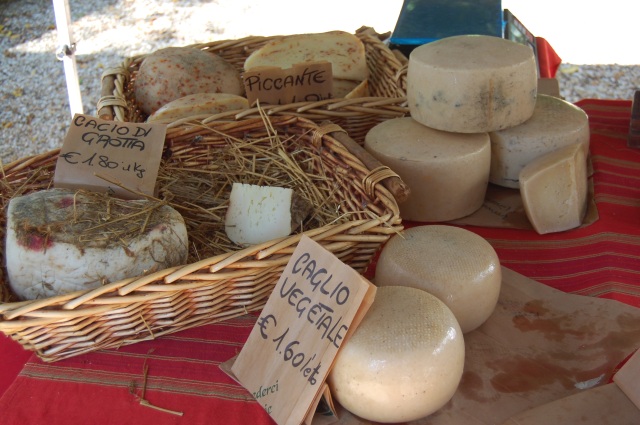 Please note the use of  “Caglio vegetale” — this means they use vegetable rennet, not an unimportant detail in the art of cheese making that is mindful of limiting cruelty to animals.

And here is some of my cheese ‘catch’.  Miriam suggested I try some jam on the more seasoned cheese.  Enter Piera: 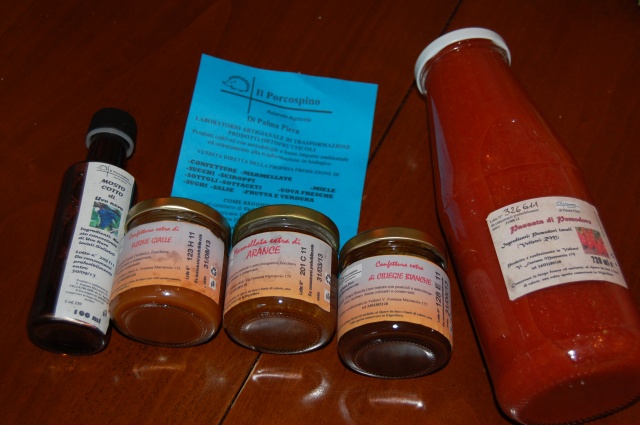 I bought three kinds of jam: orange, white cherry and yellow plum.  I tasted her zucchine jam and would have bought some of that, but she had run out! I also bought some cooked wine must, a syrup that apparently makes a wonderful finishing touch to a tiramisu …. and, on the right, a passata di pomodoro.

And here is Arianna of L’Allegra Pastorella — peeking behind some of her wares.  Arianna was full of tips …. 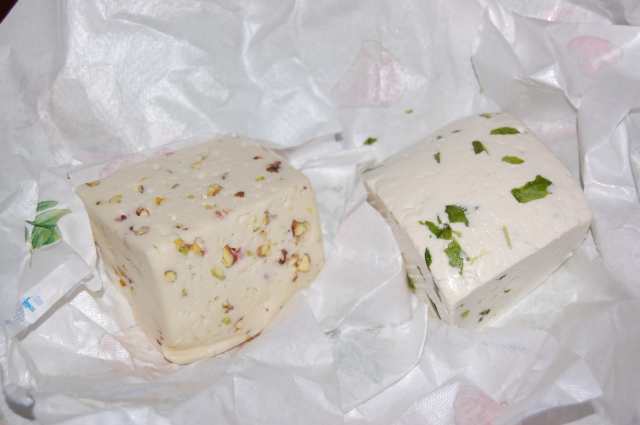 What do you do with a primosale that has pistachios in it, for instance (left in the photo – on the right is primosale with some rocket leaves) ? 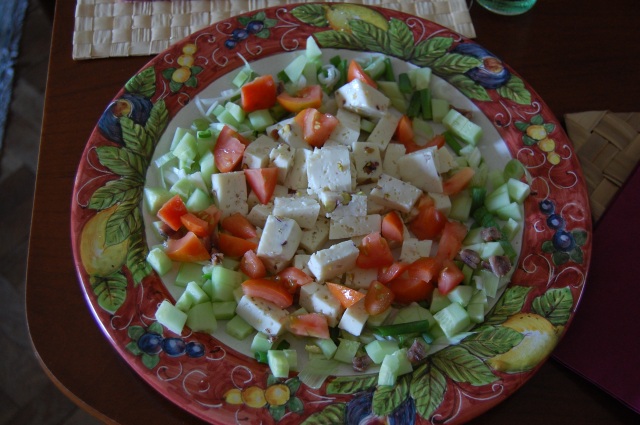 Here is what you do: you chop a few anchovies packed in olive oil,  some cucumber, a tomato, and a spring onion … drizzle the olive oil, salt and pepper and Bob’s your uncle! 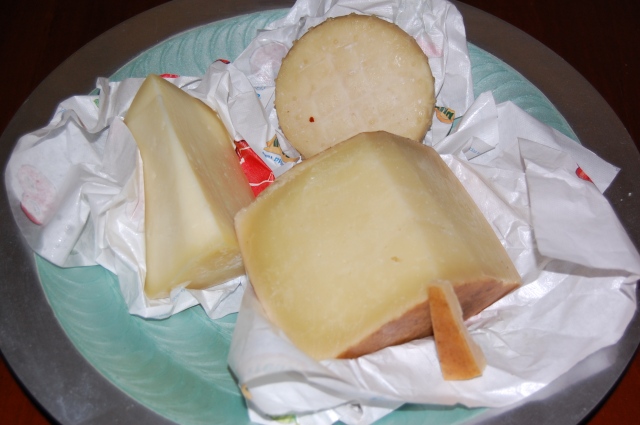 Arianna told us that all of the cheese is edible, including its rind.  “Don’t throw it away!” she admonished.  Keep it and let it harden so that it can be grated and used in soups! I used the fresh pecorino (the round cheese at the top of the photo) to make a ‘sformatino’ of sorts.  I’ll show you in another post.

“Il Re del Pane” – The king of bread …. The town of Artena, just like that of Lariano, is famous for its bread. 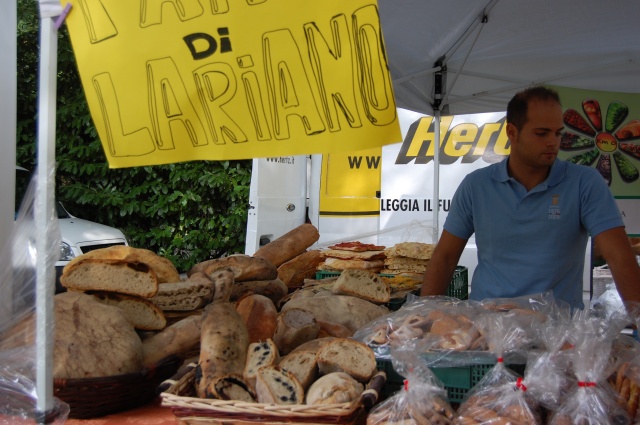 Who was I to resist buying bread?  Bread is cheese’s natural accompaniment.

And, tipping my head to nod at a quote of Keats, what else can I say but “Give me Books, Bread and Cheese, Fruit, Italian Wine, Fine Weather, And a Little Music Out of Doors Played by Somebody I Do Not Know” …. Give me Farmers’ Markets too!

P.S.  For a super blog on Ariccia’s Farmers’ Market, you could read :