Window slats and the naming of a dish: la Parmigiana di Melanzane

Posted on August 27, 2011 by myhomefoodthatsamore

Very Important Post Scriptum to the post I had written below – I am incorrectly placing the PS before the post to  make sure, dear Reader, that you understand just how complex a parmigiana di melanzane can be !!!

When I wrote the post, I had reason to believe that the naming of this dish might have had something to do with window slats.  Which accounts for the title.  However, I subsequently found out the following: The Italian food historian Lejla Mancusi Sorrentino, member of the Accademia Italiana della Cucina, wrote a book published in January 2015 entitled “I Dodici Capolavori della Cucina Napoletana” or The Twelve Chef d’Oeuvres of the Neapolitan Cuisine.  In the chapter on aubergines, on page 167, she explains how during the 1700 and 1800s the kitchen of the ‘Grandi’, i.e. the well-to-do and nobility, who employed professional cooks were in the habit of slicing and then either frying or boiling vegetables and then sprinkling butter and grated parmesan over them before layering them and baking them.  This cooking technique was called ‘al parmigiano’.  So … now we know! The term ‘parmigiana di’ most definitely originated in Naples and window slats had nothing to do with it after all !

But, hopefully, you’ll still enjoy reading the post and learning how to make this exquisite Summer concoction.

Eggplant parmeshan, is how I know North Americans call this dish.  Aubergine Parmigiana is what Jamie Oliver calls it (http://www.jamieoliver.com/recipes/pasta-recipes/melanzane-alla-parmigiana-aubergine), wrongly stating that this dish hails from Northern Italy.  Blasphemy!  This dish is the quintessence of the South!  Originating in all likelihood in and around Naples and descending all the way down to Sicily.  Mention is made of this dish by the cook of Neapolitan nobility Vincenzo Corrado in his book ‘Il Cuoco Galante’ (The Galant Cook) in 1773.

And if it is true that many Italians today resort to grilling the melanzane, which is what Jamie Oliver also advises, a ‘true’ parmigiana di melanzane relies most definitely and uncompromisingly on the F word — frying.

The name of this dish was thought to derive from the use of parmesan cheese (parmigiano) … but since it originated, I repeat, in the South where parmesan would not have been so readily available and where other kinds of cheese would have been used, e.g. caciocavallo, a closer etymological study reveals that its nomenclature had to do, instead, with window slats.  Yes, window slats.

Those wooden forms outside windows to keep out the blinding Mediterranean sun are called ‘le persiane’ in Italian and are made of slats overlapping one another.  And, just like these slats, the slices of fried melanzana are superimposed so that they overlap in the baking dish.   In Sicilian, the Italian word for ‘persiana’ is rendered as ‘parmiciana’, hence and conclusively: parmigiana di melanzana.

Just as the F word is intrinsically linked to this dish, so too was the apogee of seasons to be found at the height of summer, when aubergines were ripe and ready.  It was for this reason that I dubbed an earlier post on this dish “Seasonally incorrect” (1st March 2011) because aubergines would not have normally been available at that time of year (nor basil, another important ingredient, for that matter).  These days, they are.

It’s a dish that one wants to make when the passing of time is of little consequence to the person preparing it, when leisure imbues the atmosphere and thoughts and words are allowed to linger and lounge languidly.  The recipe I prepared in March added beaten eggs … the dish I prepared last July was more pristine and simple in its eloquence.  The former called for dusting the slices with flour before frying them, the latter called for soaking the slices in salted water.   There are several variations on the parmigiana di melanzana theme.

Put the peeled and sliced aubergines into a bowl or tub of cold water with a heaped tablespoon of salt in it and leave them there to soak for about 20 minutes to half an hour. 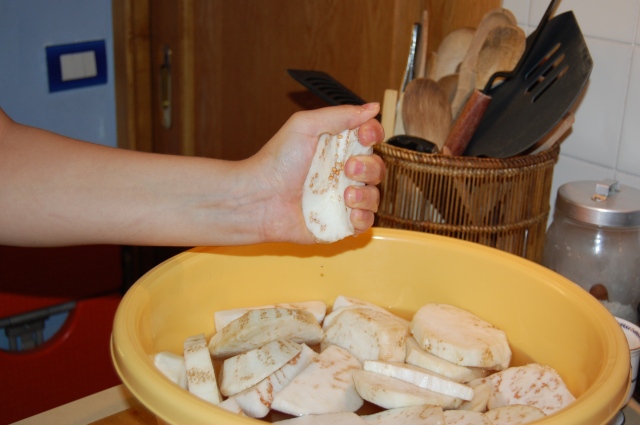 Remove the slices and press and squeeze to get rid of as much as you can.  The whole point of soaking them is to remove any bitterness they might retain (very rare these days to have bitter aubergines but one never knows) and also because this procedure somehow makes the aubergines less liable to soak up a lot of olive oil when it’s time to fry them. 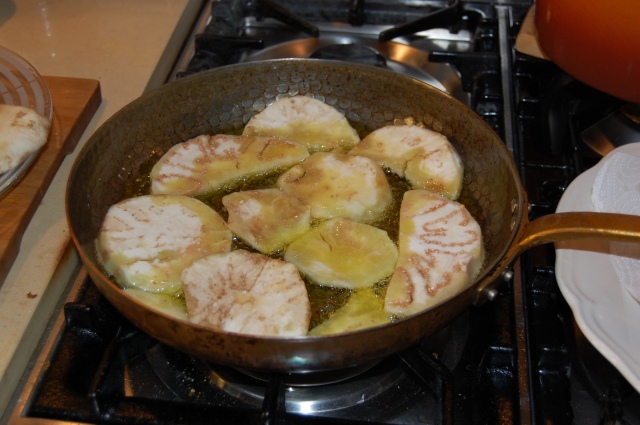 Use only olive oil.  Repeat: only olive oil, no other oil will do.  Use plenty of olive oil and fry the aubergine slices in small batches.  I rather overcrowded them in the frying pan in this photo!  When they are cooked on one side, turn them over and cook on the other side – turn them only once, in other words.

Remove the cooked slices with a slotted spoon and rest them on a plate with kitchen towels or paper to absorve any excess oil (they will invariably be very oily, which is why olive oil is a must).  Please notice that the slices are set so that they do NOT overlap.  These photos might give the impression of frying being an easy-peasy business — which it is, actually. BUT it does take time and patience and a watchful eye.  Phone calls and interruptions are a terrible nuisance when frying.  Frying needs respect — so make sure you can proceed unencumbered. 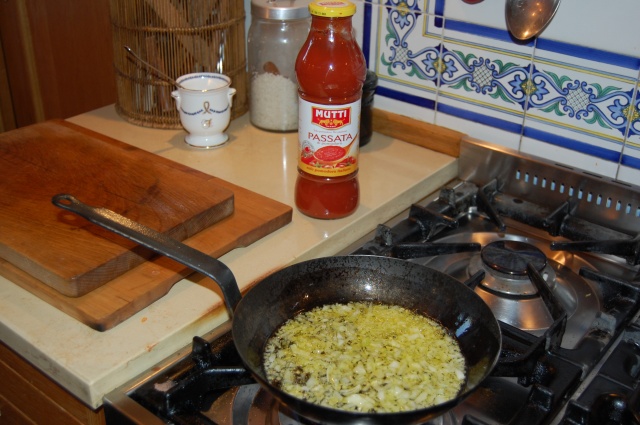 When fresh tomatoes are not available, use a good-quality shop-bought passata.  Sauté some finely chopped (mine isn’t!) onion in plenty of olive oil … make sure it is a golden colour and does not turn brown.

Add the passata and some basil leaves, and add salt and a teensy bit of sugar.  Simmer for about 10-15 minutes.

Time for the Assembly Line

Here is the mozzarella that is going to be used.  Cut it up or tear it and squeeze it well to get rid of any excess liquid that would make the end result a soggy one.

Coat the baking dish with a little bit of olive oil. 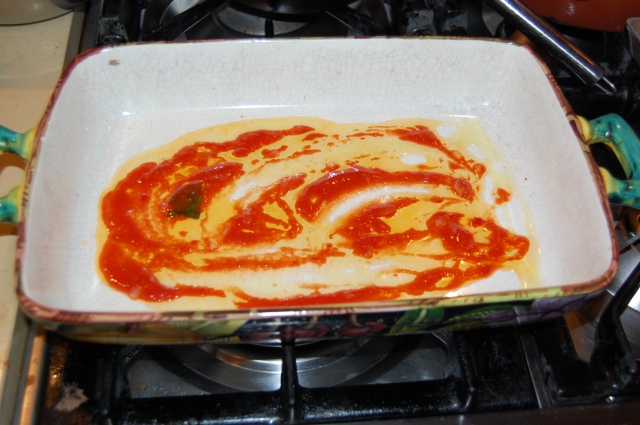 The first layer of slices … 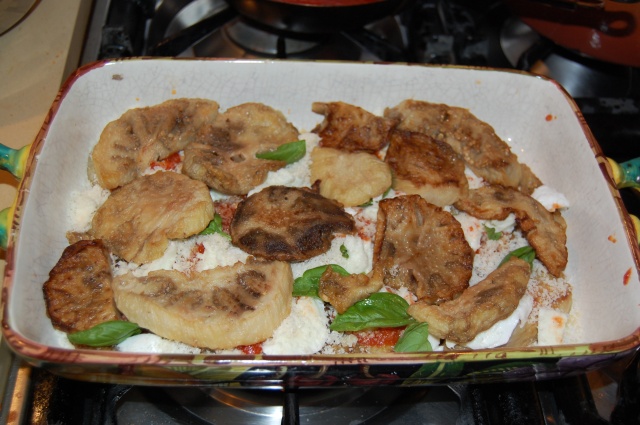 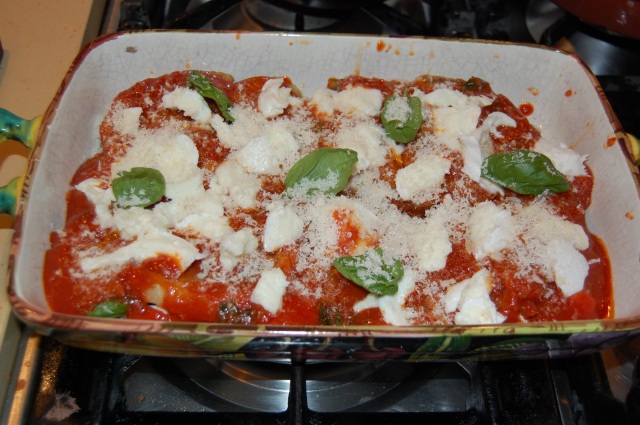 Repeat operation – And now it’s time to cook the dish.  In the preheated oven, for about 40 mintues, at 200°C.

Careful when removing from the oven, as it tends to steam …

The parmigiana di melanzana is not to be eaten hot.  It is best served at room temperature, the different flavours meld better when cooled down.

Eating a parmigiana di melanzana always has a celebratory effect on the diners, maybe because it is redolent of summer and hints at the luxury of laziness in such workaholic times.

4 Responses to Window slats and the naming of a dish: la Parmigiana di Melanzane