Posted on August 3, 2011 by myhomefoodthatsamore

Bountiful Beginner’s Luck thought to reward the modesty in my approach by rendering my very first attempt at traditional, Italian home-made porchetta so successful and satisfying.

The result of my second attempt was even better and tickled me pink!  Ha!  And then, a snake insinuated itself in my cook’s breast … cockiness.  Hubris even.  Yes, I know … hubris.  Dangerous thing, hubris.

We had an oriental pot-luck dinner coming up, you see … and I thought to myself: if porchetta is so easy to make, wouldn’t it be just the height of culinary sleight of hand if I were to season it this time with Thai flavours instead? eh? … And Genius my cooking guardian-angel said: well then, we shall have a Thai porchetta!

I can’t say the result was bad … nor that the porchetta didn’t get eaten (it did).  But the crackling didn’t turn out to be as crisp as I would have liked and the Gods wished to chide me for my hubris by making the preparation and process an exhausting odyssey of details and ingredients. One that I shall not try again for a long, long time!  Was it worth the effort? Yes in the same way as a marathon is worth the effort … 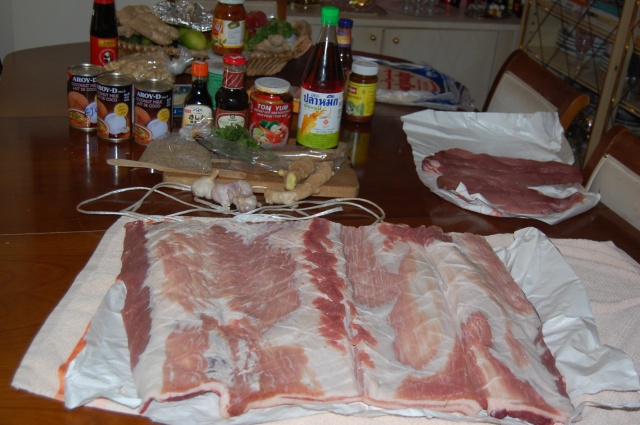 The porchetta ready to be seasoned with garlic, fresh ginger, lemongrass, coriander leaves and more Thai flavours.  The fillet of pork, to be added to the porchetta’s centre, is on the right hand side of the photo. 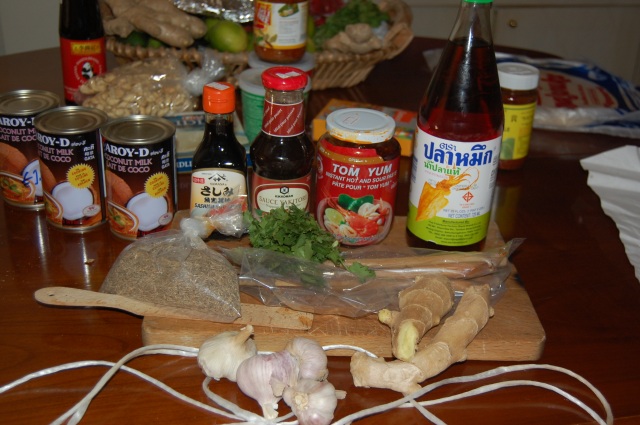 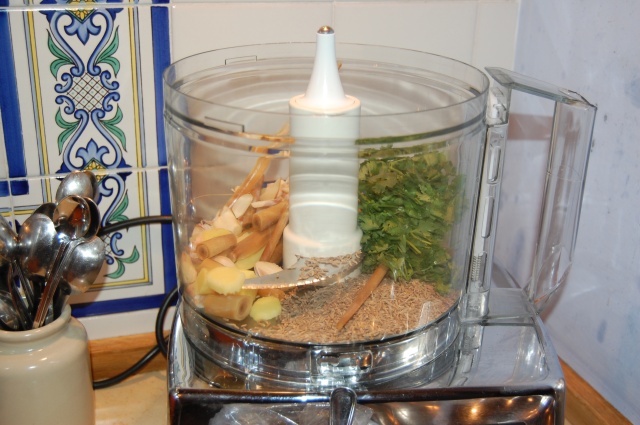 I blitzed the ginger, coriander leaves and coriander seeds and lemon grass to make a paste. 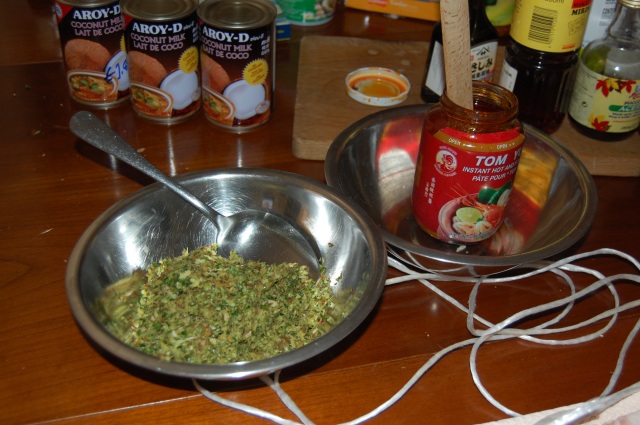 Here is the paste to which I added chopped up frozen kaffir lime leaves and then some tom yum paste. 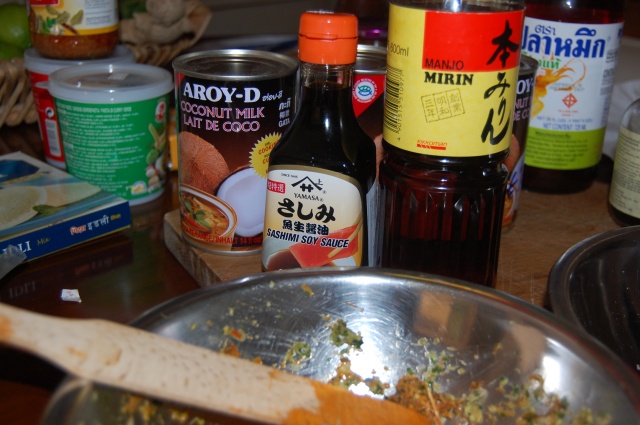 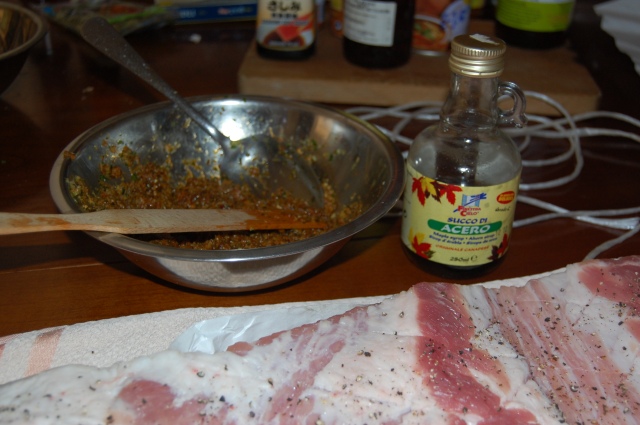 And then, instead of ordinary sugar, I thought I would make use of what was left of a bottle of maple syrup.  I did sprinkle some salt and pepper over the porchetta, however. 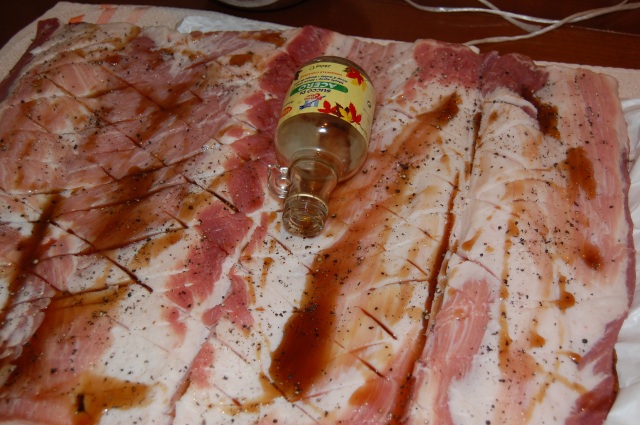 Then I added the maple syrup and massaged it into the scored flesh of the porchetta. 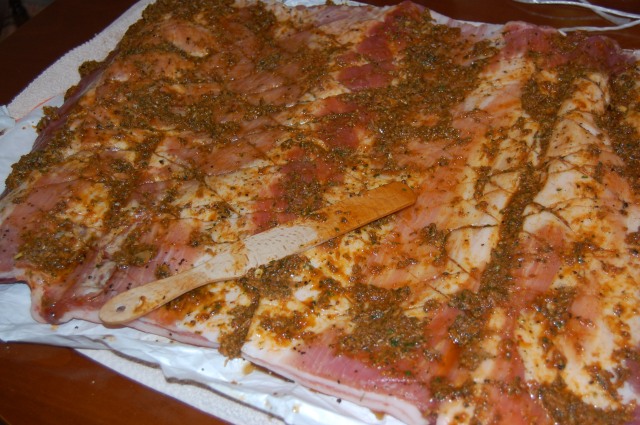 Then I spread some of the paste onto the porchetta, as evenly as I could.  Only now did I place the fillet of pork at the centre of the meat (see next photo). 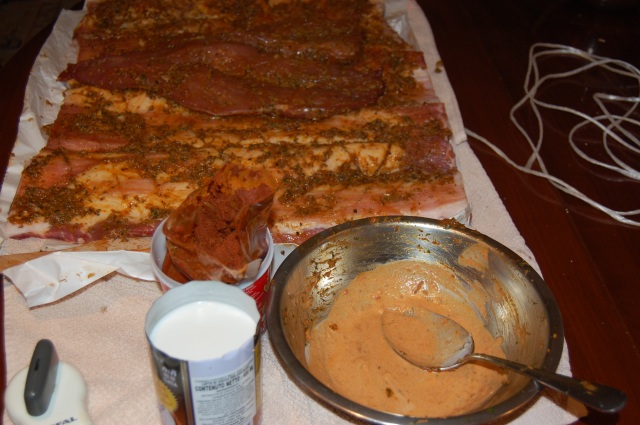 I added a little coconut milk to the paste, to eke it out more.  And added a bit of red curry paste to give it a bit of spice.  I couldn’t make the thai porchetta too ‘hot’ because I knew that some of the dinner guests just wouldn’t be able to handle that level of chilli. 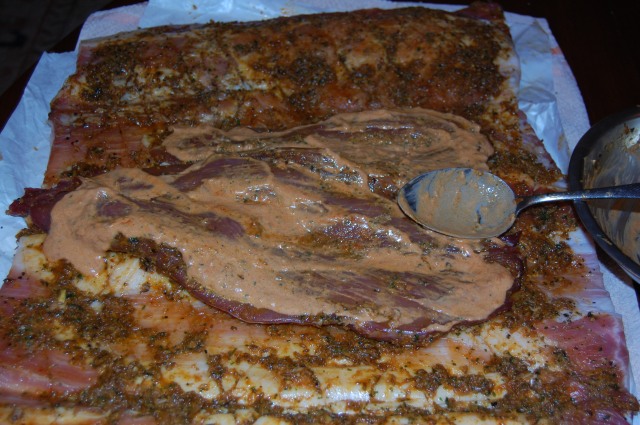 Here I am spreading the coconut milk with what was left of the paste and some red curry paste. 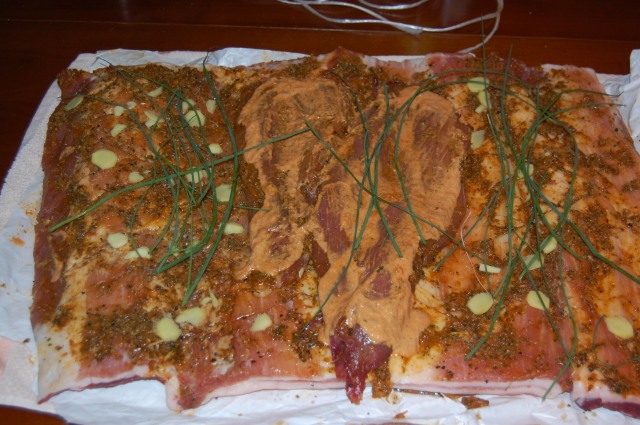 And now come the pearls of sliced garlic cloves … and the strands of chives.

TIME TO WRAP AND ROLL 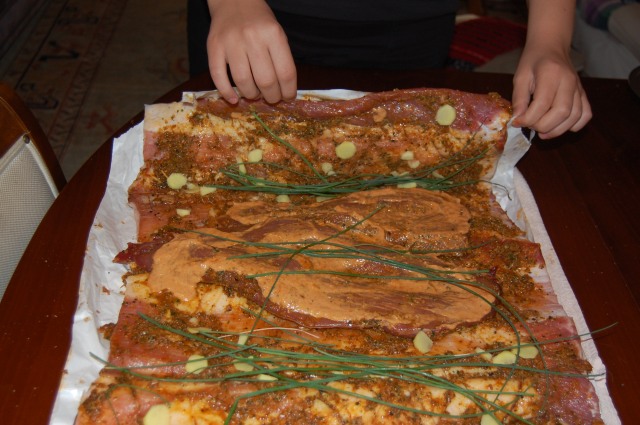 First one end, as a flap … The fillet of pork stays in the middle. 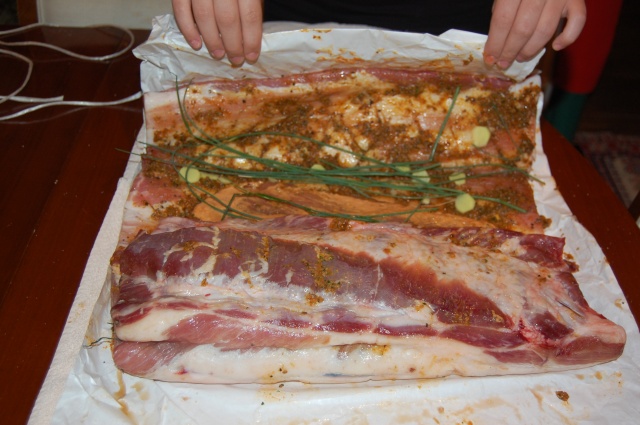 Then the other end … 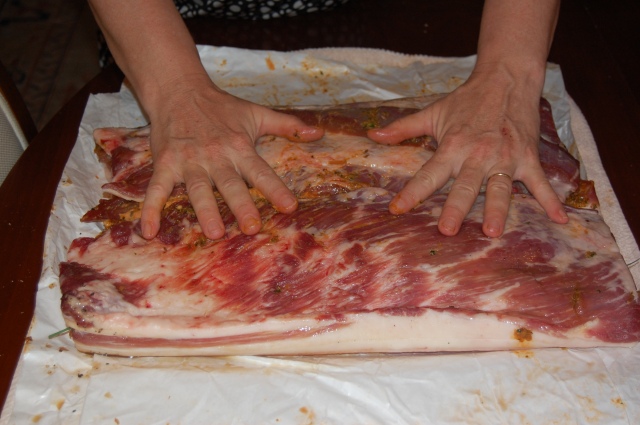 Already, at this stage, I was tired out and berating myself for my hubris.  why? why oh why did I think this was going to be a cinch?  I was ready to run away and have a sauna followed by a soothing massage. 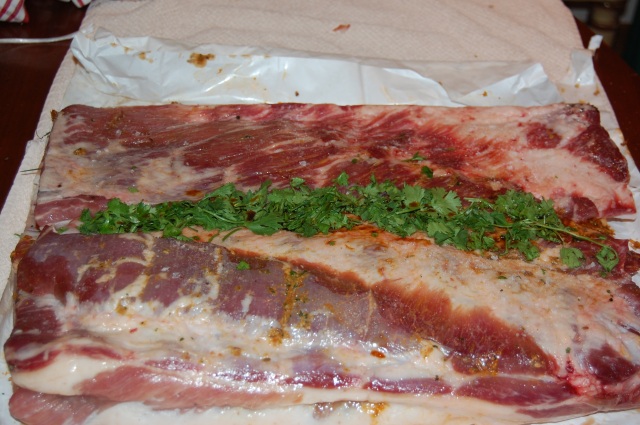 Where the two ‘flaps’ of meat met at the centre, i.e. over the fillet, is where I thought a line of fresh coriander would look … and then taste … good. 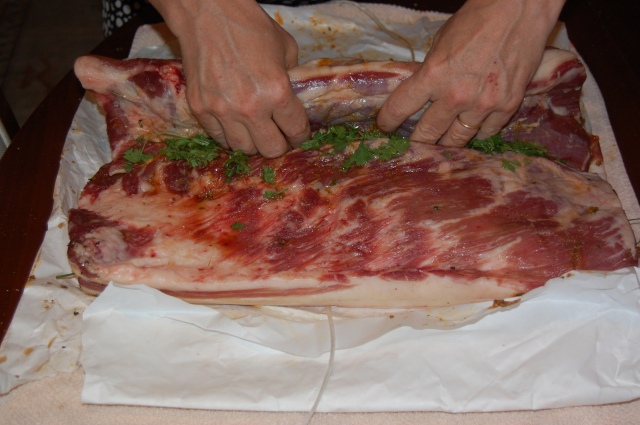 And now the whole thing needed to be rolled and I was ready to burst into tears.  Thank goodness sweet daughter was around to bolster me on with my bolster of pork.  It squelched and it slipped from my fingers forcing me to start all over again many times, and it took bloody ages and I have strong hands but not strong enough for this kind of work … 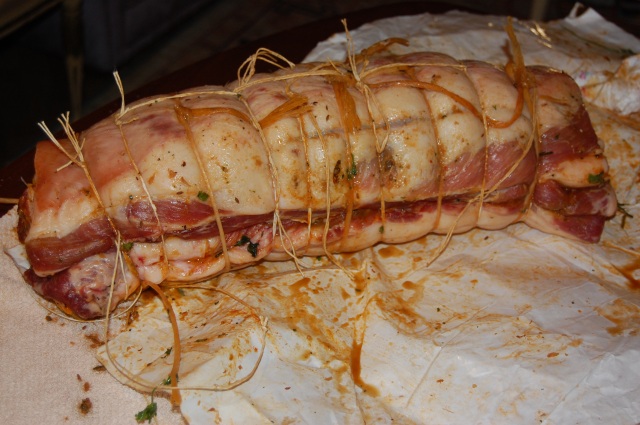 This was a huge piece of meat to turn into a bolster shape … and the butcher’s string wasn’t enough so I had to make do with the home-made kind which is thinner … and this is the end result.  Very unsightly.  Not as unsightly as I was to behold by this time.  I gave up smoking many years ago and this was the first time in a long long time that I longed for a cigarette! 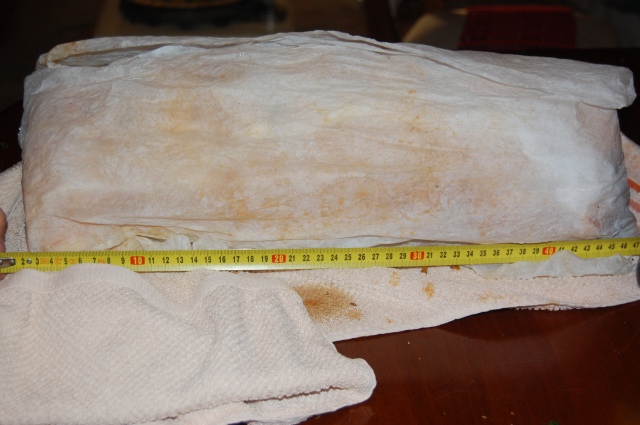 The beast was wrapped in parchment paper … all 50cm of it! 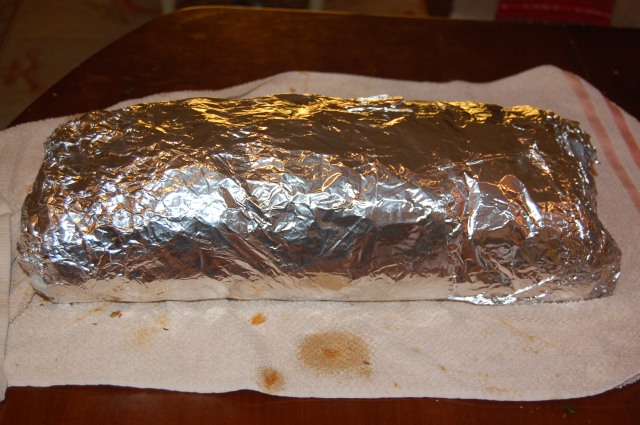 Then wrapped in aluminium foil.  Honest to goodness … the dead pharoahs in ancient Egypt got as much pampering as this thai porchetta.

COOKING THE THAI PORCHETTA ROUND 1 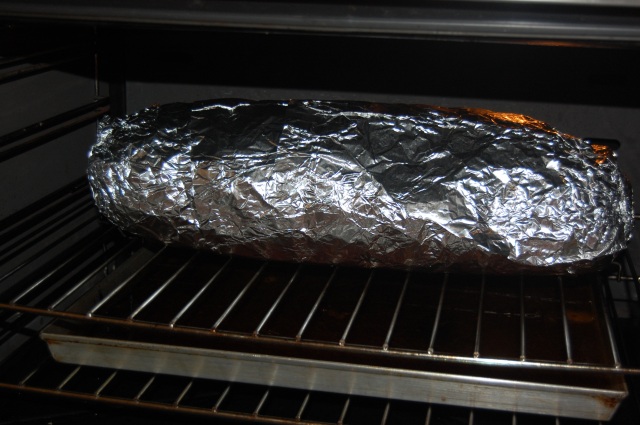 In a hot oven for two and a half hours at 220°C.  Just as well I placed a large baking tray underneath it … it soon started oozing some of the seasoning.  The scent wafting about in the kitchen was enticing I have to say … 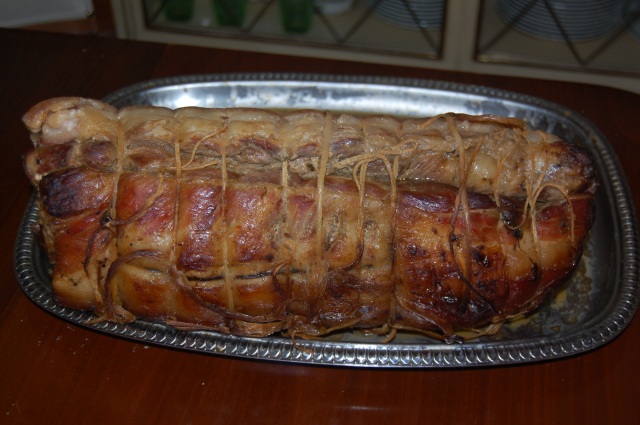 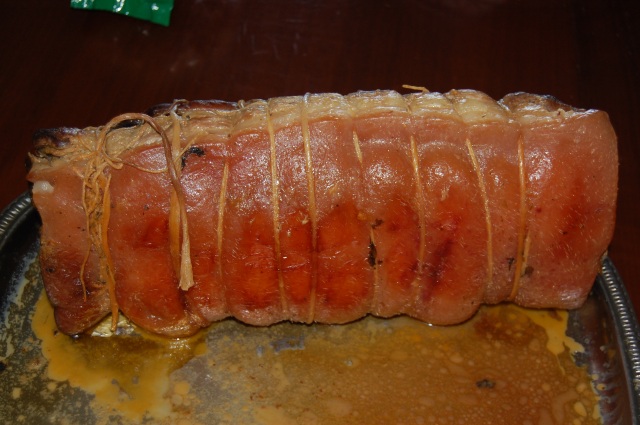 You can see how the seasoning continued to ooze away from the porchetta.  I had to wait for it to cool down a little before putting it back in the oven … for one more hour.  As you may notice, the fat on the porchetta is still slightly gelatinous … it did not get very crispy.

COOKING THE THAI PORCHETTA ROUND 2 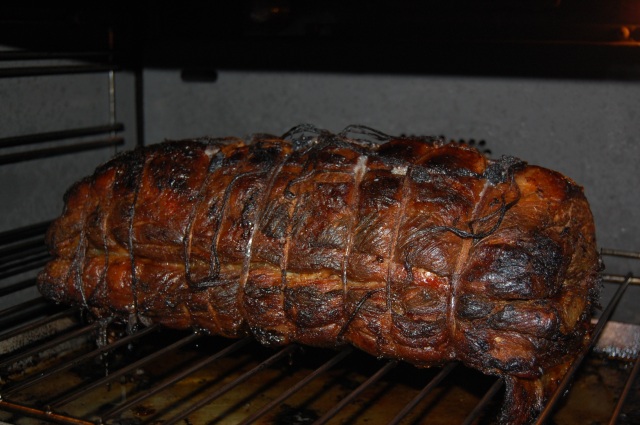 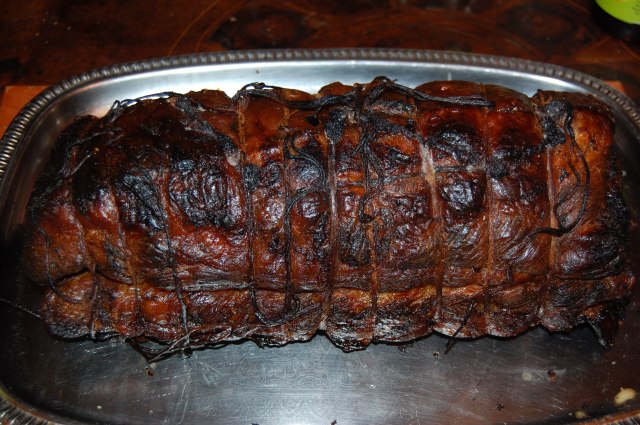 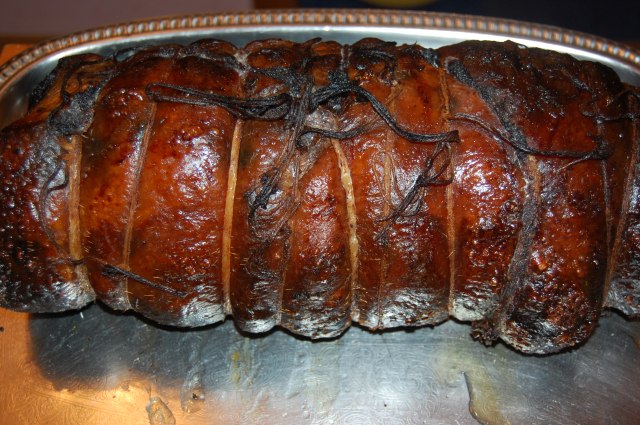 And the fat did crisp up even though not as much as I would have liked.  I think that next time (you see? I’m mad for even thinking of a next time!) I shall make the seasoning a lot drier …

Anyway, I managed to transport the thai porchetta to my friend’s house where the party was to be held and people did like it and eat it. Phew!  I asked for some leftovers to take home and the following are a few photographs of what was left the following day. 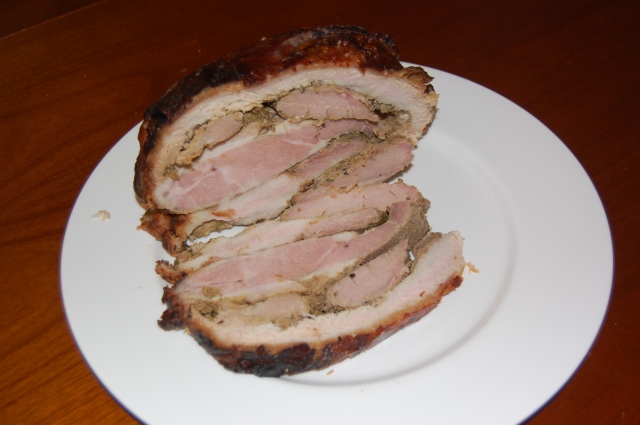 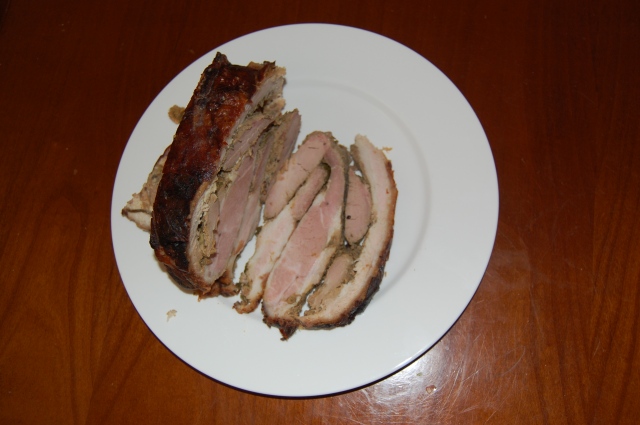 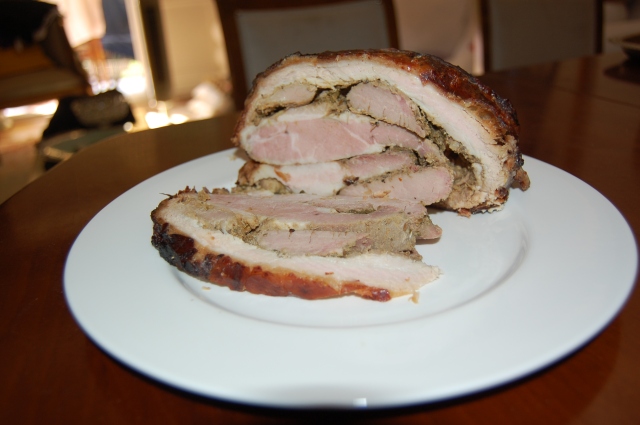