(4) How to make Tabbouleh (for a Lebanese dinner)

Posted on June 26, 2011 by myhomefoodthatsamore

Saying that tabbouleh is a ‘salad’ is like saying that ice-cream is frozen milk, eggs and sugar … everything about tabbouleh is special and it has to be lovingly made.  Its colour is red (tomatoes), white (bulgur) and green (parsley and mint) and the parsley is the dominant ingredient in this ensemble.  It is most refreshing and satisfyingly tasty at the same time — plus it is incredibly healthy.  I get the idea that too many of us do not appreciate how healthy parsley really is (www.whfoods.com/genpage.php?tname=foodspice&dbid=100).

Rinse the bulgur under running water and then place in a bowl.  Pour hot water over the burgul and let it absorb it (enough water to cover it).  This can take up to 20 minutes.  (N.B. I have read that lemon juice can be added to the water but I have never tried this.)

We don’t want ‘soggy’ bulgur … so after 20 minutes or so have passed, drain it to get rid of any excess liquid.  Set aside.

Squeeze the juice of two lemons and set aside.  I peeled the zest of the lemons before squeezing them — that’s because I store them in the freezer for use in other recipes.

Cleaning the parsley and the mint.  After being washed, they must be dried very very carefully before the leaves are plucked from the stems.  On the left is what gets discarded. On the right, we have the parsley at the top of the photo and the mint on the bottom.  There should be, say, 4 parts of parsley to 1 of mint. 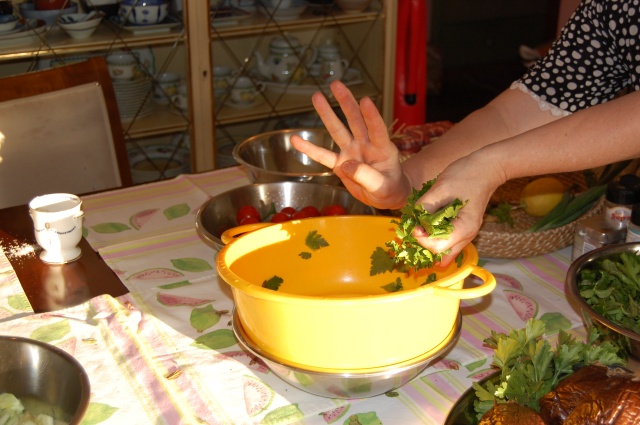 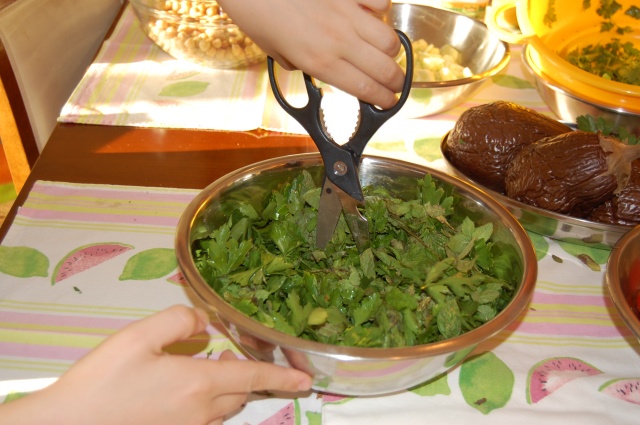 The leaves can be cut with a sharp knife, they can even be processed on a pulse with a food processor but the latter is risky because the leaves can easily get bruised and the result is soggy and unpleasant.  So I find the best way is to painstakingly and patiently cut the leaves with a pair of scissors.  And yes, it does take time.

The spring onions are also chopped.  We can start assembling the salad.

Place the parsley and mint in a large bowl. 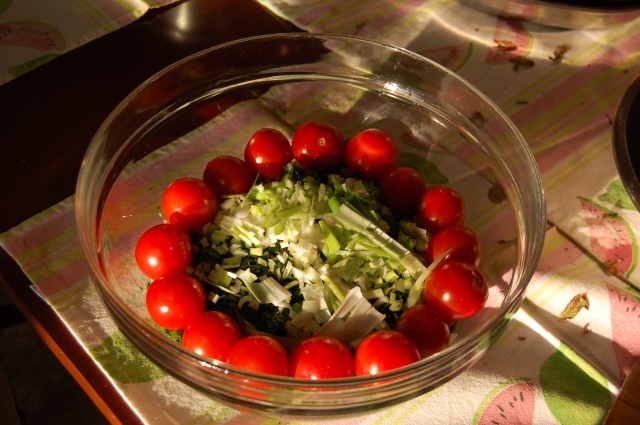 I put the tomatoes like that in the bowl to show how many are needed, more or less.  They need to be chopped too. 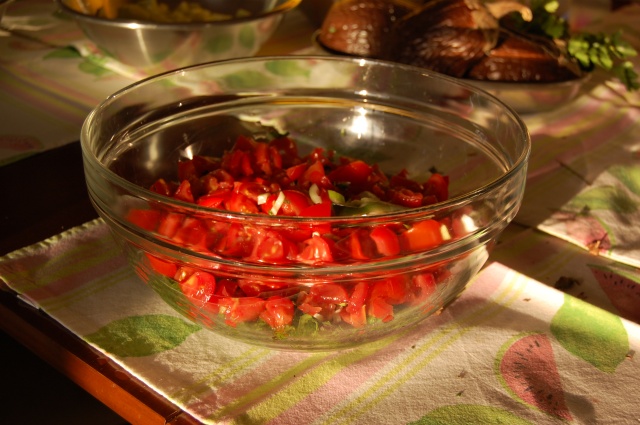 Here they are, chopped.

Add the chopped tomatoes to the rest of the salad. 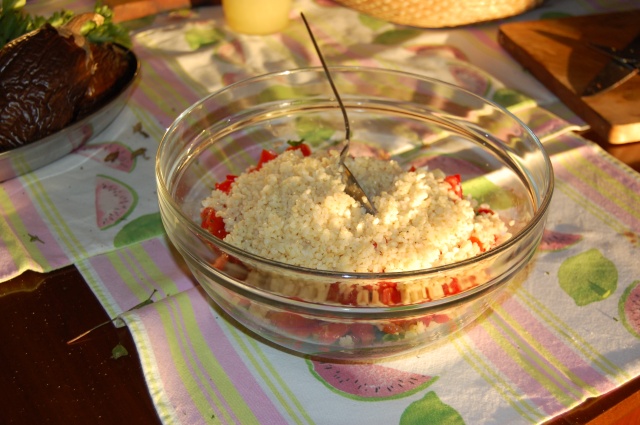 I added 4 tablespoons of bulgur. 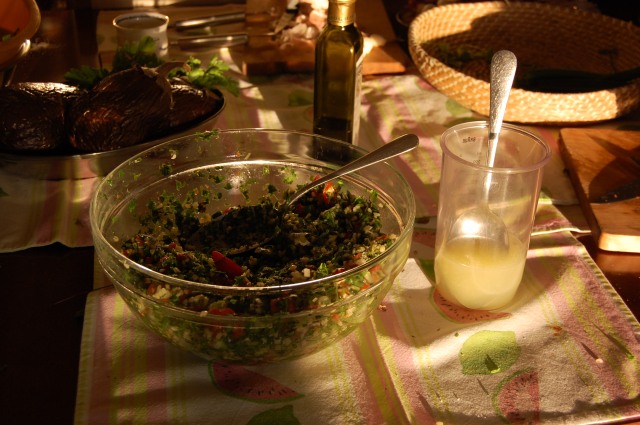 Add the lemon juice.  Add half at first and taste and see if you like it.  Add more, if you think it requires it.

Add plenty of salt (remember salt is a flavour enhancer) and freshly milled pepper.  Mix well and give it a final taste.  Store in the fridge if you are going to serve it later.  If you want to prepare it the day before, then prepare the tabbouleh step by step as shown … but don’t add the chopped tomatoes and lemon juice until the following day.

The King of salads: tabbouleh!

A couple of years after writing the above post and I came across a recipe that merits attention regarding the making of a ‘proper’ tabbouleh.  It would seem that my version needed tweaking on two accounts: a) I had added a little too much bulgur to my salad in terms of proportion (see above) and b) soaking the bulgur in boiling water was a no-no because doing so detracts from the texture.  In my defence, however, I have to say that the bulgur I used did not go at all mushy despite the hot water treatment (possibly on account of the brand I used and the fact that it was organic etc.).