Posted on June 12, 2011 by myhomefoodthatsamore

Protein is good for you and eggs are a wonderful source … especially the egg yolk.  A high temperature will compromise the egg yolk’s goodness (i.e. the less you cook the egg yolk, the better) … whereas the white of an egg is better eaten cooked (raw egg white not good for you).

Pecorino cheese … Pecorino Romano … is very good for one’s health because it comes from sheep (ewes) that get to eat grass.  See the following links if you are interested:

Pasta.  Pasta is a mood enhancing food because it helps to increase levels of the essential amino acid tryptophan … which in turn plays such an important role in the production of serotonin and melatonin.  All this to say that: pasta makes you happy (unless you are celiac – but that is another issue).

When things were very tough, nutritionally, for the poorest of the poor at the end of the 19th and the beginning of the 20th centuries in Italy, peasants who had access to pasta in the South of Italy did not suffer from Pelagra as did the peasants of the North — whose staple diet was polenta (maize).  Detractors of the healthy properties of pasta probably make very good points that should be taken into consideration, I won’t say no but …. but … but I remain unconvinced.  There are too many slim and healthy people in Italy who eat pasta on a daily basis.  And besides, demonising any single food never seems an intelligent way to tackle good nutrition.

I think that a Carbonara pasta dish is very enjoyable and healthy for the above three reasons.   It may not be the choice of pasta when you are on a diet, true, but then anything rich and satisfying is going to have that ‘mmmm naughty but nice’ feeling when you tuck into it.  Today, it just seemed perfect for our Sunday lunch.

This can be quite a quick recipe to prepare if one is disciplined about it.  (Discipline is such a nasty word, I know, but it can be helpful in cutting down preparation time!  What it means is : think out what you need to do in advance, step 1, step 2, step 3 sort of thing … see it in your mind’s eye and then quick-as-a-flash you know exactly what to do!) 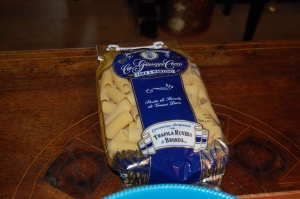 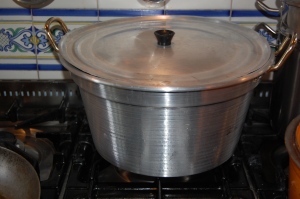 Put the water on the boil … cover with a lid so that it will take less time to boil.  Add coarse sea salt only when it does start to boil.

Here is the guanciale (pork jowl). 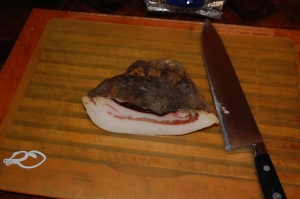 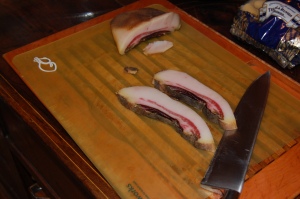 I cut two thick slices which looked like they were going to be enough for our needs today.  I weighed them and they weighed 135g.  However, by the time I got rid of some of of the fat, we probably knocked the weight down to 100g.  The amount of guanciale is a question of personal taste … add more if you prefer. 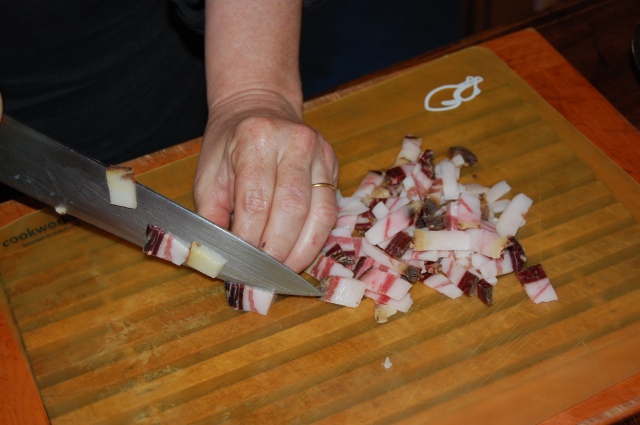 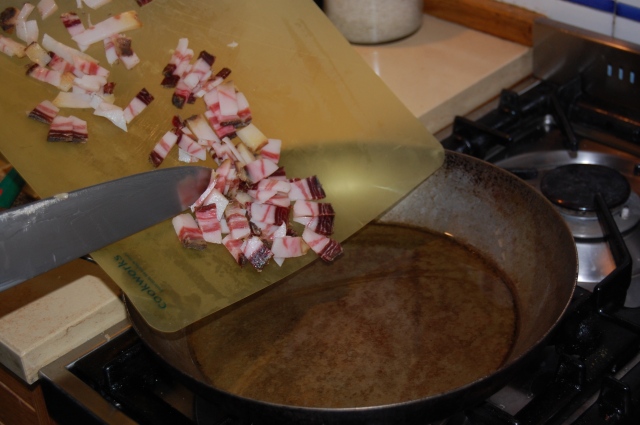 Add it to the pan containing some olive oil and cook until crisp. Do, however, cook it over a very low heat.  You don’t want to burn the guanciale otherwise it will leave a bitter aftertaste. 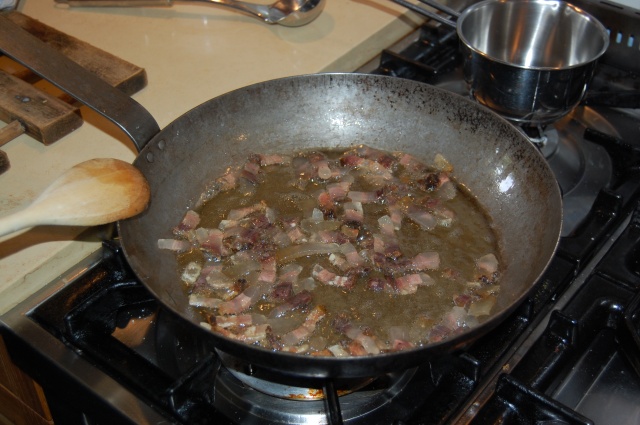 When you are satisfied with how it looks, switch of the heat and set aside. 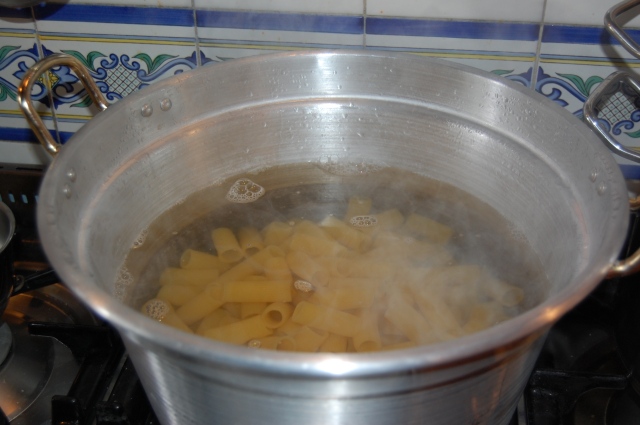 Now you can start cooking the pasta: when the water reaches boiling point, add the salt and then add the pasta.  Now is the time to be ‘disciplined’ and keep an eye on  the clock.  There is nothing worse than overcooked pasta.  It has to be just right: al dente. (Check the cooking time on the packet). 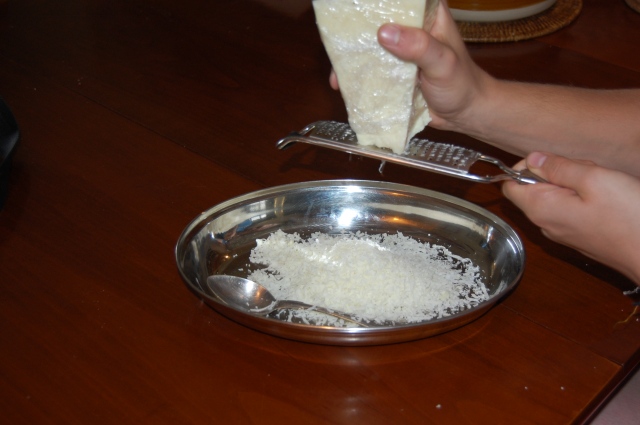 Grate some pecorino cheese.  My rule of thumb is 3 spoonfuls per person or 3 spoonfuls per 100g of pasta — hence, 15 spoonfuls for 500g pasta serving.  Again, the amount of cheese is a question of taste … but it must be said that a good carbonara requires a lot — -and I mean a lot — of pecorino.  Don’t bother otherwise …

And now for the eggs which should, preferably, be room at temperature. 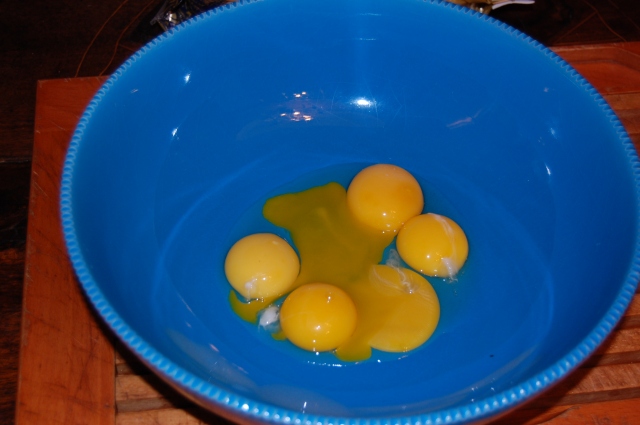 Crack the eggs and separate the yolks from the whites.  Very important: this is the bowl in which the pasta is going to be served and it is vital that the size of the bowl be large enough to contain all the pasta —otherwise you get into trouble.  The final part of this recipe requires a lot of mixing with a wooden spoon, and so, if the bowl isn’t large enough, it makes it very difficult to do and you end up with a mess. 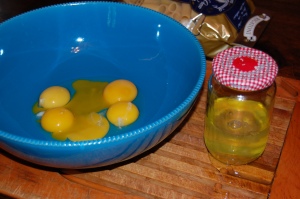 And don’t worry about ‘wasting’ the egg whites: if you put them into a glass jar, you can use them for something else.  Or you can freeze them and make meringues one day. 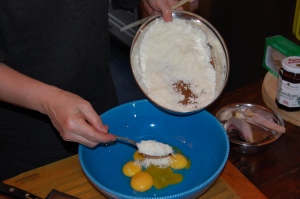 And now the mixing begins.  Pour most of the grated pecorino into the bowl with the egg yolks.  Save some of the pecorino for when you serve it — someone might like a little bit more on their plate. 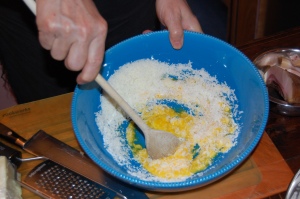 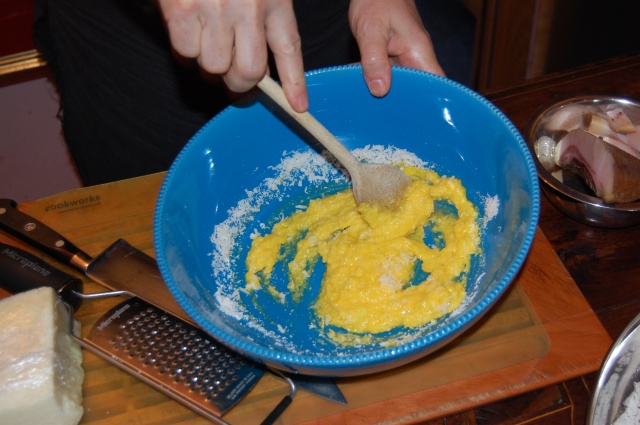 As you can see, you will end up with a somewhat thick consistency, akin to very runny scrambled eggs. 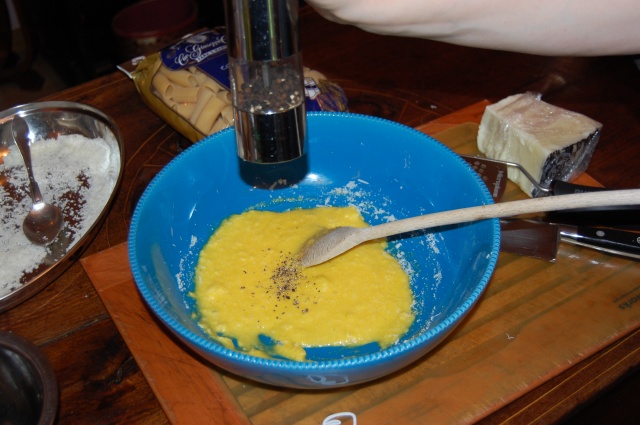 Sprinkle some freshly milled pepper.  I love the stuff but not everyone does, so I tend to go easy at first … people can add more if they want later on, on their own plate. 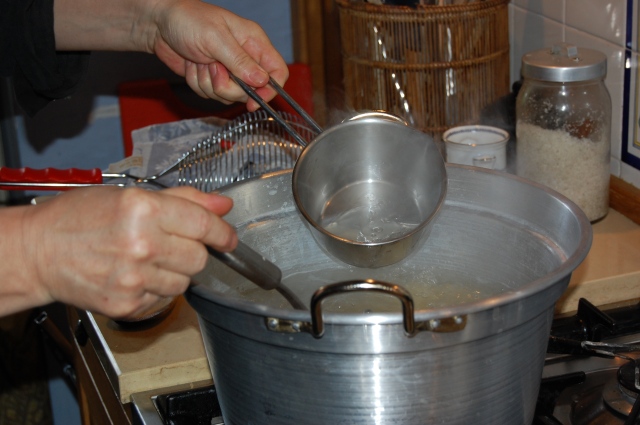 The pasta has been boiling away for a good 6 minutes now and I take some of the water it is cooking in and set it aside.  I will need it to finish the dish at the end.

And now, dear Reader, I ask for some clemence …. this is what befalls the ardent cook who can’t find her camera in time to ‘snap’ the pasta being drained.  It was a case of either looking for the camera or ruining the pasta: so naturally I opted for saving our lunch.  I do apologise and it is such a shame that this dearth of photographs should coincide with a very important part of the recipe.  Please use your imagination.  I will try and make the written instructions as clear as I can.

Okay … so when the pasta is ready, drain it.

Then put it back into the saucepan with the cooked guanciale in it. Turn the heat on and mix with a wooden spoon so that the cooked pasta absorbs as much of the oily deliciousness as it can.  And all this must be done fairly quickly … we are talking about 2 minutes roughly.  Remove the saucepan from the heat and now … you can put the pasta into the bowl containing the egg yolks and pecorino. 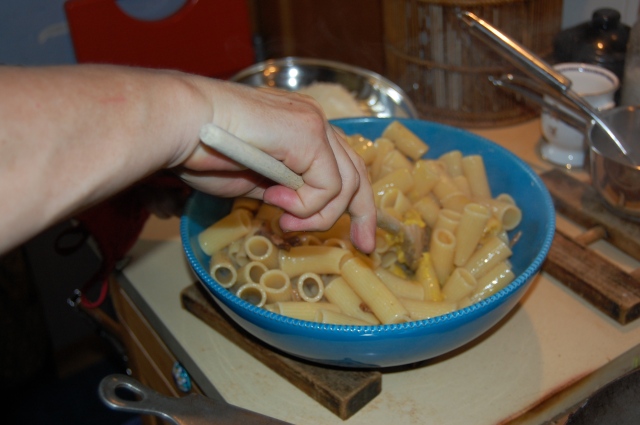 I found my camera at this stage, thank goodness.

Put the wooden spoon in the middle of the bowl and start rotating it from the bottom towards the surface.  You can turn the bowl around with your left hand, and use your right hand to mix in the carbonara sauce.  As you can see, it is very thick at first.  Don’t worry, take your time. 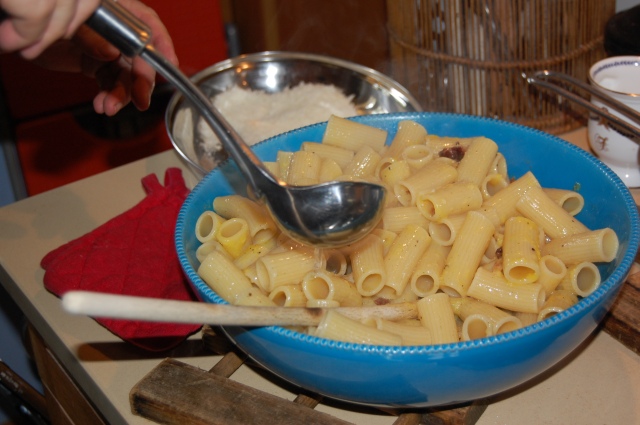 Add some of the cooking water (which is still piping hot by the way).  Mix some more.  The sauce immediately takes on a creamy consistency now. 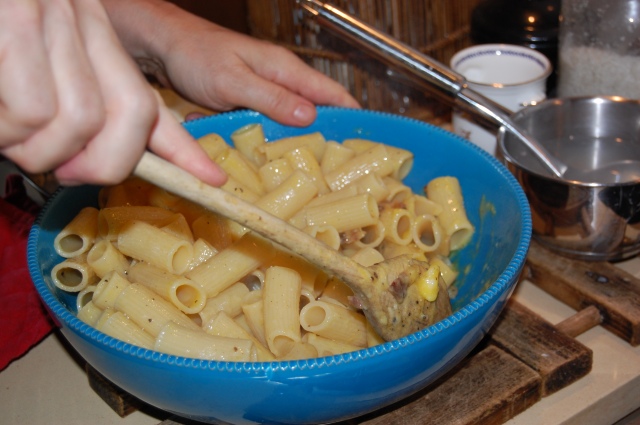 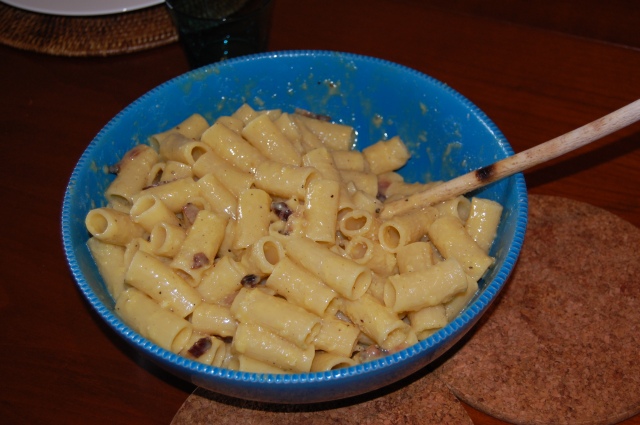 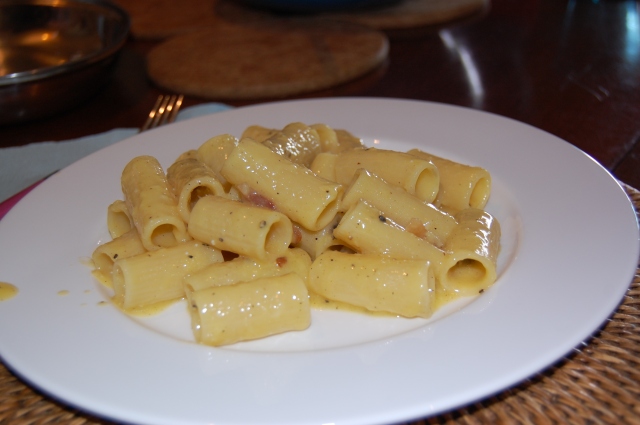 P.S.  No cream, please — there is no need.  You will get a ‘creamy’ carbonara just using these ingredients!

1 Response to Carbonara for Sunday lunch