Ushering in the New Chinese year of the Rabbit

Posted on February 20, 2011 by myhomefoodthatsamore

Life is what it is, and ‘It’ is what it is, and there is always much to learn and be grateful for and last year was indeed, from many a point of view, a very important one for me and for some of my friends and loved ones.  Such ‘importance’ came all too often, however, at the price of feeling that one was walking uphill all the time without a plateau in sight and it got to the point where, speaking for myself at least, I was really quite glad to see the back of 2010, the year of the Tiger.  I was born during the year of the Monkey, you see, and these two animals are zodiacal opposites and don’t exactly hit it off.  So though I revelled in seeing the new 2011 year in on 31st December, I was looking forward even more to seeing the old Chinese year out on Wednesday 3rd February.

I happened to be in London at the time, staying with my daughter, in the lovely snug-as-a-bug mini studio flat where she is living momentarily and we got very excited about organising a bijou celebration including us, my son, my sister and a friend from boarding school days.  Except for my son who sleeps at his university’s halls of residence, the four of us knew that our sleeping accommodation was going to be very much of school dormitory style: all of us on the floor, in a row, three of us on futons on the floor and my daughter on a blow-up bed.  Upmarket camping you might call it.

I am far from being an expert on Chinese food and the menu I came up with was perforce more a reflection of the essence of Chinese cuisine than anything authentic.  We went to Chinatown in Soho and picked up a few decorations and a dessert called Dragon’s Beard and all was hunky dory until it got to the actual act of cooking.

My own galley kitchen is tiny and I am used to dealing with limited space, thus ‘Beautiful Catastrophe’ number one was not so much the doll’s size of  my daughter’s kitchenette, nor even the thoroughly un-ergonomic way it was set up (whoever thought it up is seriously dysfunctional) take a look:

It was, rather, the HUGE challenge, for me at least, of the stove being an electric one.  I just don’t know how people do it in Britain (and other countries that don’t rely on real fire, real flames)!  I am so used to a gas flame that is easy to control and those nasty electric burners continued to mock me till the very end, upsetting anything I tried to cook and leading me to burn too many dishes.  I might even write a post about the cultural/practical effect of electric burners on meals … the way I see it, for instance, Italian dishes are really difficult to cook with an electric stove.  Okay, enough remonstrating, I was just pointing out the beautiful catastrophe of it all ….

Chicken corn soup for all of us, then spare ribs for my son and my friend who do not eat fish, steamed salmon and sea bream for the rest of us who do, and stir fry duck breast and various vegetables and rice for all of us.  I was feeling quite pleased with myself until my sister reproached me for not remembering that, actually, it is sea food she likes (cuttle fish, prawns, scallops, squid, etc.), not ‘fish’ fish, so she partook of the spare ribs too and only condescended to taste the sea bream and salmon dish because she wanted to underline her forbearance (you see what I am up against!).

We chose red flowers because we love them anyway and because red is a very auspicious colour.

Here is a closer look at the ingredients: 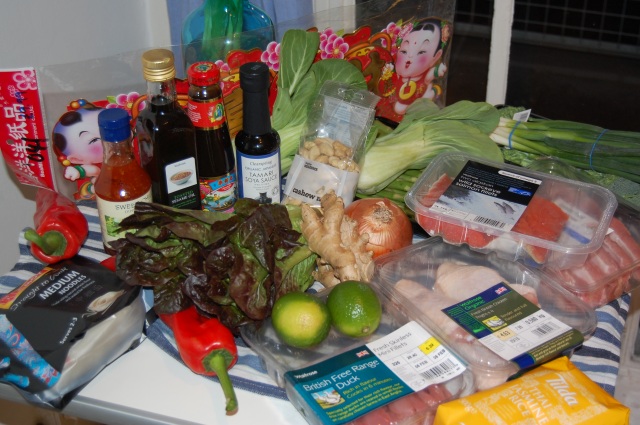 The only thing missing is the sea bream which was in the fridge. 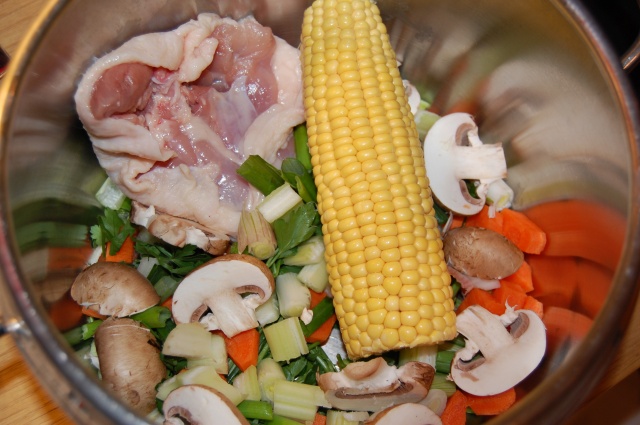 I made the chicken soup the day before.  Chicken, carrot, celery, a few mushrooms, parsley stalks, spring onion, pepper corns, and corn of course.  I used a pressure cooker and added some noodles just before serving it on the night.

The day before I also marinated the spare ribs with oyster sauce and tamari sauce and the duck breast fillets with hoisin sauce and some sesame oil.

On the  night, I blanched the bok choi and asparagus spears before stir frying them.  And I cut up some red capsicum/peppers and stir fried those with onion and garlic and ginger.  The meat you see on the right is the duck …

And in the meantime, the sea bream and salmon fillet were steaming … 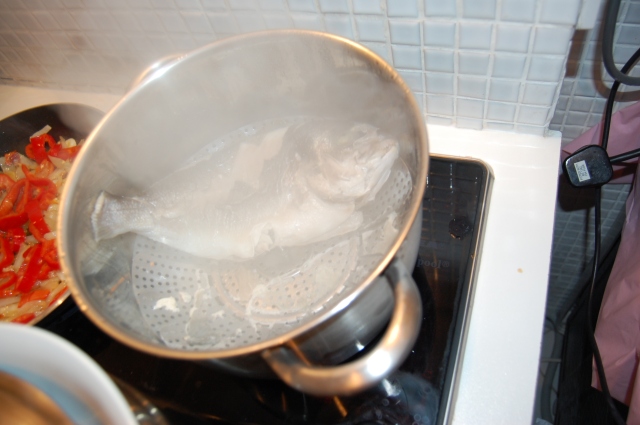 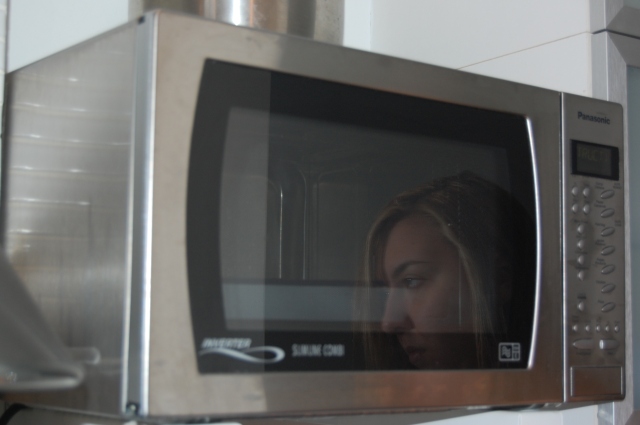 and I was getting more and more flustered with those electric burners, uselessly luke warm or incandescent and scarying me to death …

And here ends the photo gallery of the evening because I was seriously fed up at this point and in dire need of a good glass of wine … or two … and so on and we all just forgot to take any more photos after a while!

Let me, however, at least give you the recipe for the sea bream which is truly delicious and given to me by my daughter’s godmother Sing Mei from Hong Kong 21 years ago.

Steam the fish and remove the skin and fillet and put on a nice serving dish.  Cut up some spring onions and sprinkle over the fish.  Likewise, slice some ginger very thinly and scatter over the fish.  Tear some parsley leaves and shower over the fish. Cut up some garlic into thin slices and heat in a small saucepan with sesame oil until golden.  The oil has to get quite hot for this.  And then pour all this over the fish and listen to it sizzle.  Pour some soy sauce over it and chilli if you like, and serve with steamed rice.  Truly truly easy to  make and delicious to eat and diet-friendly too.

My son left after dinner and we girls carried on, chatting about this that and the other and contemplating life as we imbibed our nice wine and we saw the new year in and wished each other well and said our Gung Hai Fat Choy! Happy New Year! Gong Xi Fa Cai!  My sister and I were a bit worried about my friend who had an important work appointment the next morning and had to get up at 7:30.  We made up the futons and carried on contemplating life but my daughter decided it was enough contemplation for her and went to sleep.  Sensible girl ….

I am not sure what time we actually fell asleep but the alarm did go off at 7:30 and my sister and I somehow managed to get up and make my friend a cup of tea and some buttered toast with some amazing home-made marmalade given to me by some friends who love their food as much as I do.  This was a real testament to friendship on our part … my head was throbbing so much I could hardly speak and I felt very very very sorry for myself.  Miraculously, my friend, instead, was able to muster enough energy to hold a somewhat one-sided conversation which was only rarely punctuated by a ‘hmmm’ or ‘really?” by me or my sister and I was so out of it I couldn’t even open my eyes.  She is obviously made of stronger stuff.  We love her dearly and were suggesting she call in sick (not far from the truth) and she debated this for some time but in the end she got up, showered, dried her hair (oooh the horror of the sound of a hair dryer when a hangover rears its horrible head).  She left just before 9 and it was then that the workers who were renovating a flat next door started drilling and knocking down walls.  DRRRRRRRR and bang whack bang bang boom boom crash crash …. Waves of nausea danced within my stomach to the rhythm of the drilling … which went on for hours!

“It’s cruel … it’s just cruel …”, moaned my sister into her pillow over and over again.  “Ggggghhhhhmmmm” I retorted not daring to budge an inch in case the nausea got worse.

What a beautiful catastrophe!!!

My lovely daughter was the only one to feel fine and ministered to our ails with tea and toast and smiled tenderly and laughed thoroughly.

It wasn’t until about 3 in the afternoon that I felt well enough to talk properly and have a shower and get on with the rest of the day … but at least we were in the year of the rabbit!  HurraH!